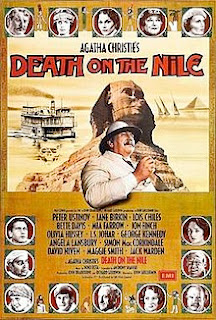 Is there anything more perfect for a Bank Holiday afternoon than an all-star Agatha Christie adaptation? Take a look at the TV schedules on those days and sure enough one of them will pop up. So on New Year’s Day, I took my place on the sofa for a welcome revisit to dastardly goings-on aboard a luxury cruise ship sailing down the Nile.

Simon Doyle (Simon MacCorkindale) has jilted his lover Jacqueline de Bellefort (Mia Farrow) in order to marry the fabulously wealthy Linnet Ridgeway (Lois Chiles). It’s a tricky love triangle – so you can imagine the newly-married Doyles are far from pleased to find Jacqueline popping up on their Nile cruise holiday. Things eventually explode into a confrontation between Simon and Jacqueline that leaves him shot in the leg and her sedated. While they are both out of the picture, Linnet is murdered in her bed. With the two obvious suspects out of the picture, who among the (all-star) passenger line-up did the deed? Just as well Hercule Poirot (Peter Ustinov) is on the ship to solve the puzzle.

Following on the heels of the smash hit success of 1974’s Murder on the Orient Express, the producers of that film didn’t really shake up the formula too much. Hire a load of star actors, pick one of Agatha Christie’s most picturesque-set novels and then watch the money come pouring in. Albert Finney wasn’t available to come back (rumour had it he wasn’t keen in any case on the huge amount of make-up involved) so instead Peter Ustinov came on board and away we went.

Death on the Nile feels very much like a film following a formula. Perhaps it struggles to live up to the first film because it is a slightly less compelling mystery than the first film (although still a damn good puzzle with a real twist of a solution). Perhaps it was more difficult to recapture the magic? Or perhaps it’s because it lacks the quality of direction that Sidney Lumet brought to the first film. Lumet managed to create something that always felt more than a vehicle for star turns – the more plodding John Guillermin instead feels like the sort of guy brought in to manage the day-to-day realisation of a producer’s vision (essentially the same role he fulfilled on The Towering Inferno). Death on the Nile feels very comfortable on the television perhaps because it is filmed in a very straightforward, unobtrusive style with less visual panache than many of the David Suchet series Poirots (even the earlier ones).

But the film does a good job in hiring Peter Ustinov. Ustinov has the comedic chops – matched with the acting prowess – to walk a fine line between the drama and the slight air of comedy that underpins the film. The sort of performance that tells everyone that this is essentially a Christmas treat and shouldn’t be treated too seriously – but still conveys enough of the character’s humanistic shock and anger at violence and murder. Poirot can very easily become a slightly ridiculous character, and Ustinov is canny enough to realise that (relative) underplaying of the character actually works rather well to make him engaging and entertaining, but not too heavy.

Not that heavy is the film’s problem, as this is a pretty light soufflé. The all-star actors happily go through their paces, although you can pretty much tell most of them are in this for the free holiday and the pay cheque. Most of them have fun with their parts – none more so than Angela Lansbury who goes way way way over the top as a bohemian novelist – but they pretty much go through the motions. Shaffer’s decent screenplay doesn’t do much in any case to sketch these characters out – and you suspect much of the bitchy duelling between Bette Davis’ selfish rich widow and Maggie Smith’s put-upon companion was spun out post casting.

Saying that, I was rather taken with Olivia Hussey’s performance as a fundamentally decent person in the middle of the madness, while Lois Chiles is good enough that you regret her career didn’t really go anywhere after this film. Simon MacCorkindale and Mia Farrow also do well with tricky parts. But it’s all pretty much paint-by-numbers stuff.

Visually the film looks lovely on the Nile. The costumes and designs are great – even if some of them look pretty much straight out of the 1970s rather than the 1930s – and you can tell that the money has been lavished on it to make a pure, old-fashioned entertainment. Shaffer’s script does a decent job of adapting one of Christie’s most twisty tales – even if it does give us what feels now a pretty racist portrait of the meek and crawling ship manager played by IS Johar.

But this is safe and comfortable entertainment – and it definitely is entertaining – rather than something that feels truly filmic. You could argue that this film more than any other set the tone for what we expect from an Agatha Christie adaptation – and its mixture of light comedy and grisly murder set in a lush 1930s location is pretty much de rigeur for everything else that follows. And you know what, I don’t think that’s a bad thing.
Email ThisBlogThis!Share to TwitterShare to FacebookShare to Pinterest
Labels: Agatha Christie, Angela Lansbury, Bette Davis, David Niven, George Kennedy, Jack Warden, Jane Birkin, John Guillermin, Jon Finch, Lois Chiles, Maggie Smith, Mia Farrow, Murder mystery, Olivia Hussey, Peter Ustinov