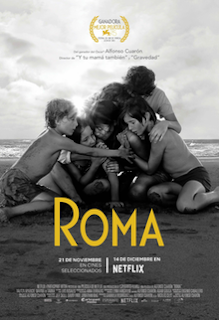 All great artists come from somewhere. Experiences fashioned and moulded them. And great storytellers often feel an urge to dramatise and explore their own backgrounds, to bring these events that formed them as artists to life for a wider audience. It’s what Alfonso Cuarón does here with his semi-autobiographical Roma, a Federico Fellini-inspired meditation on events from his own childhood and upbringing, filmed with magnificent, patient lushness.

Despite its semi-autobiographical nature, Roma actually revolves not around the young version of Cuarón (he in fact is hard to identify in the film, but is probably the imaginative younger son Pepe) but Cleo, the family’s live-in maid. Set in 1970-1, the household comprises a middle-class Mexican family (husband a doctor, wife a chemist) and three live-in servants. The film follows a year or so in the life of the family and Cleo, including her surprise pregnancy and the repercussions of that on Cleo, as well as the impact of troubles in the marriage of the parents Antonio and Sofia.

Cuarón’s debt to Fellini’s semi-autobiographical films, which turned his own childhood and career into a sort of filmmaker’s fable, is clear – heck even the title itself is a clear nod to Fellini’s own childhood story also titled Roma. It’s a poetic presenting of a version of events that may have happened to the filmmaker, and it feels personal and filled with meaning.

This Roma is a lusciously filmed, gorgeously meditative, visual treat. Shot in crisp and clear black and white, the camerawork is sublime – slow and gentle, carefully following events. Several shots use a slow dolly shot in an arc, to give the feeling of your head turning to take in scenes and the events within them. Cuarón presents a string of arresting and beautiful images, and the film’s lyrical observational tone – like a gentle Mexican Mike Leigh fable – lets the action soak over the viewer and lure you into caring for the characters and the events.

I say that, because actually very little happens for large chunks of this film, other than following the lives of the family and the everyday events they deal with, from cleaning up dog’s mess from the drive, to trips to the cinema. It’s this air of ordinariness, this lack of event, that gives the themes bubbling under the surface a lot of their strength – namely the shock pregnancy of Cleo and the clear marriage break-up taking place between the two parents. These darker themes – as well as the potential political radicalism of one minor character – are dangerous undercurrents that threaten, but don’t overwhelm, the normality of many of the events. Cuarón lets them play as subtext, while keeping the event and drama to a minimum – this helps make the drama feel extremely real. 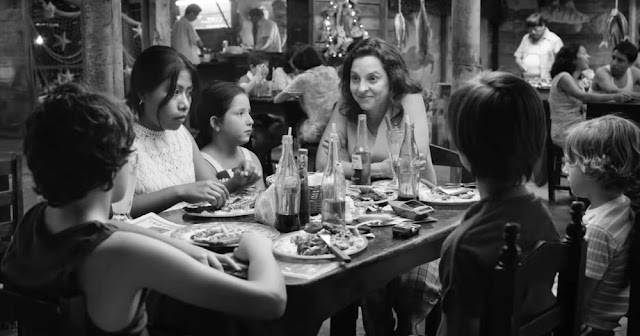 However, it also means that when these themes start to pay off into more traditionally dramatic events in the final quarter of the film, it carries a surprising and sudden emotional force that caught me off guard. Somehow, from just living in and among this extended family, and essentially observing their day-to-day life, it set me up to invest even more in the turmoil that threatens their happiness, as those darker currents that had been kept under the family’s (and the film’s) radar burst up onto the surface. So suddenly, at the end of the film, I found myself actually choking back a few tears at the genuine and real emotion that the film suddenly gives us.

This is helped by the naturalistic performances of the cast of non-professional actors. I often feel that the reality of performances like this, this neo-realism approach of encouraging people to play versions of themselves, a la Bicycle Thieves, is as much to a tribute to the patient, gentle and subtle direction of the film-makers as it is to the actors. Cuarón certainly worked with his cast here – shooting the film sequentially to help the actors develop their performances as the film’s story itself develops. Saying that, Yalitza Aparicio is intriguing as the dedicated maid and I was extremely taken by the strength of Marina de Tavira as the mother holding her family together.

What I found less successful about the film was the fact that this story is meant to be about Cleo, but I’m not sure what we really learn about her. Cuarón partly covers her lack of experience by reducing her dialogue to a minimum and letting her eyes convey her story. It’s just I’m not sure what story there really is. Events happen to her – and clearly take an emotional toll – but it never feels (to me) that we get an insight into her character, to her real inner life. We get glimpses but she remains a slight cipher for events that happen to her: what impact do they have on her? How does she change? What does she learn? Crude as “learning” can be in drama, Cleo feels basically the same at the end of the film as she does at the beginning.

In fact if this film was in English, or set in England, I can imagine it being savaged for its presentation of the servant as a woman who seems to define nearly all her life by her dedication and service to her employers. There is a certain sweetness at Cleo being treated like one of the family, and covered in warmth and affection, but she still gets ordered to clear dog shit off the drive. If Downton Abbey is often criticised for the paternalistic view the employers have of the lower classes (sweet as it is to see the care and concern Sofia treats Cleo with), surely this film is guilty of it as well? The film also flips this with those same lower classes integrating their own contentment with those of their masters. At times Roma feels like a man paying tribute to his nanny by saying “she went through terrible things, but the important thing was she was always there for us”. Which somehow points exactly at how much he really knew about this person, even if the film seems to show the warts and all of her life. 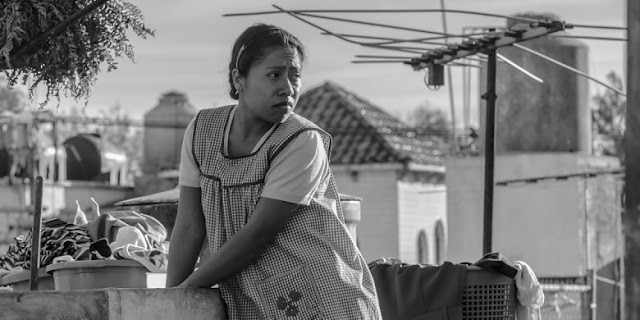 Roma is a beautiful and poetic exploration of a childhood – but it feels like it has the understanding of a child. It doesn’t really scratch below the surface to give us the adult perspective, to interpret what the adults are thinking and feeling. It treats the audience like the children – we see things, but we don’t get down into the emotional depths of its characters’ stories. Don’t get me wrong – there are scenes laced with emotional force – but it’s because scenes such as tragic childbirth or danger to children are going to carry emotional force regardless. It doesn’t feel like the depth is connected to the characters. For all the time we spend with Cleo, I couldn’t describe at all what she is like or who she really is (except maybe “long suffering”, “dedicated” or “kind”). For all the film’s beauty, charm, poetry and joy it’s somehow, ever so slightly, empty.
Email ThisBlogThis!Share to TwitterShare to FacebookShare to Pinterest
Labels: 2018, Alfonso Cuarón, Biography, Marina de Tavira, Mexican films, Netflix, Yalitza Aparicio