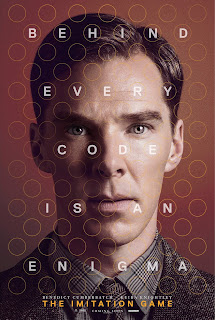 “Sometimes it is the people no one imagines anything of who do the things no one can imagine”. If there is anything that captures the smug self-satisfaction of this ludicrously pleased-with-itself film, it’s that convoluted phrase, with which the film is so pleased that it is repeated no fewer than four times. What does it mean really? Nothing of course, it carries all the meaning of a fortune cookie. Turing is certainly someone whom you could expect something of, since the film is at pains from the start to demonstrate he is a maths prodigy and a genius. But then that would spoil the romance of the film suggesting that because Turing is socially maladjusted, he is somehow unlikely to achieve something – or that achieving something would be even more special having overcome the “disability” of his personality.

Alan Turing (Benedict Cumberbatch) is under police suspicion in 1951 after a mysterious break-in at his Manchester home. A keen detective (Rory Kinnear) suspects he may be a Russian agent – why else does he have no military record? But we know different, as flashbacks show Turing working at Bletchley Park on the cracking of the German cipher machine Enigma. Working with the support of an MI6 officer (Mark Strong), Turing has to win the trust of his team – with the support of best friend and maths genius Joan Clarke (Keira Knightley) – to build a ground-breaking computer that could crack the impossible code. But back in 1951, Turing is in trouble: he’s gay and that’s a crime in post-war Britain.

Now, Turing’s personality in this film. In real life, Turing was an eccentric, but perfectly capable of functioning perfectly normally in society. That’s not dramatic enough for the film, so Turing is reimagined as someone practically afflicted by Aspergers syndrome, incapable of understanding or relating to people without severe effort and prompting. Of course this is really there to introduce conflict – first with his team (who need to be won round to loving the old eccentric genius), secondly with his boss (who can’t stand his inability to fit in) and thirdly with the police (who can use it to write him off). It’s a film-disability for a character to overcome, another puffed up triumph that we can celebrate, while at the same time pat ourselves on the back because this is a victory for those “not normal”. But it’s probably bollocks.

But then that fits in rather nicely with the whole film, which is more or less probably bollocks from start to finish. The film of course can’t dramatise maths or computing very well, so it throws us all sorts of feeble clichés from tired old film genres instead. Charles Dance plays a reimagined Denniston (in real life a cryptographer) as a standard obstructive boss who all but shrieks “you’re off the case Turing!” at the one-hour mark. The key moment of inspiration of course comes from flirty pub conversation with a charming secretary. Running around and frantic throwing of papers takes the place of all that boring maths.

The film can’t resist any level of dramatic cliché. When a member of the code-breaking team mentions in passing “I have a brother in the navy you know”, as sure as eggs is eggs you can bet the team will decipher a message that could save his life but will be forced to make A Terrible Choice. Of course even this picture of a small code-breaking team making the calls themselves over which messages to act on is nonsense – it’s a decision that would be so far above their pay grade, they should be taking oxygen just thinking about it. But in this bonkers version of the universe, Turing  himself makes the call to keep the initial breaking of the code a secret, and the government happily allows him alone to make the call about which codes to act on. Oh for goodness sake, spare me.

But then this is a film that wants to turn Turing into the man who won the war single-handed. While Turing was one of the key figures who made the breakthrough, this was a massive team effort, not one man’s inspiration, and reducing the victory of the war down to one (film cliché) difficult genius is the same old ripe nonsense we’ve seen many, many times before. The film tries to pretend that Bletchley Park and the breaking of Enigma, and Turing himself, is an unknown story – when it’s been pretty well-known since it was announced by the Government in the 1980s.

The film is rubbish, but it’s also gutless. Of course “fifth man” John Cairncross is part of the team – and of course Turing discovers he is a spy. (The reveal of course is due to the same old tedious movie cliché of “I found a book on his desk that was the key book he used for the code”.) And then in a moment of stunning tastelessness, Cairncross blackmails Turing into keeping his mouth shut which he agrees to do – an action that, if it had ever happened in real life, would have been an appalling moment of treachery from Turing, and reinforces all the suspicions of the time that homosexuals couldn’t be trusted.

Ah yes, homosexuality. This film is very, very, very proud of its crusading actions to expose the cruel treatment of Turing for his homosexuality. At the same time, the film is of course way too gutless to even begin to show Turing doing anything actually gay (he doesn’t even so much as hold another man’s hand) during the film. The one genuine moment of love the character is allowed to express, is in the form of a crush on a schoolfriend. (The film substitutes renaming Turing’s machine “Victory” after this school friend “Christopher”, the film keen to try and plug the gap of this film featuring virtually no LGBTQ content at all). But the film preaches intensly and proudly about the equal rights of homosexuality, while veering away with squeamishness from putting anything remotely homosexual on the screen. 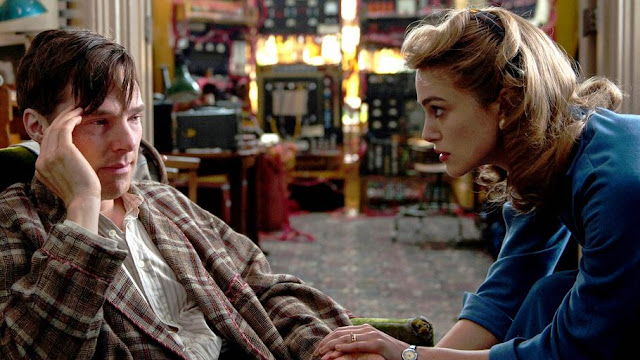 The shoddy writing, over-written and self-important, is matched up with Morten Tyldum’s flat, “prestige” film-making that reduces everything to a chocolate box. The film does have some acting beyond what it deserves. Benedict Cumberbatch is good as Turing, although his performance is a remix of some of his greatest hits from past projects, from Hawking to Sherlock, and you feel hardly it’s a stretch for him – even if he plays with it real, and genuine, emotional commitment. Keira Knightley’s cut-glass accent is practically a cliché, but this is one of her best performances with real warmth and empathy. Most of the rest of the cast though are serviceable at best.
“Serviceable”, however, is still better than the film itself, which is a cliché-ridden, gutless, plodding and highly average pile of nothing at all – a totally over-hyped, over-promoted and completely empty film that is about a zillion times less interesting, brave or revealing than Hugh Whitemore’s 1980s play Breaking the Code. Not worth your time.
Email ThisBlogThis!Share to TwitterShare to FacebookShare to Pinterest
Labels: Allen Leech, Benedict Cumberbatch, Biography, Charles Dance, Keira Knightley, Mark Strong, Matthew Beard, Matthew Goode, Morten Tyldum, Rory Kinnear, World War Two