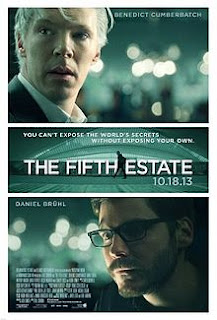 In 2010 the world was thrown into turmoil when a website called Wikileaks published a host of top-secret government documents that revealed a never-ending stream of Western wrong-doing during the war on terror. The leak was co-published by WikiLeaks and the Guardian and New York Times. However Wikileaks founder Julian Assange (played here by Benedict Cumberbatch) had other ideals – namely that the files should not be redacted in any way to protect serving US officials or informants in hostile countries.

It should be a gripping story of the state failing to keep up with the speed of modern communications. But instead this is one hell of a turgid, dull info-dump of a film that turns this potentially explosive event into something about as gripping as watching a series of people type into a computer. On top of that, the film totally fails to develop any proper personality dynamics to engage your interest, and instead falls back into the usual crude filmic language of a star-struck protégé realising his mentor has feet of clay.

Bill Condon’s direction is totally incapable of making the entry of data into a computer dynamic or visual, and is completely unable to bring the world of computer hacking and data search to life. In fact, there is so much information given to the viewers (rather than drama) that the impression I was left with is that Condon doesn’t really understand what’s going on in the movie anyway. He certainly doesn’t manage to make it interesting or feel that important.

Visually, the film is flat and falls back on superimposing text on the screen when people type or creating a sort of “mind palace” office to represent the inner workings of the Wikileaks server (which is basically just a big office space). In fact, the film gets less interesting as it progresses – which is a real shame after a nifty credits sequence that chronicles in images the development of the press from cave paintings, through the Rosetta stone, printing, television and the internet.

Not to mention the lack of drama about this. Things are just happening – we never get any sense of the danger or the world-changing impact, or any reason why we should care. Poor Anthony Mackie, Laura Linney and Stanley Tucci are wheeled out as a trio of American government big wigs who talk at each other at great length about what is going on and how it will endanger government assets – but it’s all show and not tell. The plight of a Tunisian informant – played with his usual skill by Alexander Siddig – is reduced to a few scenes, a human element that gets trimmed so much it carries little impact.

The film also deals with the personality clashes Assange inspires, here interpreted as a borderline sociopathic monster, an egotist and liar interested only in his own legend. Benedict Cumberbatch gives a superbly detailed and richly observed impersonation of Assange, but the character has no depth. He’s merely a sort of phantom monster, who the film slowly reveals has no conscience. Compare it to the presentation of Mark Zuckerberg in The Social Network (a film that is everything this clunking disaster is not). That film is also told from the prospective of a disillusioned former colleague, but there our view of the central character is shaded and given depth – and we are encouraged to recognise we are seeing one person’s perspective. Here the film swallows whole the side of the story presented by Daniel Berg.

Berg played with a disengaged flatness by Daniel Brühl, snoozing through a part shorn of any dynamism, whose views oscillate constantly until he finally settles for being a campaigner to keep sources safe. Alicia Vikander gets shockingly short shrift as a girlfriend – she even has the obligatory “stop working on the management of earth-shattering leaks and come to bed” scene. Berg allies himself with the traditional media, similarly portrayed with a clunking obviousness: David Thewlis is a standard shouty journalist, Peter Capaldi a chin-stroking concerned editor.

The Fifth Element is flat and unable to dramatise the world of computer coding. The dialogue is turgid and obvious (there is a terribly obvious metaphor of Assange constantly lying about the reason for his white hair – he can’t be trusted you see!) and the performances are either dull, clichéd or saddled with this terrible writing. At the end, as Cumberbatch plays Assange denouncing the entire film in a reconstruction of a talking head interview, you get a sense of the more interesting, fourth-wall-leaning film this might have been. But sadly the rest of the film reminds you what a flat, tedious, stumbling, confused, inexplicable misfire this really is.
Email ThisBlogThis!Share to TwitterShare to FacebookShare to Pinterest
Labels: Alexander Siddig, Alicia Vikander, Anthony Mackie, Benedict Cumberbatch, Bill Condon, Biography, Carice van Houten, Dan Stevens, Daniel Brühl, David Thewlis, Laura Linney, Peter Capaldi, Stanley Tucci