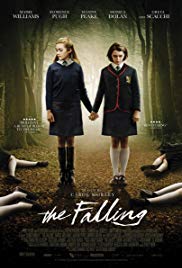 Any film set in an all-girls school that succumbs to hysteria, with ominous goings-on that might be supernatural or might all be allegories for coming of age and emerging sexuality, is inevitably going to get compared with Picnic at Hanging Rock. But few films seem to be so desperate to be that film as The Falling does.

Set in an all-girls school in 1969, at the cusp of the sexual revolution that will soon engulf the whole country, Lydia Lamont (Maisie Williams) and her elder brother Kenneth (Joe Cole) are both obsessed with Lydia’s charismatic classmate Abigail Mortimer (Florence Pugh) – feelings of emotional and sexual dependency that Abigail knowingly encourages and flirts with. After Abigail’s sudden death connected to her pregnancy, Lydia becomes increasingly disruptive at the school and finally becomes “patient zero” in an epidemic of fainting that afflicts the school.

Based on a true story, you can tell that this film is keen to conjure up some sort of deep-rooted mystery at the heart of the girls’ actions, questioning whether they were truly in control of their own actions at this time or under the influence of something else. Is this linked directly to the tragic fate of Abigail – is she in some way possessing the girls, driving them towards this fainting? Or is the fainting just a sort of acting out, as Lydia tries to get over her grief at the loss of her friend?

Frankly, who really cares? It’s pretty hard to get invested in a film that is working so hard to be meaningful that it overshoots the mark and just becomes tiresome. Yeah I get it, teenage relationships can have this unhealthy intensity to them. They can spin out into self-destructive elements. And maybe, if the film had focused more on that rather than trying to suggest some unsettling mystery it might have got further. But with every shot of the British countryside around the school, or the lingering shots on the girls writhing on the floor, or the unsettled terror of the teachers, you feel the film’s attempt to invest these events with meaning.

What you actually end up feeling, throughout this overlong and puffed up film, is impatience at the indulgence of these children. Far from a mystery, the fainting appears to be a tiresome, attention-seeking effort from young girls unable to express and process emotionally the things that have happened to them. There isn’t a single element of the film that makes you seriously consider some ghostly or psychical explanation for the events – they seem, clearly and throughout, to be manufactured by the girls involved. It’s hard to watch it without unsympathetically suspecting that if the adults around them stopped indulging all this nonsense, they’d miraculously recover soon enough. It’s possible to speculate over whether the girls are doing it deliberately or if this is the work of their overwrought subconscious – but while that could form a good premise for a film interested in group psychology, this film seems more interested in pretentious shots of trees.

As if realising halfway through that it’s not come up with anything compelling yet, the film hastily throws in a poorly developed incest plotline, which is unsettling, illogical, and springs from nowhere. Not content with that, it then shoe-horns a rape into the backstory of a character late on, in a way that is clearly meant to be a dark reveal, but is in fact a really clumsy “obviously this caused all the problems” solution to the questions of the film. The character’s mental health problems and inability to bond with her closest family could have made for a complex and challenging character (and she’s certainly played by an actor who could’ve handled that material). Instead, rape is casually chucked in as a glib explanation for “oh and this is why she’s troubled – ta-da”. It’s cheap and lazy. But then that is on a par with all the sexual awakening content of the film, which is clumsy, clunky and often misguided. It wants to suggest an unsettling fascination with sex, and tie that in with dangerous, subversive ideas. Instead, it just ends up looking like standard teenage experimentation, filmed with a certain amount of style.

This is not to say the film is badly made as such. It looks good and it’s put together well. It’s just trying way too hard. The acting is very good. Maisie Williams is never anything less than watchable as Lydia, and creates a well-drawn character as a girl who goes from easily-led hero worshipper to the troubled centre point of disruption at the school. Florence Pugh is also a revelation as Abigail – a charismatic presence that you instantly believe would be obsessed over by everyone who knows her. Joe Cole is also very good as the creepy, sexually exploitative brother. There are some good performances from the adults, not least Maxine Peake as Lydia’s nervous, agoraphobic mother.

But none of this cancels out the laboured pretension of the rest of the film, which always wants to let you know how clever it is, and how much it wants you to question the impact of all that dark sexual awakening. Instead, for all the sturm und drang, it ends up looking rather like a collection of silly girls who are acting out. The idea that obsession with Abigail draws rebellious and transgressive feelings from Lydia seems painfully obvious and unoriginal, and the flirtation with incest, rather than invested with meaning, instead feels like a film straining to shock.

The Falling wants to be a great cult classic. Neither of those words can be applied. It’s a well-made but empty spectacle, living in the shadow of other much better films. For all the skill of Maisie Williams and Florence Pugh, it misses the greater depth it is aiming for and settles for being a rather shrill would-be ghost story and a plodding attempt at social commentary.
Email ThisBlogThis!Share to TwitterShare to FacebookShare to Pinterest
Labels: 2014, Carol Morley, Florence Pugh, Ghost stories, Greta Scacchi, High school drama, Joe Cole, Maisie Williams, Matthew Baynton, Maxine Peake, Monica Dolan