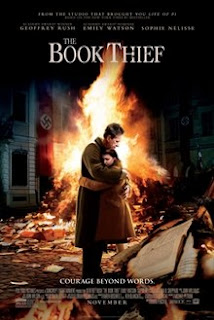 Every year you get prestigious film versions of novels that have soared up the bestseller lists. Some of these are good or even great films. Other are so lifeless, listless and lacking in spirit they leave you wondering what on earth people got so fussed about the original for. That’s the case here with The Book Thief.

In late 1930s Munich, young Liesel (Sophie Nélisse) is fostered with a local decorator Hans (Geoffrey Rush) and his wife Rosa (Emily Watson). Liesel has a fascination with books – despite not being able to read and write – and soon Hans is teaching her literacy. Liesel has a compulsion to “borrow” books – first from a burning pile of Nazi forbidden tomes, then from the library of the wife of the local mayor. But it’s dangerous to draw too much attention to the family, particularly when they are hiding a young Jewish man, Max (Ben Schnetzer).

I’ve not read The Book Thief. I can’t say that I feel the need to dash out and do so after this bland, middle of the road picture that makes Fascist Germany seem very picturesque. The film largely fails, like so many films before it, to translate the joy of reading into a visual language so the whole “book thief” concept of the title quickly gets pushed to the margins in favour of a series of episodic events based around Nazi Germany and Second World War tropes that already feel a bit tired.

Percival’s award-baiting film doesn’t seem like it wants to bring (or is capable of bringing) something unique or interesting to the setting, instead going through the motions as prettily as possible. And the film does look great, I will give it that. It also sounds pretty damn good, not least through a playful and rich score from John Williams (his first original score for a non-Spielberg film for decades). But it never really gets anything special from the content. In fact, that very chocolate-box beauty of the film seems to run contrary to the setting of Nazi Germany. The awards-friendly beauty envelops the film like treacle.

The book was written from the prospective of Death, but, the film seems to drop this unique aspect as soon as it possibly can. Again, it’s a sign that the film cannot reproduce what worked in the book – by stripping out its most unique and interesting point, it makes the film feel as generic as it possibly can. Roger Allam is a wonderful choice as the richly voiced narrator – but he’s so rarely used in the film that when Death talks about how fascinating he found Liesel you are simply left wondering why.

In fact that why is a real problem with the film – it’s what you’ll be asking all the way through. Why? Why is anything really happening? Why is Death telling us how different and striking this story is when everything we see in the film feels pretty familiar? What is the point of this film or the message it is trying to give us? For a film that tackles war, fascism, persecution of the Jews, and childhood innocence, it seems empty all the time.

And that’s the problem with the film. It’s all about the pretty presentation. The characters speak with forced German accents that make it feel even more like a pretty Hollywood Golden Age film. (By the way the bad Germans, like the Nazis, they speak only in German. Make of that what you will.) The acting is pretty good, Sophie Nélisse is a great find as the heroine. But there is nothing special about it at all. It’s seemingly made entirely as a prestige product for potentially winning Oscars. Any of the depths of uniqueness of the book seems to have been shaved off in service of that, and we’ve been left with a chocolate box that feels like it’s lacking the sweet richness you’d expect to find in it.
Email ThisBlogThis!Share to TwitterShare to FacebookShare to Pinterest
Labels: 2013, Ben Schnetzer, Brian Percival, Emily Watson, Geoffrey Rush, Literary adaptations, Roger Allam, Sophie Nélisse, World War Two