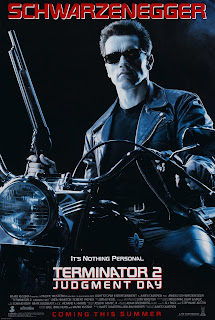 Schwarzenegger always said he’d be back. And if there’s one film that perhaps explains the, otherwise fairly inexplicable, success of this former body-builder who can’t really act as one of the greatest film stars of the early 1990s, it’s Terminator 2. And this film makes quite the calling card, as it can make a strong claim to being one of the greatest action films and one of the greatest science fiction films of all time. Its influence permeated Western culture – quotes from it are recognised all over the world – and its brilliant mixture of Armageddon-tinged high-brow time thinking with truck chases and lots of shooting has led to increasingly feeble attempts to recapture the magic with innumerable crappy sequels.

After the events of the first film, John Connor (Edward Furlong) is now a tearaway teenager while his mother Sarah (Linda Hamilton) is in an institution. So: perfect time for Skynet to send back another Terminator to take out the future leader of the resistance. The resistance sends back its own champion. But, handy-dandy, which is which? Is Arnie playing the baddie once more? Or is Robert Patrick’s unnaturally still non-descript looking fella really an evil Terminator? The answer is only a shock to anyone who has been living under a rock since 1991 (even the film’s original publicity gave the answer away). Soon Arnie’s reprogrammed good Terminator and the two Connors are on the run from Patrick’s liquid metal shape-shifter – and hatching a plan to prevent original Skynet inventor Miles Dyson (Joe Morton) from finishing his life’s work.

Terminator 2 hasn’t dated a bit. It’s still one of the very best rip-roaring, balls to the wall, action films ever made. It is essentially set piece after set piece – but with the set pieces strung together with intelligently written scenes that juggle interesting themes with sharply drawn, realistic characters. Cameron’s direction is, I might almost say, faultless. The film balances bangs and shoot-outs with such impressive zeal and imagination that you will wear out the edge of your seat. But the main reason these sequences work so well is because you care so deeply for the characters in the film, you invest so much in the story of the movie.

I think it’s possible no one does this sort of thing better than James Cameron. Certainly no-one ever gets more out of Schwarzenegger than his directing Svengali. Perhaps because only someone as dementedly determined as Cameron would never feel intimidated by an ego as large as Arnie’s. Cameron gets here, hands down, Arnie’s greatest ever performance. No wonder Arnie has tried to re-launch the franchise so many times, he's never been able to recapture the magic from this film. Gifted with the ability to learn, here the Terminator becomes (within its robotic programming, perfect for the stiffness of Arnie’s skill with dialogue) a surrogate father figure for John, a creature increasingly capable of caring for and emulating human behaviour. And Cameron draws out of Schwarzenegger a performance striking for its growing mellowness and gentleness, its slowly developing emotional openness and humanity. 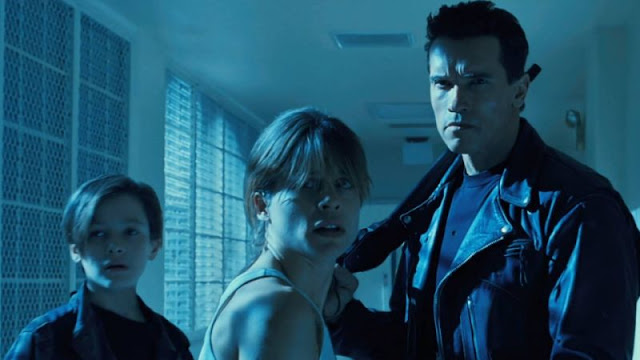 It should, by rights, be corny as hell – the saga of a drifting boy given some shape and purpose in life by a father figure who showers him with love and attention. But it really works. Cameron understands perfectly when to throttle back on any possible schmaltz, and instead keep the characters strikingly real. Connor is a surly teenager, but also someone looking for love. The Terminator understands humanity more and more, but is still a machine. The barriers make the moments when emotions force their way through genuinely moving. And it also means that you deeply invest in this rag tag group of people staying together and saving each other.

And the stakes are against them when they are up against an opponent as fearsome as Robert Patrick’s shape shifting T-1000. Cameron’s initial concept for the Terminators – before the studio suits pushed the fortunate casting of Schwarzenegger on him – had been for them to be non-descript looking, average types. Patrick, with all due respect, fits that exactly – and has the additional dark sting of being disguised as a cop almost throughout. He gives the part a cold, mechanical chill, a total lack of empathy or any emotion that contrasts with the growth of those abilities in our hero Terminator.

The special effects used to create the liquid, shape shifting T-1000 were ground breaking at the time (and contributed to this being the most expensive film ever made) and they are still bloody impressive today. The T-1000 effortlessly shifts between states and skilfully reforms its body to become new people. When under attack, it convincingly has holes blasted into it from shot guns, becoming strange Thing-like abominations before restoring its original shape. It looks extraordinary – helped as well by the steel-like chill of the film’s cinematography that covers every shot in the cities and much of the film’s second half in an icy blue.

Cameron’s film has that icy feel to it, as we never allowed to lose the dread of the future apocalypse. In fact, Sarah Connor is herself a constant physical reminder of it. Played by Linda Hamilton with the sort of fire and determination that turned her into a cult figure, Sarah Connor has pumped herself up to the Nth degree for the wars to come. However, she is a damaged, tragic figure, lost in grief, whose every dream is haunted by visions of dreadful nuclear Armageddon. How could you forget what is at stake, when it’s in every shot of Linda Hamilton’s eyes?

That’s even before the high-stakes action Cameron throws at the screen. The film is built structurally around four, equally different, action sequences and, while each of them has dim echoes of events we saw in the previous Terminator film, they are delivered with such panache and aplomb that it doesn’t really matter. Cameron of course manifestly understands that these sort of sequences mean nothing at all anyway unless we care about the characters involved, so the narrative focus of the film is tightly concentrated on no more than five characters, each of whom we see learn, grow and develop as the film progresses (even the evil T-1000 excels himself by becoming more smarmy, vile and even sadistic as the film progresses). 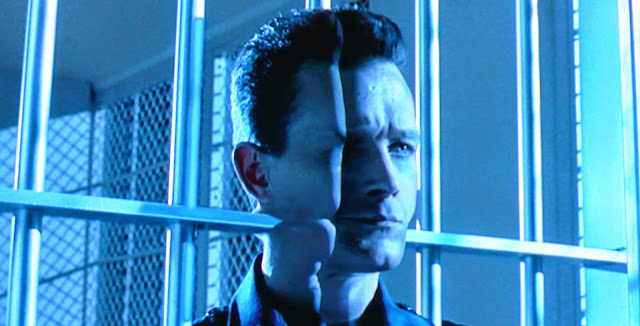 Because, much as you might want to mock some of the comedic buddy play between John and the Terminator, it adds an emotional heart and heft to the film. It’s two characters who have no real emotional connections at the start of the film, learning over the course of the film to love each other. Yes it allows for some wonky, dorky comedy from Schwarzenegger – a well the series would drain dry in future films – but it works an absolute treat here. Throw in Linda Hamilton as the archetypal cold warrior (wisely she passed on most of the future sequels that were to follow) and you had a pretty much perfect family unit to invest in.

Cameron also manages to give the film a gloomy but not domineering sense of dread, but punctures it with hope. It’s a film that is all about the future impacting the past – but also keen for us to understand that the future is not written, that our fates are not set, that both can be what we make of them. The film’s conclusion (changed from the original ending) of an empty road, heading we know not where, is a neat visual metaphor for our unknown futures. It may be a dark, forbidding, road – but we don’t know where it’s going for sure.

Terminator 2 is one of those cast iron classics that never gets old. It’s also the last Terminator film you ever need to see. All other entries are little more than superfluous retreads after this. It’s a pitch perfect balance of action and emotion and it’s always a treat and never a chore to watch it.
Email ThisBlogThis!Share to TwitterShare to FacebookShare to Pinterest
Labels: Action Films, Arnold Schwarzenegger, Edward Furlong, Epatha Merkersen, James Cameron, Joe Morton, Linda Hamilton, Robert Patrick, Science fiction, Terminator