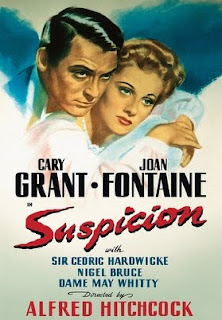 What do you do when you suddenly start to believe you might be living in a murder mystery? When you begin to think that the person you are married to might just be planning to dispatch you as well? That’s the big suspicion that haunts the mind of Lina Aysgarth (Joan Fontaine), a shy and meek heiress who has been charmed into marrying waster Johnnie Aysgarth (Cary Grant), a lazy spendthrift and playboy. After they elope together, she quickly finds out that Johnnie has no work ethic or talent at all other than spending money. As real estate deals fall through, and Johnnie steals money from his employer to cover his debts, Lina starts to worry that her life insurance is looking more and more tempting to Johnnie.

Suspicion is a decent, middle-of-the-road Hitchcock thriller, which deals with familiar themes of doubt, dread and (of course) suspicion, but with Hitchcock very much in second gear. He’s not helped by the neutering of the source material. The original novel is very much a story of a woman who works out that her husband is definitely trying to kill her. The producers here, however, couldn’t abide the idea that CARY GRANT could be plotting to kill his wife. So the story is rejigged at the end to turn Lina into a silly, paranoid woman and Johnnie into, well yes a playboy, but also one who has been treated badly because of the suspicion thrown at him. This may have flown in 1941, but it’s impossibly sexist today. Plus it means the whole film basically builds towards – well – nothing.

Hitchcock throws in the odd decent flourish – most famously the carefully lit glass of milk that Johnnie carries up the stairs near the film’s end, which may or may not be poisoned. But far too often the story seems to be taking place in a fairytale England, of horses riding to hounds, country villages, Agatha Christie style authors dispensing accidental poisoning advice, and careful class structures. For all the odd moments of danger, the film is safe, contained and as unthreatening as it can get. But the rest is Hitch on autopilot, which feels at time as a remix of the director’s earlier Oscar winning film Rebecca.

That mood carries across to Joan Fontaine as well in the lead role. Fresh off working with Hitchcock on Rebecca, Fontaine essentially recreates the same role again here as the timid, shy, would-be dutiful wife who wants to see the best in a husband who in fact seems dangerous and unknowable. Fontaine won the Oscar for this film – but it feels as much like a compensation award for her previous defeat for Rebecca as it does for Suspicion. Really she does very little here that lifts the film, or stretches her as a performer from her previous role. It’s a retread, and while it’s a trick she does well, it’s a trick she has done before.

A far more challenging performance comes from Cary Grant, who uses the role as a clever meta-commentary on his own persona. Johnnie has all the charm and engaging bonhomie of Grant himself, but all subtly twisted with a selfish superficiality and wastrel greed. Grant walks a very fine line of a man who could be plotting to murder his wife or could just be a greedy chancer – and walks it very well indeed. You always see that Johnnie is bad news, while also understanding why Lina finds him so engaging. It’s a terrifically skilled performance, a lovely riff on Grant’s own screen persona, that shows he’s a far better actor than people often give him credit for – and you feel he is only too willing to embrace the chance to play a weak-willed, opportunistic murderer with little conscience (except of course it turns out he isn’t a murderer).

It’s a shame that nothing else in the film really rises to the occasion in the same way (although Nigel Bruce gives a very good performance as the gentle, ageing playboy Beaky). The film itself never really seems to be heading anywhere – it even takes a good two-thirds of its runtime before Lina begins to wake up to the fact that Johnnie is far from being the sort of husband women should dream of. It’s a bit slow, a bit too safe, and it largely lacks the element of danger. For the final few scenes, logic seems to evacuate the film as all the clues and hints we’ve had building towards us are shown to be – nothing more than red herrings and the inferences of a silly woman. Because, after all, CARY GRANT can’t be a murderer can he? No matter what he wants.
Email ThisBlogThis!Share to TwitterShare to FacebookShare to Pinterest
Labels: Alfred Hitchcock, Auriol Lee, Cary Grant, Cedric Hardwicke, Isabel Jeans, Joan Fontaine, Leo G Carroll, May Whitty, Murder mystery, Nigel Bruce