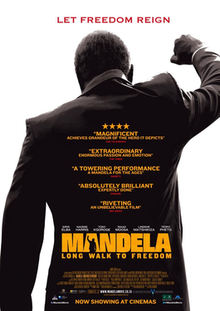 In the 1980s, hagiographic epic biopics that aimed to tell the story of the subject’s whole life were all the rage. In fact they were frequent Oscar behemoths. It’s easy to imagine that, if it had been released 20 years earlier, Mandela: Long Walk to Freedom would have been garlanded with awards for its attempt to capture every major moment in Nelson Mandela’s life from birth to his becoming President of South Africa. Sadly for the film, it wasn’t.

The fashion nowadays, for biographical films about major figures like Mandela, is to make a focused story about one key incident in their lives and from that build up an understanding of what made the man. Spielberg’s Lincoln focused on the immediate struggle to get the abolition bill passed. Du Vernay’s Selma looked at Martin Luther King’s involvement in the Selma marches. Eastwood’s Invictus looked at a newly-elected Mandela trying to use the Rugby World Cup to bring a nation together. Mandela: Long Walk to Freedom ironically goes the opposite way and tries to sprint through every single event of Mandela’s life. Doing so, it manages to be a less affecting, less involving and less engaging film than Invictus.

The rush is so intense to get through events that every scene feels like it has been cut down to deliver the vital bullet points and nothing more. Scenes rarely go over a couple of minutes, and most are comfortably under a minute. The general structure of most of them is roughly the same: a character will argue with Mandela (if black) or say something distasteful or racist (if white), Mandela will say something wise and inspiring that sounds like a direct quote from the book. Cut to the next scene.

This means that events fly by with little context and no real understanding. In fact, it feels like without having read the book and boned up on South African history in advance, most of it will mean nothing to you. Years can go by with a single snip of the editor’s scissors. Clashes and riots – particularly in the final third of the film – take place, but we are given no idea why or what the root causes of them were.

Other events skim by so quickly that they lose all meaning or dramatic impact – in about 15 minutes of the film we cover Mandela arriving at Robben island, ill treatment and contempt from the guards, Mandela’s resolution that they will gain the right to wear proper trousers as a step towards being treated as humans, abuse from the prison governor, Mandela learning to control his anger, the prison governor leaving, a new governor arriving off camera, the regime lightening and finally the prisoners celebrating getting their trousers. If you think that sounds rushed here, imagine what it feels like watching it. All the narrative links between the scenes are severed – how did Mandela win the right to wear trousers? We have no idea. It sounds like a little thing, but it’s symptomatic of the problems of the film.

This is despite a promising start, with a young Mandela fighting for justice and against prejudice in the courts of South Africa (winning cases because the racist whites refuse to be questioned by a black lawyer). The film is quite daring in showing the warts and all of the younger Mandela – his affairs, his ill-treatment of his first wife, his flirtations with violence – and there are flashes later on in the increasingly troubled relationship with his second wife, Winnie. But it soon loses these humanising touches under the pressure of ticking off events.

Justin Chadwick’s direction is largely flat – hamstrung as well by the film being cut so tightly to the bone. He fails to add any real epic sweep to the story, and largely struggles to convey the huge social and political issues that were tearing South Africa apart. As such, he’s often forced into holding a largely static camera in place to capture the four or five speeches that form each scene.

The  main bright spark in the film is the two lead performances. Idris Elba captures Mandela’s mannerisms and voice perfectly, but also brings a real humanity and empathy to the role – he largely manages to defy the film’s attempt to turn Mandela into a lofty marble carving of a man, not letting the human realism of his story escape. It’s a performance that feels very real and human – which is a far harder achievement than it sounds. Naomie Harris is all fiery radicalism and growing fury as Winnie (even more striking since she starts so young and naïve). One of the film’s real disappointments is that it rushes so fast through events that we never get a real, clear picture of the turbulent ups and downs of their marriage (the film is reduced to throwing some Mandela dialogue on his feelings into voiceover).

When the film finally ends it feels more like a sprinter with a stitch, too worn out to run any further through more years, than because it feels like it has made a point. It really wants to be Gandhi – but that film, for all its faults, was patient, well paced, more focused and (crucially) an hour-plus longer. Mandela: Long Walk to Freedom compounds its feeling of being old-fashioned with being rushed and confused. For all Idris Elba’s admirable efforts, Mandela deserved better.
Email ThisBlogThis!Share to TwitterShare to FacebookShare to Pinterest
Labels: Biography, Historical epics, Idris Elba, Justin Chadwick, Naomie Harris, Political dramas, Social issues