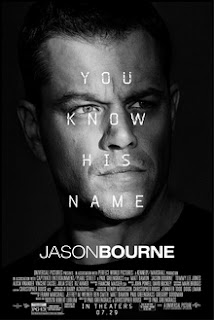 They say you should never go back. Producers had been begging Paul Greengrass and Matt Damon to get back together again and make another Bourne film. After all, there was hardly anyone asking for a sequel to that Jeremy Renner one was there? But Jason Bourne seems like a film that’s been made after Greengrass and Damon ran out of reasons for saying no. I can’t decide if we can blame them for that or not. But their making the film at all suggests they aren’t really losing any sleep about whether people feel this half-hearted effort has an impact on the legacy of the others.

Anyway it’s ten years later. The world is an increasingly technical place, with people living in an era of increasing social unrest and anti-government fury. Jason Bourne (Matt Damon), recovered from his amnesia, now lives off-the-grid – until of course he’s unearthed by his old colleague Nicky Parsons (Julia Stiles). Parsons is now working with a hacker commune in Iceland, and has unearthed more evidence about the shady CIA programme, Treadstone, that Bourne used to be a part of, and about Bourne’s own recruitment into it. Meeting in Athens in the middle of an anti-government riot, Parsons is killed and Bourne is set on a collision course with the CIA as well as finding out more about the mysterious death of his father 20 years before.

Jason Bourne is basically going through the motions. There is an attempt to add another layer of mystery around Bourne’s background, but it barely seems to add much to the hinterland of Bourne we’ve already learned about in the last couple of films. Furthermore, I’m uncomfortable with a Bourne here who goes increasingly on a rampage of revenge. Part of the charm – or rather what makes Bourne different – in the previous films was that he was a man who lived in a world of violence, but didn’t care for it himself. He used brutal force only when it was absolutely necessary, and several times chose not to take a personal revenge. Here however, he dispatches at least three people, which doesn’t seem to square with the character as we’ve previously seen him.

Furthermore, the film seems to be struggling to reclaim Bourne as one of the formal good guys, a patriot and American hero. Again part of what made him different in the original trilogy was that he stood outside the government and nations, that (as Greengrass once said) “he’s on our side”. Here he’s clearly less than sympathetic to anti-government forces, and strongly opposed to exposing CIA secrets. In fact he ends up feeling rather conservative here to be honest, and more like the faceless killer that he started as rather than a renegade.

It’s not helped by the fact that the plot is pretty meh, a remix of different elements from previous films, carefully ticked off to make sure we get everything we could expect. So we get a reworking of various car chases, fights, tense meetings in public locations etc. etc. The film-making is very well done – Greengrass rewrote the book on how to make films like this, and he carries that on here, brilliantly mixing twitchy editing, handheld camera work, immersive film-making and gloomy silences to create a really wonderfully done viewing experience. It’s just more of the same from the originals. The film just ends up living in the shadow of the originals, rather than really forging something out on its own.

Greengrass tries to tap into contemporary ideas. We get the sense of anti-establishment clashes and Internet data scams – but it never really feels like it goes anywhere or coalesces into any real point at the end of it. What is the actual message of this film? There are hints that Tommy Lee Jones’ gravelly CIA Director and Riz Ahmed’s Mark Zuckerberg-lite tech expert are planning some sort of mass intrusion on people’s privacy – but the film never explains this or explores it. It never even makes Bourne aware of it – and since Bourne is our “window” into this world, that means we never understand it either.

I mean, the film is fine other than that, but that’s all it really is. Matt Damon still hasn’t lost it as Bourne – and blimey he should have some inverted award for how little he speaks in this film – and he has not only the physicality but also the worn-down, haunted look of a man who has seen way, way too much. There are professional performances from the rest, but nothing that stretches any of the actors here, with Alicia Vikander particularly under-used as an unreadable CIA agent.

But that sums up the whole film. Despite all the attempts to build in a modern “torn from the headlines” angle to the story, it feels more like Greengrass and Damon are quite happily (and with some enthusiasm at least) going through the motions in order to pick up a cheque. And I guess that’s fine. It just means we are probably not going to rush to see this again.
Email ThisBlogThis!Share to TwitterShare to FacebookShare to Pinterest
Labels: Action Films, Alicia Vikander, Ato Essandoh, Jason Bourne, Julia Stiles, Matt Damon, Paul Greengrass, Riz Ahmed, Spy thrillers, Thriller, Tommy Lee Jones, Vincent Cassel