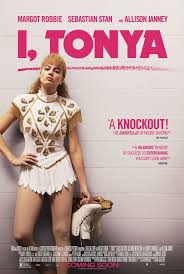 In 1994, Tonya Harding (Margot Robbie) is the bad-girl of ice skating. From a working-class Portland background, with a domineering mother (Allison Janney), she struggles to be accepted in the upper-class world of ice skating. After some success, including becoming the first American ice skater to complete two triple axel jumps, she constantly finds success undermined by her own failings and indiscipline, and the influence of her wastrel, abusive husband Jeff (Sebastian Stan). When competing with rival Nancy Kerrigan for a place on the 1994 Winter Olympic team, Tonya encourages her husband to send Kerrigan threatening letters to put her off. What happens instead is an attack on Kerrigan that breaks her knee – and the fallout will have devastating consequences.

I,Tonya is much more than a film about an attack on a rival skater. Tonya (in the film) complains that the event (which she claims to have had so little to do with) has overshadowed her whole life, but that’s not a mistake the film makes. The film is instead a brilliant deconstruction of class and media in America. Tonya struggles in the world of ice skating because she comes from a working-class, trailer-trash background. This leads her to grow up with several chips on her shoulder, aggressively acting out against judges and fellow competitors, because she wants to belong but never feels she does. In a country that likes to pride itself that it doesn’t have the sort of class system the UK has, it’s a striking commentary on how Tonya completely fails to escape the impact of her poor, violent background – and uses it as a justification and excuse for everything that happens to her in the film.

Her background also makes it every easy for the media to cast Tonya as a villain, first as the difficult punk of ice skating, later as the Machiavellian arch schemer of a vile plot. The worst part of this is – like the reality stars of the 00s who would follow her – Tonya feels she needs to keep playing a role in order to “stay in the public eye”. In turn, the media – largely embodied here by Bobby Cannavale’s delighted media commentator, who gleefully recounts every key moment of the film in a smug series of talking head interviews – keeps the pressure on, puffing her up into whatever it requires her to be to fill a 24 hours news cycle. It’s surely no accident that the film ends with camera moving away from Jeff’s house, while news of OJ Simpson’s arrest plays on the television.

And why does Tonya fit herself into this role? Because, the film suggests, she is a victim who has confusingly absorbed her victim status into her personal relationships and self-value. Treated appallingly be her domineering mother, and hit constantly by her worthless husband, Tonya clearly believes that she is personally of very little worth. If she is so used to being an angry, raging punchbag at home, is it any wonder that she settles into that role publically? To the extent that, throughout, Tonya constantly sidelines or pushes away the more supportive people around her, like Julianne Nicholson’s (who is very good) dedicated coach.

The film handles this range of complex psychological and social themes with aplomb. In a neat touch, the film acknowledges that the events of its narrative are so controversial that everyone in it has a different view. The film is framed through a series of talking head interviews with the leading players (played by the actors) twenty years on. Each of them tells a contradictory version of the story and around the “incident”. The film, bravely, gives some weight to all these viewpoints. It’s brilliantly handled, as we see certain scenes from the perspectives of different characters, which makes them much easier to relate to. Gillespie also has a lot of fun with the film leaning on the fourth wall – frequently characters turn to the camera mid-scene for a few words of commentary, sometimes to stress a point, other times to deny the thing we have just watched ever happened.

The eclectic and dynamic storytelling works an absolute treat, and Gillespie gets the tone absolutely right. While dealing with serious themes, the film is also blissfully funny. Much of the fourth wall humour is brilliant. While taking the characters seriously, the film is also written with a real dark wit. And (once you remind yourself that Kerrigan’s career was not seriously affected by the attack), the build up to the scheme itself, and the feeble cover up, is hilarious. Everyone in the chain of events is stupider than the person above them. Tonya is no genius, her weak husband is a clumsy fool, his friend Shawn an idiotic fantasist, the men hired to attack Kerrigan almost unbelievably stupid. The inevitable crumbling of the plot is hilarious in its disintegration.

It works as well because of the strength of the acting. Margot Robbie is superb as Tonya. She fills her performance with empathy for Tonya, but never lets her off the hook – Tonya never takes responsibility at any point for anything she does. Robbie gets the balance just right between the “little girl looking for love” vulnerability of Tonya, mixed with the bitterness and rage that always lurks just below the surface. She acutely understands the messed up psychology of someone who has been treated badly by everyone around her, and then finds it impossible to form a healthy relationship with the world. 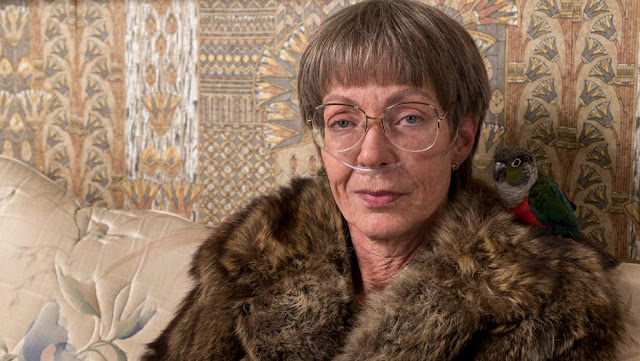 On Oscar-winning form, Allison Janney rips into the sort of part that must have (rightly) looked like a total gift on the page. It’s a scene-stealing role: Harding’s mother is a foul-mouthed bully whose every other line is a zinging put down or resentment-filled burst of cruelty. Janney, however, keeps the part real: there is always a sense that somewhere in there, she genuinely feels she is doing what’s best for her daughter, even if her methods are completely misguided. Sebastian Stan is equally good as Tonya’s weak-willed, not-too-smart husband and Paul Walter Hauser is hilarious (as well as a remarkable physical match) as Shawn.

I, Tonya is a very smart, very funny piece of social satire mixed with tragedy. While being very funny, it’s also sad and rather moving. It has some terrific acting in it and is directed with confident, but not overly flashy, aplomb by Gillespie. As a commentary on the media it’s well judged, and as a look at the impact of class at America it feels fresher than ever.
Email ThisBlogThis!Share to TwitterShare to FacebookShare to Pinterest
Labels: Allison Janney, Biography, Bobby Cannavale, Craig Gillespie, Julianne Nicholson, Margot Robbie, Paul Walter Hauser, Sebastian Stan, Sports films