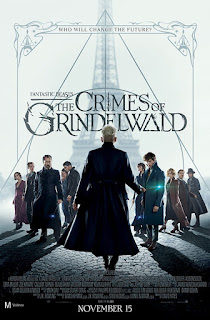 What were the Crimes of Grindelwald? Well the main one is this film. Grindelwald does what we thought might have been impossible – he features prominently in the first flat-out bad Harry Potter film. Fantastic Beasts: The Crimes of Grindelwald is a near incomprehensible mess of clumsy set-up for future plots, tedious side-plots, poorly executed drama and a vast array of not particularly interesting characters struggling through not particularly interesting events with low stakes. I feel asleep twice for a few moments in the film. There is very little in it to recommend.

Dark wizard Grindelwald (Johnny Depp) opens the film by escaping from captivity and flees to Paris. There he plans to – well to be honest I’m not terribly sure what he is planning to do at all. I think it involves something about world domination. Also it involves locating and winning to his side mysterious young wizard Credence (Ezra Miller) from the first film. Meanwhile Grindelwald’s old friend (or was it more? The film ain’t saying) Albus Dumbledore (Jude Law) sends Newt Scamander (Eddie Redmayne) to Paris to find Credence first. Lots of things sort of happen after that, but most of them are building up to the next three (three!) films.

Three films? Seriously? Was that something they had in mind from the start? It feels a lot more likely it’s an idea that came out of the financial success of the first film, rather than any artistic decision. It’s certainly very hard indeed to see many narrative, tonal or thematic links from the first film carrying across to this one. This one feels like it comes from a completely different type of story. More than anything, the film-makers seemed to desperately want to forget the whole “fantastic beasts” angle we started this damn thing with. The odd beast is thrown in every so often to keep ticking the title box, but this flies off (or tries to) into such different, would-be darker, stakes that the beasts never feel a natural link. This is a film that wants – with its muted palette, murders, darkness and (in one supremely misjudged moment) a Holocaust reference – to set us on a dark path to future misery and war. Whatever happened to chasing beasts around to catch them in a suitcase?

Instead the film doubles down on Potter-lore.  You virtually need a PhD in the Potterverse to keep on top of what’s going on. Spells, objects, phrases, charms and incantations are thrown in all over the place, with very little explanation for the audience. Now I can roll with this a certain amount, hell we’ve all read the books and seen the films, but there are at least a few things in here that could desperately do with some reminders for the audience (what is an obscurus again?) so that we can understand their contextual importance. Instead the film barrels along, throwing plot points all over the place and ramming information into our ears. 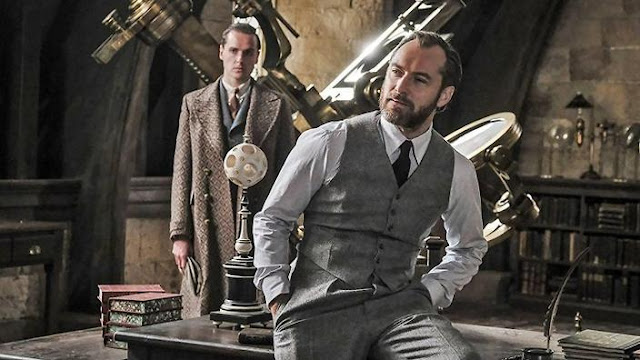 In fact, most of the film is like an epic info-dump of material designed to set up stuff for later films. Again, you can’t help but feel that they suddenly realised after completing the first film that if they were going to spin this out into another multi-volume series, there were lots and lots and lots of plot threads they hadn’t even attempted to introduce at the start. Instead of taking a bit of time to build these things in and make us care about them, this film throws them into the mix as quickly as possible to make up for lost time.

In all this mass pile of information thrown at us, the film could really do with less going on. There is a massive, red-herring- filled plot about a character’s family history that takes up loads of screen time and eventually turns out to mean absolutely nothing at all. This is a misdirection that could work well in a book – but in a film as crammed and packed as this one, it makes you tear your hair out. How long did we spend on this and it means naff all at the end!

In fact, you can’t help but feel that Rowling as tried to write a book here rather than a film. These sprawling bits of wizarding lore, universe building, red herrings and other plots would have worked really well if she had 500 pages of prose to explore and build them in. But she’s not experienced enough a screenwriter to make them work well here. If another scriptwriter had adapted her ideas into something that works as a screenplay – the sort of focused work that changed the sprawling Order of the Phoenix into a tightly focused couple of hours – the film would be far better.

But instead, the film feels like everyone has got far too used to producing these epics, to a certain style of making the films. There is a lack of fresh ideas here, with a lack of independent or new eyes to see the whole and suggest how an outsider could see it. This also extends to David Yates’ direction which, while competent and well managed as ever, now feels like he has run out of ideas of how to film this wizarding stuff in a new way, which is fair enough after five films. It’s a film that desperately needs fresh new blood in it, and a universe that needs the sort of creative kick-up-the-backside that Alfonso Cuaron gave in The Chamber of Secrets.

You feel sorry for some of the actors carried across from the first film. Dan Fogler has so little to do that he would have been better off not being in the film. His absence (for instance, if his memory wipe from the previous film had stuck) would at least have been motivation for the actions of Queenie in this film, who gets a rushed and nonsensical character arc that seems to completely change the character we got to know in the first film. Katherine Waterston is saddled with virtually nothing as Tina.

Instead, far more time is given over to Johnny Depp. Depp’s casting was controversial to say the least – and not worth it. Depp gives one of his truly lazy, eccentric performances – aiming possibly for brooding intensity, he instead lands out dull and underwhelming, a charisma vacuum. It’s hard to see him leading hundreds of followers in a revolution. Jude Law does far better as a twinkly Dumbledore (even if his performance bears little resemblance to Gambon or Harris), and his scenes are the highlights of the film. The film, by the way, shies cowardly away from any real depiction at all at the alleged love affair (which Rowling talks about) between Dumbledore and Grindelwald, presumably because it would make the film a harder sell in China. 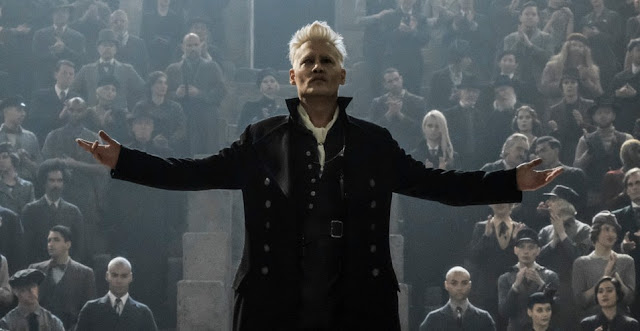 And what of our hero? Well Eddie Redmayne is still charming, but his character feels out of step with the increasingly darker tone the film aims for. He’s also saddled with a supremely dull and unengaging sort of love-triangle with his brother (a forgettable Callum Turner) and ex-girlfriend and brother’s fiancée Leta Lestrange (an out of her depth Zoë Kravitz). The film talks a bit about the troubled relationship of the Scaramander brothers – but is so rushed it never has time to really show us any of this, so instead has to tell us about it, even though everything we see basically shows their relationship as being reserved but loving.

But then that’s just par for the course of this underwhelming and deeply uninvolving film. The stakes should feel really high, but they never do because to be honest you are never really sure what they are. The film ends with the expected fire filled wizarding special effects stuff – but honest to God I had no idea what was going on, why it was happening, what was the danger or where it came from. It just felt like the film needed to end with a bang. There are moments of this film that should have had some emotional force but they don’t because it’s so crammed to the margins with plots, superfluous characters (many of whom are introduced with fanfare and then barely appear in the film) and pointless digressions that when things happen to characters we care about from the first film, it doesn’t carry the force it should. Five films of this? I’m not sure on the basis of this I’d want to see another five minutes. A major, major, major misfire.
Email ThisBlogThis!Share to TwitterShare to FacebookShare to Pinterest
Labels: Alison Sudol, Callum Turner, Carmen Ejogo, Dan Fogler, David Yates, Eddie Redmayne, Ezra Miller, Harry Potter, Johnny Depp, Jude Law, Katherine Waterston, Zoë Kravitz