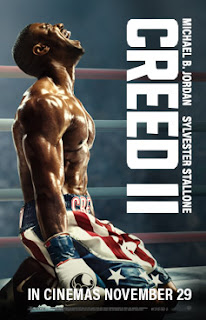 After eight films, in a franchise that has been running for over 40 years, you have to ask if there are any original stories left to tell in the Rocky universe. The answer? Yes there probably are. Does this film tell one? Well no not really, even if there are moments where you feel it wants to. Instead it basically gives us the formula we expected going into it.

Adonis Creed (Michael B Jordan) is finally heavyweight champion of the world – but why is he so glum? Maybe because he still can’t seem to shake off the shadow of his deceased father Apollo Creed. So he finds it hard to resist when Ivan Drago (Dolph Lundgren), the man who killed Apollo, emerges from disgrace in the Ukraine (I’m not sure the makers of this film realise that the Ukraine is different country to Russia). Drago brings with him his super-fighter son Viktor (Florian Munteanu, virtually mute for the whole film) who challenges Adonis to a title fight. Rocky (Sylvester Stallone) doesn’t approve and wants nothing to do with it. Adonis’ pregnant wife Bianca (Tessa Thompson) isn’t sure it’s a good idea. But Adonis gives it a go – and is left hospitalised after a mauling, though Viktor is disqualified in the fight on a technicality. Adonis has to rebuild his confidence from nothing, lay to rest his daddy issues and, of course, take on Viktor in a rematch – stop me if you have heard any of this before.

Because you almost certainly have. This is a film that repackages themes from Creed, the basic plot structure of Rocky IV ,and mixes in elements from several other films to come up with a sort of Frankenstein’s monster that feels familiar rather than fresh. Practically every beat can be predicted in advance, and there are no surprises or challenges to your expectations. Essentially everything plays out so closely to what you might expect, and is so clearly signposted in the film, that it’s almost impossible to spoil.

Which is a shame as there is a better, more intelligent film in here which is thrashing around trying to get out. There was a film to be made here about the shadows fathers cast over us. After all, Adonis and Viktor are basically fighting the battles of their fathers and adopted fathers rather than their own. For Adonis in particular, his struggles to live in the shadow of his father is hammered home with decreasing subtly as the film goes on. Director Steven Caple Jnr was clearly so pleased with his framing of a shot where Adonis trains while a window with a picture of his father towers above him that he repeated it several times in the film. It’s as far as the film goes to questioning the wisdom of these people being weighed down by legacies.

Because this is a film that is trying to have its cake and eat it. All of the characters close to Adonis oppose his first fight with Viktor – Rocky even tells him it’s not his fight – but come the second fight all these characters are cheering him on in the rematch. It seems the only way to escape your father’s shadow… is to climb deeper under it. (Interesting note: all references to Creed being the son of a girlfriend of Creed’s rather than with his wife are deleted in the film, which feels odd.) 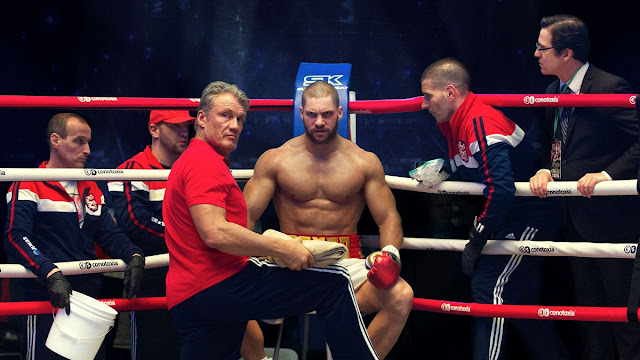 You know what would have been interesting? Perhaps Adonis thinking he doesn’t need to win the fight to match his father’s achievements. Or perhaps Adonis deciding that fighting alone proved his point, and he didn’t need to match Rocky’s success in Rocky IV. Or deciding that he didn’t need to rise to the bait. Instead the film shows him pushing against his father’s legacy – and finally doubling down on it in order to create his own legacy. Thinking about it doesn’t make a load of sense.

It would also have been nice if the intervening years had changed Ivan Drago in some way – but he’s established very early on as a villain, and that’s it. Of course this is partly due to Lundgren’s limitations as an actor – wisely it’s nearly half an hour before Ivan speaks, and he does only one scene in English – but it would have been nice if Drago perhaps expressed some regret to suggest he has changed in some way since 1986. Viktor has an equally unclear trajectory – Ivan’s determination to reclaim glory via his son seems to be leading towards some bust up between them, but it never does (is it just me or does Viktor seem like he almost hates his domineering father?). The film tries to pay this off with a moment of familial affection between the two but it comes from nowhere and seems unclear.

So the story is predictable. So predictable by the way, that the film seriously sags in the middle as we wait (with no tension) for Adonis to decide he will get into the ring again and fight Viktor. It also has a slightly manipulative relationship between Bianca and Adonis (Tessa Thompson is wasted again in a bit of a nothing role – and her musician character is saddled with some of the worst music you’ll ever hear). But it’s still a well made film. The fight scenes in the ring are of course excellent as always. The main actors are all good – Jordan is very convincing and Stallone continues to get a load of pathos from the ageing Rocky.

But it’s just a little bit dull and familiar. There is too much of the same old same old here. Where are the new ideas? Even all these father themes were explored to a conclusion in Creed – why retread it all again? What does this do that is new and different – nothing really. It’s another chapter in their lives. But nothing else. And with the birth of Adonis’ daughter we’ve got to get ready for a whole new series of films in 30 years, as Amora Creed takes on Clubber Lang’s grandson’s nephew in Kid Creed. Or something like that.
Email ThisBlogThis!Share to TwitterShare to FacebookShare to Pinterest
Labels: Boxing films, Dolph Lundgren, Michael B Jordan, Phylicia Rashad, Rocky series, Steven Caple Jnr, Sylvester Stallone, Tessa Thompson