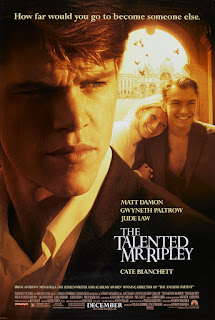 Patricia Highsmith’s Tom Ripley – sociopath, confidence trickster, human blank piece of paper and murderer – is so unknowable he’s been played on screen by actors as wildly diverse as Alain Delon, Dennis Hopper, John Malkovich, Barry Pepper and, perhaps most famously today, by Matt Damon. Ripley’s complexity – Highsmith described him as “suave, agreeable and utterly amoral” – and his general blankness and ability to adapt to different situations make him a challenging character to bring to the screen. Minghella’s film goes for a dark, Hitchcockian feeling drama that gives a lot of focus to feelings of sexual confusion and inadequacy in Ripley that motivate his actions and increasingly spiral out of control, leaving him isolated and damaged.

Tom Ripley (Matt Damon) allows himself to be mistaken by the owner of a shipping line, Herbert Greenleaf (James Rebhorn), as an old Harvard classmate of his son Dickie (Jude Law). Inveigling his way into Herbert’s trust, he is sent to Italy to persuade Dickie to return to America and take up a job in his father’s company. Happily taking the all-expenses-paid trip, Ripley finds himself besotted with the glamour and easy charm of Dickie, a handsome playboy, and soon positions himself as travelling companion to Dickie and his fiancée Marge Sherwood (Gwyneth Paltrow). But Dickie’s attention is only fleeting, and soon Ripley feels betrayed as Dickie starts to refocus elsewhere – leading eventually to Ripley murdering Dickie in a fit of jealous pique and using his faint resemblance to Dickie’s passport photo to assume his identity and live off his allowance – all the while dodging meeting Marge, friends of Dickie and the police (who are searching for the disappeared Tom Ripley).

Minghella’s film is a complex, psycho-sexual thriller, shot with a sun-kissed warmth that accentuates the glamour and style of the Italian Riviera, while subtly keeping us distant from the characters and their increasingly complex motives. The richness and lushness of these expensive lives look as appealing and seductive to us as Ripley finds them when he arrives. However, its dark undertone is never lost, and the film is edited and assembled with a certain chill and coolness while Gabriel Yared’s score mixes some fun jazz remixes with more a ominous tone as the bodies start to pile up.

I love a lot of Minghella’s work. He’s an intelligent and literate director, and the script he prepared for this film shows that he’s a master of taking complex, multi-layered pieces of fiction and turning them into something impressive and cinematic. But watching The Talented Mr Ripley, with its effective mix of period charm and sixties swing, its clever apeing of sixties filming styles, its riffing on Hitchcockian tropes and its picture book locations around Italy, part of me wonders if this film started pushing him too far down the path of being a “literary” director. His film is intelligent, and alternates between being chilling and fun, but at times it’s also wearing its “important film-making” badge a little heavily. It’s like the film is straining a little too much for prestige, as if the luscious design, complex plotting, sharp dialogue and clever visuals are aiming a little too much for matching The English Patient’s Oscar hoovering.

Maybe that’s why, despite everything that is good here, this film doesn’t have quite the same success as that film. This is, I’ll confess, an odd thing to say in a film that is generally very positive – if a little too long – but there it is. Sometimes these things are intangible in a way. Part of the film’s problem is that very complexity of plotting and motivation that he (arguably) builds on from the book. One of the film’s biggest question marks hangs over Ripley himself.

Imagined here as a slightly diffident, awkward, closeted graduate, he never really convinces as the kind of ruthless opportunist the plot demands him to be. Much as the film – and Damon’s performance – nails the sociopathic blankness of Ripley, his ability to switch smoothly from persona to persona, at the same time Ripley either seems to care too much or too little. Damon never quite convinces as a man so in love with the highlife that he is happy living off the allowance of (and pretending to be) the adored friend he bludgeons to death in a boat.

This is where the homosexual undertone of the original has been converted into a overtone – and the film’s overplaying of Ripley’s physical, puppy-dog attraction to Dickie make him feel more dependent. The film works really hard to make him as sympathetic and vulnerable as possible, to make him a victim of his own warped circumstances and morality, and it never quite manages to make this make sense, or to carry real consistency. For all you feel Minghella wants us to think we are drilling into what makes a killer, the more we learn about Ripley the less substantial as a character he feels. 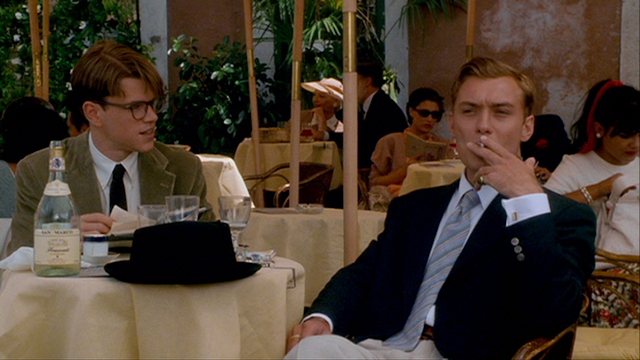 Damon, despite this, gives a good and generous performance. Generous because, playing quite a pathetic, indescribably blank man, he really manages to fade into the background of scenes. It does mean that he cedes most of the best work to his co-stars. Jude Law is radiantly cool, fiery, passionate, selfish and hugely attractive in a star-making turn as Dickie. Philip Seymour Hoffman is the epitome of a Bullingdon club bully turned young adult as Dickie’s school friend, seizing scenes with a louche aggressiveness. Cate Blanchett is equally brilliant as a warm, friendly socialite who inadvertently stirs terrible ideas in Ripley.

These actors are all highlights in a superbly mounted production, but one which doesn’t reveal or tell us as much as we might expect. Instead, Minghella gets slightly lost in his own intelligence when adapting the book, pushing the story into deeper, psycho-sexual motivations for its character that end up obscuring and fudging the actions he carries out in the film. It’s a gorgeous looking film, packed with wonderful scenes, but Damon’s Ripley seems too sensitive, too prone to the edge of tears, impossible to see as a man who could become a serial murderer. By giving a greater hinterland to Ripley, Minghella also changes the character fundamentally. It makes for an interesting development – but Ripley’s desperation, his essential weakness, his lack of control make him feel inconsistent with the setting and plot he is in.
Email ThisBlogThis!Share to TwitterShare to FacebookShare to Pinterest
Labels: 1999, Anthony Minghella, Cate Blanchett, Gwyneth Paltrow, Jack Davenport, James Rebhorn, Jude Law, Literary adaptations, Matt Damon, Murder mystery, Philip Baker Hall, Philip Seymour Hoffman, Thriller