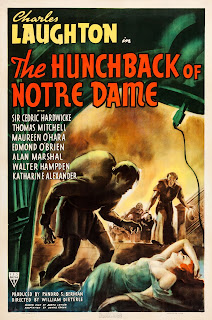 Victor Hugo’s gothic romance–slash-tragedy has been turned into a film so often, it’s a wonder anything that happens in it remains a surprise. But this 1939 version is perhaps the most influential, where Hollywood decided to throw money at the fable and try and make something as close as possible to the spirit of the book. But of course with a happyish ending on the end – because, you know, it’s still Hollywood!

In 1470s Paris, the city is caught between the pressures of religion and new developments such as the printing press. In the centre of the city is the Cathedral of Notre Dame – where the bells are operated by foundling Quasimodo (Charles Laughton), a deformed hunchback driven deaf by the constant ringing of the bells. His benefactor, Judge Jean Frollo (Cedric Hardwicke), is running a vicious campaign to cleanse the city of the gypsies and beggars that make up a large part of its underbelly – but he’s hit for six when he falls in love (or rather lust) with beautiful gypsy woman Esmeralda (Maureen O’Hara). But he’s not alone – equally smitten are naïve young poet Gringoire (Edmond O’Brien), arrogant Captain Phoebus (Alan Marshal), and Quasimodo himself. When Esmeralda rejects Frollo’s advances she soon finds herself in danger – and her only hope of safety comes from unexpected sources.

Dieterle’s background in German expressionism and silent cinema shines through in this visually striking and opulent studio production, with its superbly marshalled crowd scenes, brilliant use of near-impressionistic shadows and fabulous camera work that drifts over the impressive (and hugely expensive) set. Dieterle mixes this technical expertise with a real sense of emotion and character development, helped by some terrific performances from the cast. It’s a film that motors through the story of the novel, but skilfully repackages it as both a fascinating semi-romance and a sort of urban tragedy, as well as a subtle mediation on love and lust.

At the centre of it, you have Charles Laughton giving probably the definitive performance of the hunchback. Sweating under layers of make-up and an artificial hump, Laughton is nearly unrecognisable as the bell-ringer. His triumph is to make a gentle, tragic character emerge from make-up that suggests more Frankenstein’s monster than tragic hero. Nearly wordless for the first hour and a half of the film, Laughton does his magic with an expressiveness that speaks volumes of the loneliness in Quasimodo. Tenderly, he watches people knowing he can never be part of their lives – and look how excitedly he bursts out when he finally gets a chance to speak to Esmeralda one-on-one. Suffering punishment on the wheel, Laughton’s eyes convey the numb acceptance of pain as his natural state of affairs. But he also manages to bring out the gentle, childlike qualities of Quasimodo. It’s a wonderful, wordless, expressionistic performance – a triumph of physical acting and wonderfully judged emotional vulnerability. 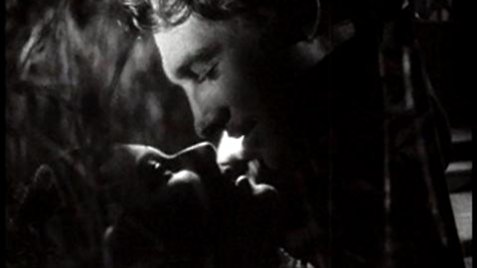 The rest of the cast match Laughton stride-for-stride. Censor demands at the time required that Frollo be removed from his position (in the novel) as Archbishop, so the book-version of the character is split in two here. Archbishop Frollo is the sort of pious bore who can keep the Hayes committee happy. But Cedric Hardwicke gets to play the invented evil brother Judge Jean Frollo, the lecherous hypocrite from the novel. An authoritarian ascetic, Hardwicke’s Judge Frollo is lean, mean and utterly ruthless – and totally in denial about both his lustful feelings and hypocrisy. Hardwicke is virtually an archetype of the sinister authoritarian, but he manages to never chew the scenery. Incidentally, knowing the two characters are basically split from the original book, does allow moments of fun imaging the moral debates between the two as a sort of split personality discussion.

But there are plenty of other good performances as well – not least from Maureen O’Hara, who is charming and engaging enough to make you believe that the whole male cast is in love with her. Edmond O’Brian goes large at times with the passionate romance, but he does a very good job in the role. Thomas Mitchell is good value as the leader of the beggars, Clopin. There are strong performances across the whole film.

All these performances are framed within a fabulous design. The trouble and expense that has gone into the construction of the set is inspiring, the sweeping gothic arches and towers giving every shot something exquisite to look at. It also gives never-ending options for camera placement and impressionistic imagery for Dieterle. It works as well – the gloomy, imposing towers of Notre Dame are captured with real artistry, while the shadow it casts over the whole city of Paris serves as a constant reminder of the oppression the city lives in.

Dieterle also brilliantly films the crowd scenes, getting a superb sense of visceral emersion from these sequences. Whether the camera is in the mix, or flying above the crowds from the tops of Notre Dame, these scenes look equally fantastic. Dieterle handles the more action-related scenes with particular skill – Quasimodo’s rescue of Esmeralda from a death sentence is particularly well staged in its dynamism and graceful filming. 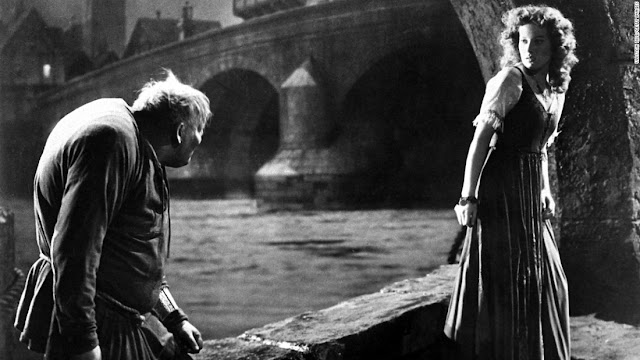 Not every beat works. The portrayal of Louis IX as a sort of kindly old uncle seems off-piste from the very start. The early sequences sometimes get bogged down too quickly in set-up rather than getting into the action. Alan Marshal is rather wooden as Captain Phoebus, although the film goes surprisingly far in suggesting the dark desires and predatory sense of danger that comes from the character. Some of the beggar court sequences get similarly stuck in kitsch.

But these are minor beats. It’s a film that really understands emotions and makes the dramatic thrust work. It also has a dark sexual power, not least in Hardwicke’s Frollo: a seething mess of frustrated desires. It never loses sight of the sadness at the heart of its central character’s story, of his loneliness and isolation, and manages to communicate this brilliantly in every scene where the character appears – he is trapped by his muteness, his ugliness or his sadness at every turn. It’s a development that never fails to be engrossing and finally moving. It’s a film that is brilliantly assembled with real technical skill, very well acted and wonderfully directed.
Email ThisBlogThis!Share to TwitterShare to FacebookShare to Pinterest
Labels: 1939, Alan Marshal, Cedric Hardwicke, Charles Laughton, Edmond O'Brien, George Zucco, Harry Davenport, Literary adaptations, Maureen O'Hara, Thomas Mitchell, Walter Hampden, William Dieterle