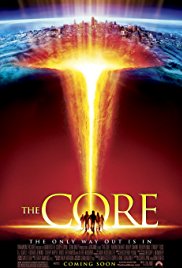 Dr Josh Keyes: “Even if we came up with a brilliant plan to fix the core of the Earth, we just can’t get there”
Dr Conrad Zimsky: “Yes, but – what if we could”

If you have any doubts about the type of film you are going to watch, then that tongue-in-cheek dialogue exchange (and the words can’t capture the playful, I-know-this-is-crap wink that Stanley Tucci tips practically to the camera) should tell you. The core of the Earth has stopped rotating. Which basically means all life on Earth is going to end in the next few months. Unless, of course, we can restart the rotation of the Earth’s core. So time to load up a team of crack scientists into a ship-cum-drill, made of metal that doesn’t buckle under pressure (this metal is, by the way, literally called unobtainium by the characters) so that they can sprinkle nuclear bombs through the centre of the Earth to kickstart the rotation of the planet and blah, blah, blah.

It’s perhaps no surprise that The Core was voted the least scientifically accurate film ever made by a poll of scientists about 10 years ago. Nothing in it makes any real sense whatsoever, and it’s all totally reliant on the sort of handwave mumbo-jumbo where you can tell getting an actual logical explanation was going to be far too much hard work, so better to roll with a bit of technobabble and prayer. Questions of mass, physics, pressure are all shoved aside. The film sort of gets away with it, with a leaning on the fourth-wall cheekiness – no fewer than three times in the film the impossible happens with a “what if we could” breeziness, as a character pulls out a theory or discovery with all the real-world authority of the fag-packet calculation.

But then scientific accuracy is hardly why we watch the movies is it? And this is just a big, dumb B-movie piece of disaster nonsense, which throws in enough death-defying thrills, predictable sacrifices and major landmarks being wiped out topside to keep the viewer entertained. In this film Rome and the Golden Gate Bridge both get taken out by spectacular disasters. Beneath the surface, the characters go through the expected personality clashes and learn the expected lessons.

The script (most of which is bumpkous rubbish) really signposts most of this personal development. Will Zimsky and Brazz rekindle their respect and overcome decades of rivalry? Will Serge, on the mission to save his wife and kids “because it’s too much to think about saving the whole world”, have to pay the ultimate sacrifice? Will Major Childs finally get the courage and determination to take command and make the hard calls? I won’t tease the fate of Mission Commander Bruce Greenwood, but he is called upon so often to reassure Childs that one day she will be ready to take command, alongside other mentoring advice, that the only surprise is that he lasts as long as he does.

So why is hard to not lay into The Core? Because, not that deep down at its core, it knows it’s a silly film. The script has enough awareness of its cliché and scientific silliness that it almost doubles down on it. And the actors play it just about right: for large chunks of it they perfectly hit the beats of sly archness that suggest just enough respect to not take the piss, but enough self-awareness of what they are making. But these are all very, very good actors and when the serious moments come, it’s remarkable how much they can shift gear – with the grisly death of one character (while the others powerlessly try and save him) played with an almost Shakespearean level of tragedy by a distraught Eckhart and Lindo. Later, as three characters juggle over who will go on a suicide mission to keep the mission on track, the bubbling emotions of shame, relief, pride, respect and buried affections are genuinely rather affecting. Its moments like this that makes me kind of love this big, dumb, stupid film.

But it remains stupid. Topside, Alfre Woodard and Richard Jenkins bumble through roles they could play standing on their heads. A hacker – Rat – is as clichéd and full of techno-nonsense as any of the science, which is even more painfully obvious to us now that we’re all so much more tech-savvy than we were in 2003. Events happen because, you know, they can. Discoveries and scientific conclusions are made because the script needs them. But the film knows this, it doubles down on it and it accepts that every problem is just a “But what if we could!” away from being solved. Stupid, but strangely loveable.
Email ThisBlogThis!Share to TwitterShare to FacebookShare to Pinterest
Labels: 2003, Aaron Eckhart, Alfre Woodard, Bruce Greenwood, Delroy Lindo, Disaster Films, DJ Qualls, Hilary Swank, Jon Amiel, Richard Jenkins, Stanley Tucci, Tchéky Karyo, Terrible Films