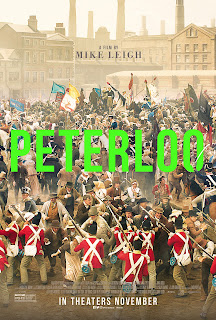 Perhaps one of the most pivotal moments in the struggle of the working classes to gain political and social rights was the Peterloo massacre of 16th August 1819, at St Peter’s Field in Manchester. At a meeting of over 60,000 people, officials ordered first the mounted yeomanry and then soldiers to attack and break up the crowd. At least 15 people were killed and hundreds more wounded, either from the indiscriminate sabre blows from the yeomen (probably drunk) and soldiers (unable to control the panic), or crushed in the frantic attempt to escape from the confined square. The immediate reaction from the authorities was praise at breaking up this “Bonapartist” piece of revolutionary nonsense. The lasting effect was condemnation of the brutality shown towards a peaceful demonstration and the massacre becoming a major cause celebre. It was ultimately influential in the passing of the Great Reform Act, which greatly extended the franchise and rebalanced much of Parliament (at this point so unbalanced by age old tradition that while some tiny hamlets returned MPs, the whole of Manchester had no representation).

It’s still an emotive subject for many today, and with this reverent film, overflowing with anger at the hypocrisy and injustice of the ruling classes, you can’t doubt that Mike Leigh and the makers of Peterloo are among them. But however sincere their personal passion about the subject is, what they fail to bring to the film is any real dramatic impetus to make us care. Instead this is an inert, over-long, often (if I am being completely honest) tedious film that takes nearly an hour to get going and then only offers flashes of dramatic interest before culminating in the massacre itself (very well shot and staged, but still itself a rather distant viewing experience).

A large reason for this is the film is so reverential towards the campaigners for liberty, that the overwhelming majority of their scenes are given over to very good actors giving spirited renditions of actual speeches and pamphlets at a series of political meetings, shot with a reverent simplicity by Leigh. Much as it is can be interesting to hear quotes from things like this, by the time we are onto our twelfth political speech covering similar ground, delivered with another bout of fiery passion, you’ve started to glaze over. What we don’t get from many of these campaigners is any reason to really care about them – either as people or as part of a movement. Instead the film ends up like a cinematic Rushmore, carving their representations into celluloid for us to gaze up at in awe.

A similar fate befalls the working-class characters in the film, who are lacking any real character or story at all and whose main function seems to be to exist so we can experience both their misery and their awakening political awareness. Our main family is a group of mill workers, with Maxine Peake (does anyone do “hard-pressed working class stoicism hiding pain” better than Peake?) as the matriarch, welcoming her son home from Waterloo. These people talk at each other, quoting various current issues and bemoaning the hardness of living at a time of near universal poverty – but other than the fact that they are poor and suffering we are given very little reason to care for them. Like the rest of the working-class characters, they seem more like passengers in the film, meaning when the swords start flying, it’s actually very hard to get worked up as much as we should as members of this family are hacked down. 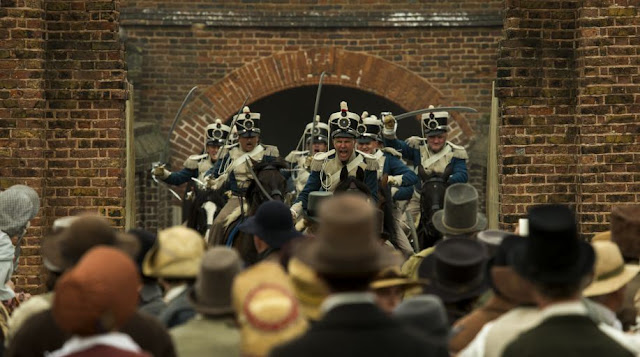 The one exception in the entire campaign-side of the narrative comes with the introduction of “Orator” Henry Hunt, a prosperous middle-class man who became a famed agitator for working men’s rights. Wonderfully played, with a an air of arrogant grandiosity mixed with genuine commitment to the cause, by Rory Kinnear, Hunt shakes up the pattern the film settles into over its first hour. Acutely aware of his position as the nominal head of a national movement, Hunt has little patience (and even a touch of class-based distance) from the mostly lower middle-class campaigners he mixes with in Manchester (while never being anything less than scrupulously polite), and his fish-out-of-water awkwardness around them raises several laughs (the only ones of the film). Scenes in which he imposes his own conditions on the internal politics of the Peterloo meeting (who will speak, who will be on the podium, will there be weapons in the ground) not only feel more real than anything else we’ve seen in the film, but they are also far more entertaining and engaging than anything else connected to the massacre’s build-up.

Leigh was perhaps so hidebound by wanting to honour the men who campaigned for liberty that, other than with the larger-than-life Hunt, he seems too restricted dramatically – as if adding too much of that essential for drama, conflict, would somehow undermine them. Ironically he has far greater freedom with the authorities – and the film’s more engaging sequences (outside of those with Hunt) are all based around the arguments, clashes, plots and fury of the various levels of authority in the country, from the corpulent Prince Regent through the Home Office to the local magistrates.

The film gets more juice from its righteous anger at the unfairness, arrogance and hypocrisy of these men than it does from almost everything else. It also gives the actors playing these roles far more to work with. Karl Johnson stands out as a stammering but adamantine Home Secretary Lord Sidmouth, paternalistic but totally unwilling to budge an inch. The real stars, however, are the magistrates we follow in Manchester, each introduced trying a trivial case (drinking an employer’s wine, an argument over a watch, stealing a coat) with ludicrous hard-line punishments (flogging and imprisonment, transportation and execution respectively). Played with a lustful relish by Philip Whitchurch, Jeff Rawle, Martin Savage and most expressively of all Vincent Franklin (who nearly goes too far with the lip smacking, until a scene later we see even the Home Office officials eagerly reading his latest dynamite dispatch with a barely suppressed chuckles at his OTT rhetoric), these characters argue the fine points of law and lustily denounce the working classes with such fire and energy that you conversely get more wrapped up in their scenes than almost anything else in the film. Maybe Leigh felt he had greater freedom to create characters and drama here, but it does feel unbalanced. 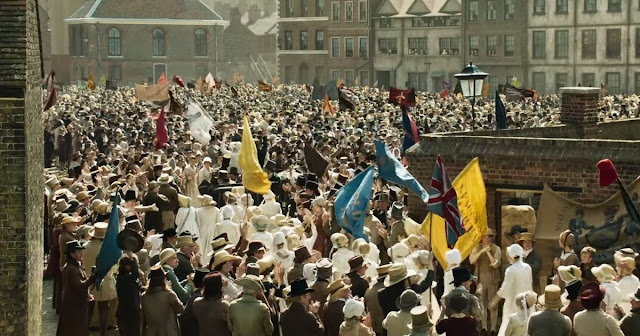 All that said, the massacre itself when we reach it is brilliantly staged, immediate, deadly, meticulously reconstructed and filmed with a documentary anger at its brutality. You can sense the creeping tension throughout the film and the explosion of violence afterwards, for all the problems of the film, is genuinely horrifying. In fact it wraps you up so much, I wish the film had dealt more with the aftermath of the clash (there is a very good scene as stunned journalists walk St Peter’s Field with horrified fury) and the impact it had, rather than the film wrapping up swiftly with funeral of one of its working-class characters (it’s not a surprise which one).

But then that’s part of the whole film’s problem. It feels like a missed opportunity. It’s a stately civics lesson, a film that hammers home the importance of what it is presenting to you, but never really gives you a reason to invest in the real stories and passions behind the history. Instead it presents everything as important, because it is, rather than making it important to us. It feels at the same time a film that is preaching to the choir who already know this history back-to-front, and also a dry history lesson introducing it to a new audience. Either way it fails. Despite one or two good scenes, a dull, underwhelming, preachy disappointment.
Email ThisBlogThis!Share to TwitterShare to FacebookShare to Pinterest
Labels: 2018, British Films, Historical epics, Maxine Peake, Mike Leigh, Political dramas, Rory Kinnear, Tim McInnerny