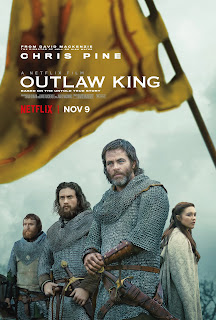 In 1995 the world went crazy for Mel Gibson’s Braveheart, which turned William Wallace from a largely forgotten historical rebel into a martyr for independence. Outlaw King is an almost spiritual sequel that follows the life of Robert the Bruce, the eventual winner of Scottish independence. It picks up almost immediately from the death of Wallace and follows the struggle of the Bruce to take the throne. But I’d be surprised if it has the same impact.

Outlaw King is a fairly decent pick-up of events, and it tries to get a balance between drama and history – one it more or less manages until the final act. In the aftermath of a failed Scottish rebellion, Robert the Bruce has the advantage of his father (James Cosmo) being an old friend of Edward I (Stephen Dillane). After renewing his oath of loyalty to Edward, Robert is given land, influence and a marriage to wealthy noblewoman Elizabeth de Burgh (Florence Pugh). However, after his father dies regretting the pact and William Wallace is brutally executed by the English, Robert uses the public outrage as a boost to putting together his own claim to the Scottish throne. Murdering his chief rival in a church, he raises the flag of rebellion against the English and leads an army to take back Scotland. But things swiftly go wrong, and Bruce finds himself on the run and declared a rebel.

Outlaw King gets a lot right. It’s impressively filmed and looks fantastic. The photography by Barry Ackroyd is wonderful, in particular the use of candles for interior scenes which bring a brilliant golden glow to the action. Mackenzie is an ambitious and imaginative director, and he pushes himself to the limit here. The opening nine minutes of the film is one long continuous shot that takes in debate, a sword fight, court room intrigue and the firing of the largest trebuchet you are going to see outside of Warwick Castle. With the camera swaying and bobbing around in this sequence you have to admire the chutzpah – even if I can see that some viewers (my wife included!) might think it showing off.

Mackenzie gets equal flourish out of the film’s many combat scenes. There is, to tell the truth, probably one too many of these bloody melees, but the camera gets a real sense of the blood, mud and gore that medieval battle involved. With brilliant use of hand-held immersive camerawork, each of these battles really gives you a sense of bloo-spattered chaos. Sometimes things are hard to follow – at least one death in combat is met with fury, but I’m not entirely sure who that guy even was (and it’s never mentioned again). But you’ve got to admire the skill of the film-making.

It’s the story itself where the film sometimes falls a bit flat. It does get a really good sense of the medieval, I will certainly give it that. The design and attitudes of the film are pretty perfect, and the stakes that everyone is clashing for feel very real. But the film encounters problems more and more as the film drifts into fiction and away from history. While the realpolitik of Bruce’s move to have himself declared king has a ruthlessness that feels real, the film’s attempt to build a personal rivalry between Bruce and the future Edward II feels forced from the start. By the time the film’s conclusion attempts to boil the entire campaign for Scottish independence into a mano-a-mano clash between the two on the battlefield (that of course never actually happened) you start to feel it’s getting very silly. Not least as figures who in real life would be invaluable bargaining chips are allowed to walk free from the battle field, to demonstrate the moral superiority of our heroes.

It’s a part of the general drift of the storyline that gets a little less compelling the longer it goes on. Maybe this is because once Bruce has his initial army destroyed and his first campaign to grasp power defeated, the story of him being on the run and carrying out guerrilla hits never feels fresh and original. We’ve seen it before – and the way the film generally avoids developing the supporting characters fully often means your focus starts to shift. After a really strong start, the film becomes more and more generic, Bruce himself becomes more and more a perfect leader rather than the almost Machiavellian character he started as, and the focus turns more and more into making it a conventional goodie-vs-baddie clash. It becomes something more forgettable, more like something you’ve seen before, and turns a campaign that took almost ten years into a rushed “and then they won this battle and everything was fine” ending.

There are many strong moments in there though, not least the generally decent performances from the cast. Chris Pine as Robert the Bruce sounds like the sort of casting decision made in hell, but he actually handles himself very well. His accent is very good, he captures a lot of the complexity of Bruce as a man who wants to be good but must sometimes be ruthless, and he brings a large dollop of charisma to the role so that you never really find yourself questioning whether he is a man others would follow. He doesn’t set the world alight, but does a good job.

The film’s stand-out turn however comes from Florence Pugh, who brings her customary intelligence and charisma to the complex part of the Bruce’s wife. At first positioned into an arranged marriage, she quickly proves both her independence and value, but also her strength of character. Far from being just a hostage – the role history largely assigned her – Pugh’s performance always makes her a character with agency, a woman determined enough to be loyal to the end once she has made her choices. There are other decent performances as well, in particular from Stephen Dillane as an authoritarian hard-ass Edward I, while Billy Howle gets to a play an Edward II who feels true (the film avoids references to his homosexuality, but does allow him to be the fearsome warrior – if hopeless general – he was, as opposed to the homophobic cartoon he was in Braveheart).

Outlaw King, though, just isn’t quite good enough. It’s fine for a decent watch on a Saturday night. In fact Netflix is just about its perfect platform: if you stumbled across this while scrolling through the library, and you were in the mood to click on it, you wouldn’t be disappointed. But even though it’s visually impressive and enjoyable, it’s also increasingly predictable and even a little bit empty. It doesn’t quite come to life as much as it should and eventually settles for being something quite traditional.
Email ThisBlogThis!Share to TwitterShare to FacebookShare to Pinterest
Labels: 2018, Aaron Taylor-Johnson, Billy Howle, Chris Pine, David Mackenzie, Florence Pugh, Historical epics, James Cosmo, Netflix, Sam Spruell, Stephen Dillane, Tony Curran