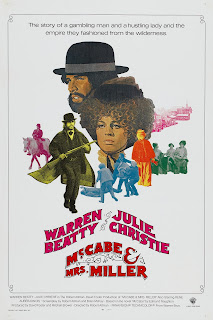 The Western is such a familiar genre of Hollywood film-making that you can be pretty familiar with nearly all the concepts that  it contains – from the stranger in town through to the final shoot-out. All these familiar tropes were just challenges though for a film-maker like Robert Altman: how do we make a Western that features all these, but then completely twists and subverts it all into something that also feels like a product of the 1970s rather than the 1870s? Well Altman runs with all this in McCabe and Mrs Miller, his successful anti-Western.

In Washington State in 1902, John McCabe (Warren Beatty), a conman and card sharp, rides into Presbyterian Church, a town so small it’s named after its only prominent building. McCabe’s skills at cards quickly make him rich, and as the town’s mining fortunes grow so do his. He sets up a gaming and cat house in the town. Constance Miller (Julie Christie) is a cockney opium addict with experience of running whorehouses and she quickly partners with McCabe, promising that she can raise his profits tenfold. All goes swimmingly – until big business heads into town and makes an offer to buy out McCabe’s holdings (and the whole town) for redevelopment. When McCabe says no he quickly finds himself in over his head.

Altman’s film combines all the techniques that he had been experimenting with throughout his career into a perfect storm of Altmanesque technique. He and Vilmos Zsigmond, his skilled cinematographer, deliberately “flashed” the film to slightly over-expose it, giving the picture a slight sepia hue like a series of old photos. The camera leisurely roves around like curious spectator to the film, letting itself catch moments of interest here and there – sometimes refusing to focus on events that feel, by rights, that they should be centre of the film. It gives the film a real lived in feeling, while also making it look slightly like a historical record of true events. Either way, as the cold hits Washington State, it looks beautiful – candle-lit interiors mixed with coldly blue exteriors of snow and ice-covered surroundings.

But those visuals are as nothing compared to Altman’s experiment with sound. Sticking rigidly to the script was hardly ever Altman’s way and it’s certainly not here. In rehearsals, the actors felt free to experiment with and rework a script that had already been through the hands of several writers. Altman kept this loose, free-flowing, improvisational tone in the final film. As the camera roves round, so does the microphone, picking up snatches of conversation here and there – sometimes giving us a mixture of conversations from which we need to pick out what to listen to. In addition to that, most of the actors deliberately mumble their lines – or happily deliver them from mouths clutching cigars or chewing food. Anarchic is almost the right word for it – Altman doesn’t want to tell you what to listen to, and is more interested in getting across the atmosphere of the scene rather than the facts and figures. It takes some time to get used to – and at points is highly frustrating – but it creates its own mood. 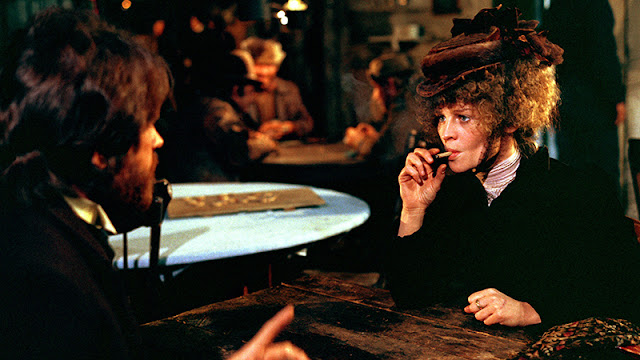 And this mood is very different from what you might expect from a Western. There is a distinct lack of glamour here. This world of Presbyterian Church is dirty, grimy and lacking in any moral fibre or real sense of right and wrong. The church itself is respected but largely ignored by the citizens, who are far more interested in drinking, screwing and gambling. When violence occurs it is ignored as much as possible or – as in the final shoot-out that ends the film – it happens around people so wrapped up in their own concerns (from domestics, to a large fire) that they barely notice it happening. Needless to say, for those in the fire fight, there are no rules to be played by at all. People are shot in the back, shoot down innocent bystanders, and play by no rules whatsoever, stalking and shooting opportunistically.

McCabe is a perfect hero for this very different kind of Western. As played by Beatty, he is a cocksure coward nowhere near as clever, confident or controlled as he thinks he is. Arriving in the town, he seems like the height of glamour in his bearskin coat, and he swiftly masters the simple townsfolk with his tall tales and charisma. However, the more people who intrude on this world, the more quickly it emerges that McCabe has very little clue about what is going on, is easily cowed and has only the barest understanding of how the world works. Meeting with a lawyer, one scene later he is parroting a (completely misunderstood) version of the law that he has heard from there. Meeting with the “muscle” from the corporation, he deflates like a balloon, desperately making offers hand over foot. Beatty is very good as this puffed up coward, confused and constantly living a front but out of his depth in the world.

Julie Christie’s Mrs Miller is far more worldly than him, immediately able to recognise the dangers and understanding exactly the sort of men McCabe is dealing with. Mrs Miller’s opium habit is a quietly understated obsession, one the other characters seem unaware of, but which the viewer alone seems to know about. It raises questions of course – is this meant to imply perhaps some of what we see is a drug induced fantasy? But it doesn’t impact otherwise the relationship she develops with McCabe, part meeting of partners, part a protective relationship with Miller guiding McCabe. 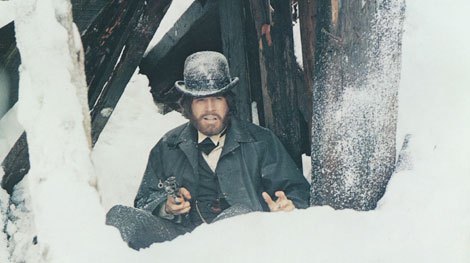 The rest of the cast is stuffed with a series of Altman regulars, all of whom deliver fine performances. The stand-out is Hugh Millais, an English writer making his acting debut, who is simply sublime as the articulate and ruthless chief heavy sent by the company to intimidate McCabe.

For the film itself, your enjoyment of it is largely going to be affected by how easily you plug into its style of storytelling. There is very little story for much of the first half of the film, instead events continue in a loose and undisciplined style, but the second half delivers a more focused story of ambition pushed too far, and culminates in an impressively filmed ruthless shoot out. It is perhaps more of a film that is about the atmosphere and the style than the story, but as a redeveloped Western that carries across the style of the grimy 1970s it works extremely well. At first I thought I would never get into it, but by the end I found myself wrapped up in the story it was telling. Visually and performance-wise it’s superb. Altman is an acquired taste, but acquire it and you will be richly rewarded.

Coda: Much like The Long Goodbye I watched this film about a week ago at time of posting and I find myself thinking over several sequences in it again and again with ever more admiration. When watching it I felt it had been over promoted by critics. Now I increasingly think it might be something very special indeed.
Email ThisBlogThis!Share to TwitterShare to FacebookShare to Pinterest
Labels: 1971, Hugh Millais, John Schuck, Julie Christie, Keith Carradine, Michael Murphy, René Auberjonois, Robert Altman, Shelley Duvall, Warren Beatty, Westerns, William Devane