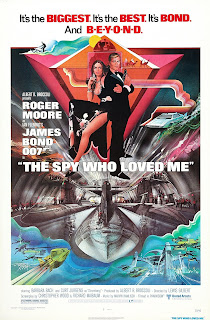 Roger Moore had made two Bond films before he made The Spy Who Loved Me – but this is the one when he finally hit upon the formula that works for him. It’s also probably the moment where the Bond films became – once for all – comedy adventure capers. It was but a few more degrees from here until Bond was telling a tiger to “sit” or racing past a double-taking pigeon in the middle of St Mark’s Square. And the public loved it. For better or worse, Moore’s Bond here helped define the franchise for a whole generation.

Anyway, the story. It’s eerily familiar in many ways to Thunderball and You Only Live Twice: a power-crazed lunatic (Karl Stromberg) running a secret organisation wants to destroy the world. His plan? To capture one American and one Soviet submarine and use them to fire nuclear missiles at the nation’s two capitals, to kickstart a nuclear war, leaving only his underwater kingdom intact. Just as well then that an over-keen Stromberg (Curd Jürgens) first captures a British sub, meaning James Bond (Roger Moore) is called in to investigate. Bond will work with the USSR’s finest agent – Anya Amasova, Triple X (Barbara Bach) – to find out what’s going on and why.

TSWLM is a lot of fun, possibly the ultimate expression of what a lot of people think Bond is. It’s hugely silly, rather exciting and has almost no connection with reality whatsoever. Moore goes through the whole thing with his eyebrow forever arched, tipping the wink at the audience – “You do know, dear boy, this is all dreadfully silly stuff”. Sometimes in Bond this humour gets a bit much – but here it’s pretty much pitched perfectly. And Moore looks like he is having the time of his life.

The film is crammed with action set pieces in striking locations: the Alps! The pyramids! A converted oil tanker base! Nothing is left to the imagination, and everything is thrown at the screen. It gets the sense of excitement right from the pre-credits sequence, with Bond’s high-speed ski chase across the alps from Russian would-be hitmen. Fools – what chance did they have? I don’t know what I like most about this scene: is it the wild ski stunts? The way music and camera action combine so well? The fact that it’s crystal clear Moore probably spent precisely zero days on location for this sequence? What am I talking about, it’s got to be that insane parachute jump at the end – with the camera leaving it just long enough for you to start to think “is Bond going to get out of this one?”. (Spoilers he does.)

That’s almost nothing compared to the famous Lotus-turned-submarine car chase, which pretty much set the standard for all the car-based action (not to mention gadget filled cars) that would follow in the franchise. The idea of a car that turns into a submarine: it’s both brilliant and so overwhelmingly silly that, like Bond at its vibrant best, it seems to transcend class and logic into a higher plane of excitement.

And all this with a plot that is almost staggeringly stupid. Jurgens has a lot of arch, naughty fun as scheming monomaniac (with subtle webbed hands) Stromberg, a pompous arsehole and a great villain. Of course he wasn’t a physical threat – hence the invention of Jaws, surely the most popular henchman ever invented for Bond. Jaws is a lunking, vicious but strangely endearing brute – it’s hard to put your finger on why he’s strangely likeable, maybe it’s just the totally absurd idea of a hitman whose killer tools are metal teeth. Maybe it’s because Richard Kiel has such a dorky sense of humour – and is as good at the glance at the camera as Moore himself is.

Of course it is a dated film – and it’s always the women that show it. If this set a lot of good Bond archetypes, then it also helped to cement a few bad ones. Anya Amasova is (allegedly) the greatest agent Russia has. Not that you would know it, as she stumbles in this film from moments of staggering incompetence and stupidity to victimhood and damsel-in-distress. There is a hint of character development – Bond offs her boyfriend in that alpine chase literally without a backward glance – but that’s soon forgotten by the end under Bond’s charms. The poor woman can’t even drive stick (“That’s reverse, let’s try again shall we” says Bond with smackable smugness) and by the end of the film she’s bikini-clad and being rescued by Bond. It says a lot when the strongest thing about her character is that her name isn’t an innuendo. 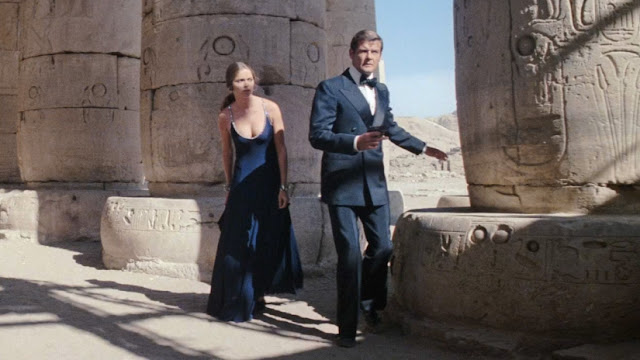 But you can let it go, because the rest of the film is such good fun. Everything is nonsense of course, and you could steer a submarine through the plot holes. If Stromberg only needs two submarines to start his evil plan, why on earth does he grab a third one at the start of the final act? (Just as well he does, of course, as otherwise Bond would never get on board his base.) Stromberg is ruthless enough to eliminate three underlings and to set up a nuclear war to wipe out the world – but those captured submarine crews he keeps alive, imprisoned, with a small guard, next to the armoury on his base. Ooops. His plan is almost effortlessly undone with a radio message from Bond. But never mind. It doesn't matter.

The point is that this is all great fun and basically set the tone for the next ten years of Bond films – until Dalton shifted gears. Moore is really good in it, as a sort of ringmaster of silliness – and he’s clearly enjoying it wildly. The Spy Who Loved Me is his best film – and for all its dumbness, its leaning into cheap humour, its ludicrous plot and sexist attitudes, it’s still up there at the top of the franchise. Because for a lot of people, all those negatives are exactly what they now expect from Bond.
Email ThisBlogThis!Share to TwitterShare to FacebookShare to Pinterest
Labels: 1977, Action Films, Barbara Bach, Bernard Lee, Curd Jürgens, George Baker, James Bond, Lewis Gilbert, Roger Moore, Spy thrillers