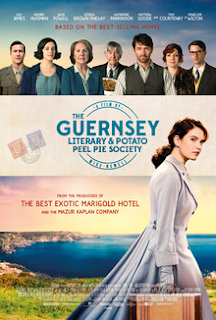 Every so often I get challenged to write a really short review. The Guernsey Literary and Potato Peel Pie Society is the sort of film where I could almost write a review that was shorter than the film’s title. Look at the poster – everything you are now expecting from this movie, it completely delivers. It’s as warm, unthreatening, comfortable and familiar as Sunday dinner at your Gran’s.

In 1948, novelist Juliet Ashton (Lily James – so winning you overlook the fact that she’s clearly too young for the part) receives a chance letter from Dawsey Adams (Michiel Huisman), a farmer in Guernsey. Adams tells her about the book club that sprang up between himself and other islanders during Guernsey’s occupation by the Nazis, where reading books gave them a chance to escape the horrors of the occupation. Leaving her slightly put-out American fiancée (Mark Reynolds) in London (one guess as to what romantic pairing we’ll end the film with, by the way) she heads to Guernsey to meet the group and write an article about them – and finds herself swept up in a mystery around missing member of the club Elizabeth McKenna (Jessica Brown Findley).

It’s a film that virtually writes itself, the sort of predictable Sunday-afternoon, British film where the 1940s look impossibly glamourous and everything turns out wonderfully happily in the end. You won’t be challenged by anything in it, you can simply sit back and enjoy it. Everyone involved in the film does clearly understand what they are making here though: it’s light, fluffy and unchallenging but it’s professionally made and everyone gives it their all.

Perhaps it’s a sign of how much the film is pitching for the Downton Abbey audience that it has no fewer than four actors from that show in key roles. Lily James is radiant and charismatic as Juliet – sweetly earnest and also with a determination to wrestle out a truth once she senses a story. It doesn’t take a genius to guess that she is going to be won away from her dull Yankee pilot (Glen Powell in a totally thankless role of blandness) by the earthy, romantic, caring and intellectually stimulating charm of Game of Thrones’ Dario Naaheris, Michiel Huisman (the sort of role an actor can play standing on his head but he’s still very good).

Penelope Wilton does some good work as a widow clinging to happier memories that she can’t bear to see affected by harsher truths. Jessica Brown Findley has little to do, but to be honest it’s not a problem as the part is such a straight re-tread of her Lady Sybil role from Downton she could probably do it in her sleep. The last Downton alumnus, Matthew Goode, is rather funny as Juliet’s sweet but good-naturedly exasperated publisher. For the rest of the cast, Katherine Parkinson oscillates between comic timidity and soulful sensitivity and Tom Courtenay gives a playful old man performance which can’t have stretched him.

Not being stretched is what the film is all about. Even the mystery at the film’s centre isn’t particularly gripping or – even when the truth is revealed – something that really has much impact on anything. And it’s hardly the focus anyway. It’s really a film that wants you to enjoy the photography and landscapes, and to root for the two leads to fall in love with each other. It wants you to feel little else, and carefully avoids getting you to invest your emotions in other aspects of the story so you can’t get upset. It’s the sort of film that you could call “lovely”, that passes an hour or two perfectly well, and at the end of it you’ll tell people it was fine. Then you’ll never think about it again. Ever.
Email ThisBlogThis!Share to TwitterShare to FacebookShare to Pinterest
Labels: 2018, British Films, Glen Powell, Jessica Brown Findlay, Katherine Parkinson, Lily James, Matthew Goode, Michiel Huisman, Mike Newell, Penelope Wilton, Tom Courtenay