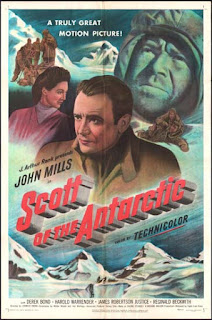 There are perhaps few more controversial figures in historical discussion than Robert Falcon Scott. The great polar explorer was, for most of his career, and for a long period after his death in 1912, a national hero, the man who – with stiff-upper-lip bravery – gave his life struggling against the elements to conquer the South Pole. Scott’s reputation only began to be questioned in the late 1970s, with a series of biographies culminating in a near-vicious – but compelling – anti-Scott argument laid out by Roland Huntford in his book Scott and Amundsen. Scott’s many flaws – both personal and in planning – set a new landscape for seeing his achievements as carrying too high a cost, especially in an atmosphere where the extreme sacrifice was seen as something to be avoided if at all possible, rather than an everyday fact of life for post-war generations.

In this context, watching this Ealing Studios 1948 Scott biopic – one of the biggest box-office hits of its year in the UK – is an interesting experience. While the film’s tone and its depiction of Scott are essentially fairly heroic, the film flirts at points with the errors and misjudgements that led to Scott leading himself and his companions into an icy immolation in a tent eleven miles away from a depot that could have given them a chance to survive.

Frend’s film is very well made and beautifully shot – so perfectly does it capture the look and feel of the Antarctic, and the extreme cold, that you overlook the fact that at no point can you see the actors’ breath – and it covers the main points of the expedition very well. It’s in some ways, today, almost hilariously stiff-upper lip, with the expedition members marching dutifully (and with a self-deprecating smile) to certain death, and the ladies at home speaking with such cut-glass primness you have to keep checking that Celia Johnson isn’t in the film.

There are some strong performances, not least from Mills (a very close physical likeness for Scott himself). Mills was the perfect choice for this role –overflowing with a sense of duty, but with a slight edge of idee fixe pride where it’s clear that he’s not willing to budge from anything to do with his mission. Harold Warrander also makes a strong impression as an artistic spirited scientist, Dr Wilson, who quietly hides his premonitions of disaster and later feelings of regret due to a sense of personal loyalty to Scott. Reginald Beckwith, James Robertson Justice and Kenneth More also give decent performances.

But the main appeal is the glorious technicolour look of the film. The film used no fewer than three photographers and brilliantly mixes together painted backdrops, studio locations and some genuine location footage with skilful and glorious aplomb. The technicolour tinge to the shots is wonderful – watching it in high definition, it’s like a series of polar expedition photos brought skilfully to life. The film in fact apes several of the famous photos from the expedition with such beauty that you feel like they could be printed and framed.

The plot however is more concerned with checking off the events of the expedition – from its conception, through its financing and recruitment, initial excursions and the final (futile?) march to the pole and the death march home. Frend’s film is clearly largely intended to be hagiographic – the men are by-and-large totally committed to the journey, there is nary a cross word between them, and the film never really questions the point or purpose of the journey – or if it was worth the lives of five men to achieve it.

However, there are moments where the film leans towards a more interesting criticism of Scott’s planning and leadership. The funding campaign is largely a disaster, bailed out only by a last minute donation. Scott ignores advice from famed explorer Nansen to take dogs (man hauling is of course more noble) and places far too much faith in motor sledges (he is shown ruefully staring at one after it breaks down). Equipment – not least the vital fuel canisters kept at depots – is shown to be inadequate. The dogs perform extremely well – far better than the horses. The film doesn’t avoid the grisly fate of the horses either – I’ve never understood Scott defenders who claim it would have been cruel for Scott to take dogs to the pole, but never question the working to death and shooting of ponies in conditions they were totally unsuited for.

The film skirts around the moral responsibility Scott bore for the death of the men who entrusted their lives to his planning. It does show – faithfully – the final depot being placed one degree less further south than originally planned (a shortfall that would contribute heavily to dooming the men later on). But as first Evans then Oates pass away, the film focuses on the tragic loss rather than the planning, preparation and “cut to the wire” contingences Scott was working with that contributed to this (not least his last minute decision to expand his polar party to five from the original number of four, sending three men back to base – with all rations and provisions having been packaged for two teams of four).

The film is less interested in this, more keen on showing the heroic progression of events. It gives us moments, but the main purpose of the film is to sing the praises of Scott. This means, for me, the film becomes more and more deficient as time goes on and the histographical debate around Scott becomes all the richer and more engaging. For all the qualities of the film itself technically, it doesn’t have anything to contribute towards this and just offers up the straight printing of the legend.

For me, by the way, Scott is almost the ultimate expression of Edwardian amateurness, taking on the most challenging environments of the world with a superb confidence in a “special role” for the British in history. While Huntford’s personal dislike for Scott stings too much, there are legitimate points to be made about Scott’s poor planning, his obsessive disregard for learning from his mistakes and his refusal to engage with or embrace the sort of Inuit techniques that Amundsen learnt from. And, at the end of the day, while you could say Scott was unlucky compared to Shackleton, whose equally disastrous expedition at least saw all his men return alive, the fact remains that Scott’s old-school, old-fashioned, Britain-shall-prevail-attitude led not only to his own death but the deaths of four other people in hellishly cold conditions thousands of miles away from their families. Say what you like for his bravery, but don’t forget the price that others also paid for it.
Email ThisBlogThis!Share to TwitterShare to FacebookShare to Pinterest
Labels: 1948, Anne Firth, Biography, British Films, Charles Frend, Christopher Lee, Derek Bond, Diana Churchill, Harold Warrander, James Robertson Justice, John Gregson, John Mills, Kenneth More, Reginald Beckwith