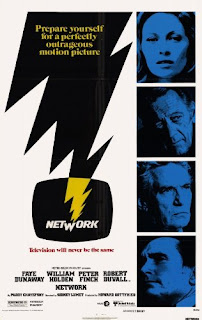 Is there any movie ever made that has been more prescient than Network? So spot-on was its vision of television becoming pushed to extremes by its obsession with ratings that when it was screened a few years ago for a group of teenagers in America, they allegedly didn’t realise it was meant to be a satire. I’m also pretty sure you would have to go a long way to find a better written movie – it’s no surprise that this has been converted into a successful play, it’s basically one already.

In the 1970s, UBS is a struggling TV network trying to find a niche among the giants. Its news show is losing its timeslot in the ratings – which is bad news for its respected anchor Howard Beale (Peter Finch). Informed he will be fired due to falling ratings, Beale goes on air and casually announces he will blow his brains out live on air next week. When this sends the ratings rocketing, the network sends him back on air, encouraging him to speak his mind more rather than just report the facts. When Beale suffers a full blown breakdown, his anti-establishment rants touch a public nerve and Beale becomes a ratings smash – with the news show taken over by ambitious Diana Christensen (Faye Dunaway), Head of Entertainment, who turns it into a bizarre light entertainment show, with the increasingly unhinged Beale the main entertainment. It’s perfect for everyone – so long as the ratings hold…

Network could so easily have become a shrill, OTT satire. Writing down the plot summary there, it even reads like that – a big, stupid, pleased-with-itself film that hits its points hard and where every character is a grotesque caricature. But that’s not the case here. This is a brilliantly written film – Paddy Chayevsky is surely one of the greatest writers in film history – a fiercely intelligent piece of satire, which most importantly crafts its characters with empathy and understanding. Some of them may be larger than life, and some of them may do things that are just this side of heightened reality, but at heart they all feel real. The film is shot through with heart and a sense of realism that underpins the razor sharp satire.

And that satire is all around the world of television. So astonishingly prescient is the film about the rise of reality TV, ratings obsessed and lacking in real soul, that many of its jokes pass by almost unrecognised today. Respected news producer Max Schumacher’s throwaway line about an hour of network TV drama being made up of films of car chases (and crashes) from the police? Done to death already. The idea (again unthinkable in the 1970s) that a news anchor could litter the air with their own opinions on the news and current affairs – half the anchors in America now run their shows like editorial pieces. The concept that the public could be entertained by watching someone clearly not completely normal, throwing crazed statements at the camera – it could only be a fantasy right? A TV network completely in thrall to its corporate masters, following the line from the bosses? Yup surely that could never happen. 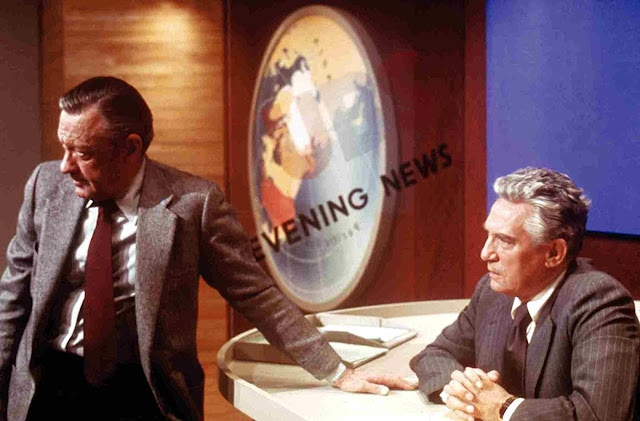 What Chayevsky does so well is turn these into masterpieces of rhetoric. Some of the greatest speeches ever written in film appear here, and they work because not only do they showcase some superb writing, but also every moment is crammed with ideas and real genuine feeling. Howard Beale may well be as mad as hell and not going to take it any more – but he articulates his reasons for feeling this with an acute emotional reality. Schumacher’s paens to the changing world of television, and his own lost place in it, are beautifully done. Diana’s ratings obsessed spewing of TV related facts and figures is sharply underpinned by our awareness all the time of the emotional reality of her near-inevitable emotional breakdown (surely only a few years at most down the line).

Given these lines, the acting is extraordinary (it won three of the acting Oscars in 1967). There isn’t a duff beat or performance in this film, and the delivery of the high-blown dialogue is simply outstanding, brilliantly directed by Lumet who was always a highly skilled director of actors. In fact, Lumet is often easy to overlook here, but his understanding of the material, and handling of its message and delivery, is a big reason for why it never becomes overbearing or trying. Away from the leads, he also gets superb performances from Duvall (chilling and on the verge of rage in every scene as the corporate suit who really calls the shots), Beatty (who had basically one speech, worked a day, and got an Oscar nomination) and Straight as Schumacher’s wife (who went one better than Beatty and won the Oscar for her one scene – the shortest Oscar-winning performance ever at just a few minutes).

Peter Finch won a posthumous Oscar for his role in this film – ill health restricted his “mad as hell” speech into only two takes (an extraordinary thought when you watch it). Beale is a gift of a part, an intelligent, compelling piece of showmanship – but Finch’s gift is to make the part feel real and human under the genius dialogue. The early scenes showcase Beale clearly struggling with depression, under the smiles, and already starting to crack. I love the way Lumet often frames Finch during these scenes – in group scenes he’s often to the edge of events, and he only slowly comes to the fore to gain a close up. Heck most of his first outburst on television is only seen by us on a viewing monitor in the control room (only the viewer seems to be listening by the way – the technicians are either gossiping or mechanically going through the motions of running the live broadcast, including countdowns to commercials).

Finch basically steals the movie, because you can’t shake from your mind his delivery of scenes like this one:

It’s even harder to believe that so many actors turned down the role – perhaps worried that it would seem like a pantomime role. One of those actors was William Holden – and thank goodness he did, because his grounded, bitter, crumpled, but still idealistic Max Schumacher is one of the film’s highlights. Holden gives one of his greatest performances – often overlooked under the flashy roles of Finch and Dunaway – making Schumacher the still centre of the film and, by its end, something approaching its powerless voice of conscience.

Faye Dunaway (also Oscar-winning) makes a great deal of the demonic role of Diana Christianson, the representative of the next generation of TV producers, concerned only with ratings over morals. It’s probably the least “real” of the characters, but Dunaway finds the vulnerability and fragility carefully hidden under Diana’s chilly self-confidence and ruthlessness. 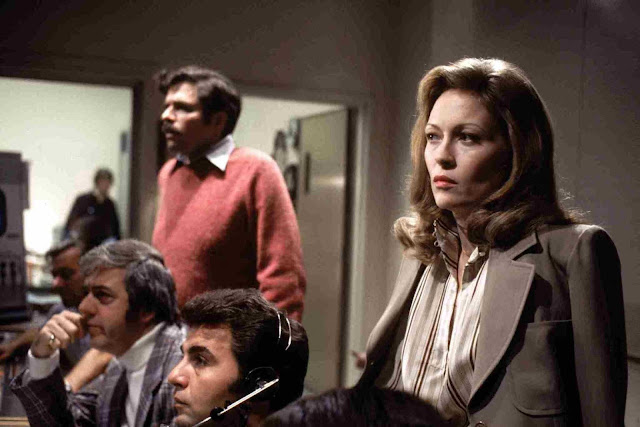 It’s Diana who drives the film, overseeing the transformation of the news hour into a bizarre variety show (including a soothsayer, amongst a host of eccentric magazine feature slots) where Beale is bought on to rant about the emptiness of our world and the horrors of our soulless age like some sort of dancing bear, his inevitable fainting fits greeted by roars of applause. (“What are you?” asks the warm up man of the studio audience “We’re mad as hell and we’re not going to take it anymore!” they delightedly cheer back).

The film runs a particularly dark streak alongside this with Diana’s plan to build a solid hour of entertainment every week from an embedded camera crew following the exploits of a gang of radical Marxist black-pantherist terrorists. The film gets a lot of slightly more obvious satirical material from this – the terrorists quickly lose their Marxist principles in hilarious fights around things like negotiating syndication rights – but its vision of television turning real-life horrors (repackaged) into entertainment for the masses is only a few degrees shy of where many channels have ended up today.

That’s the whole film – sharply intelligent about where the world is heading, but balancing this with a genuine sense of humanity and emotional intelligence around its characters. If Chayevsky’s screenplay – or Lumet’s direction – hit us over the head with the points the film was trying to make, we’d quickly switch it off. Instead it makes its points with wit and a sense of reality that makes it both horrifying and entertaining. But then it would always have its place in film history with that dialogue and the acting it inspires from the cast. Most of the actors give their best ever work here, and the script is one of the finest around. As for the view of television – well, if we haven’t reached where Network was by now, it’s surely only a few minutes in the future.
Email ThisBlogThis!Share to TwitterShare to FacebookShare to Pinterest
Labels: Beatrice Straight, Corporate Satire, Faye Dunaway, Media satire, Ned Beatty, Peter Finch, Robert Duvall, Sidney Lumet, Wesley Addy, William Holden