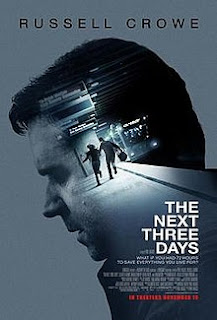 What would you do to protect the person you love? How far would you go to keep her safe? What would you sacrifice? What rules would you break? Paul Haggis’ serviceable thriller tries to answer these questions, but doesn’t really get much closer to the answers than I have here.

Russell Crowe is John Brennan, a teacher of English Literature at a mid-ranking college. One day, his wife Laura (Elizabeth Banks) is arrested for the murder of her boss. Despite her pleas of innocence, before they know it she is sentenced to spend most of the rest of her life behind bars. When desperation at the thought of her fate – and missing the upbringing of their young son – leads her to attempt suicide, John decides to take the extreme step of breaking her out of prison. But where to begin with the planning? And what will he be prepared to do?

It’s the sort of film that early-on has the lead character meet a ruthless expert (in this case an ex-con with a history of prison breaks, played with a growling enjoyment by Liam Neeson in a one-scene cameo) who outlines a list of rules and terrible things that the hero will be forced to do. The hero looks askance – but sure enough each situation arises and doncha know it the hero is forced to bend his own morality to meet the needs of his mission. What a surprise.

Only of course the film doesn’t have the courage to force Crowe’s John to actually do things that bend his morality. There is always a get-out clause. When his actions lead to him taking a petty criminal’s life (while stealing money from a drug den), it’s self-defence. When he looks like he may be forced to put innocent people in harm’s way, he backs away. When he’s asked to sacrifice something major, he refuses. The film wants to be the sort of film where we see the lead character change inexorably as he becomes harder and more ruthless to achieve his mission. But it worries about losing our sympathy, so constantly gives the audience and the character get-out clauses to excuse his behaviour.

Not that Crowe gives a bad performance – he’s actually rather convincing as a humble, slightly timid man way out of his depth at the start – but the film fails completely to show these events really changing the man. It believes that it’s turning him into a darker, more ruthless person, but it isn’t. At heart, this film isn’t really a character-study at all but a dark caper movie. Obstacles are constantly thrown in the path of our hero, many of which bamboozle him: but then when we hit the prison break itself at last, suddenly he’s pulling carefully planned rabbits and double bluffs out of his hat like Danny Ocean. It’s a film that wants to have its cake and eat it: to show a hero bewildered by his task, in danger from this ruthless world he finds himself in – but also to have him become a sort of long-game con artist thinking three moves ahead of the police.

It just doesn’t quite tie up. It’s the film adapting to whatever it feels the requirements and desires of the audience might be at a particular moment rather than something that develops naturally. Enjoyable as it is to see these sort of games play out, you can’t help but feel a little bit cheated – there has been no indication before this that the character has this level of ingenuity in him.

He doesn’t even really need to pay a price beyond that which he had accepted from the start: at points major sacrifices are dangled before him but he never needs to make any of them. He never has to really bend his personal morality significantly. It’s the cleanest conversion to criminality that you are likely to see.

The film cracks along at a decent pace – even if it is a little too long – and shows its various twists and reveals fairly well. Elizabeth Banks is pretty good as Laura, even though she hardly seems the most sympathetic character from the start (the audience has to do a bit of work for why Crowe’s character seems so devoted to her). Most of the rest of the cast are basically slightly larger cameos but no one disgraces themselves.

The main problem with the film is its lack of depth and ambition. Mentioning Don Quixote several times in the narrative doesn’t magically grant a film depth and automatically create intelligent contrasts with the novel. Instead it just sounds like straining for depth rather than actually having it.
Email ThisBlogThis!Share to TwitterShare to FacebookShare to Pinterest
Labels: 2010, Brian Dennehy, Crime drama, Elizabeth Banks, Lennie James, Liam Neeson, Olivia Wilde, Paul Haggis, Prison drama, Russell Crowe, Ty Simpkins