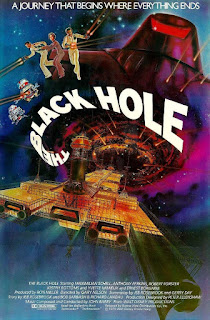 When Star Wars became a massive smash hit, every single studio assumed all they needed to do was to search out any damn space-set saga it could find, dress it up with a few Star Wars-feeling elements (usually shooting and funny robots) and, Bob’s Your Uncle, you would have a box-office smash of your very own. Well that turned out not to be the case – and Disney’s The Black Hole was a case in point.

At the end of a long mission, the crew of the USS Palomino is on the way back to Earth, when they discover a black hole with a spaceship hovering around it. The ship is the long-lost USS Cygnus, commanded by legendary genius Dr Max Reinhardt (Maximilian Schell). The crew are at first welcomed by the Cygnus – but is there a dangerous secret on board? You bet there is.

The Black Hole feels like several different types of story all very unsuccessfully stapled together.  There are elements in there of a 2001-style intellectual, “what does life mean” science fiction saga. But every time we start to get near those tones, up jumps a funny robot, or a bit of shooting, or an odd “haunted-house-in-space” sequence, or a mad scientist ranting. None of these stories, by the way, are particularly good or unique. They are all rather clumsily assembled. The tone of the film is also all over the place – so we get a comedy robot with funny bug eyes getting up to hi-jinks, closely followed by Anthony Perkins being ruthlessly killed by a drill (even if it is mostly offscreen blood and guts). Who is this film for? Too dark and grim for kids, too stupid and childish for their parents.

Robert Forster and Anthony Perkins look barely interested in the events around them (Perkins must have been wondering by this point in his life where it had all gone wrong). Ernest Borgnine plays the sort of blow-hard he could do standing on his head. Perhaps aware that most of the rest of the performers weren’t really engaged in it, Maximilian Schell acts for everyone. Never one to be afraid of going overboard, Schell’s wild-eyed enthusiasm leaves no scenery unchewed. It’s the sort of performance that seems to capture the wildly uneven tone of the film: so one minute Schell is a sort of space Byron, the next minute he’s literally slapping his head over the incompetence of his minions like some sort of Space Skeletor.

There really isn’t any actual plot in The Black Hole – it takes no more than about 40 minutes to hit the final “we gotta get off this ship” run around. There are some vague ideas bandied around about the spiritual meaning of touching the edge of God’s creation – but these barely get any air time. The last 30 minutes are a hurried dash through the ship, before we finally fly through the wormhole. This wormhole flight is left obliquely unclear (it’s crammed with odd imagery inspired by Dante), and I suspect there were more ideas in the original script that were cut when they basically decided to make this a kids’ film.

But then that’s like the whole film. It’s a 2001 wannabe that has been retrofitted into something as Star Warsy as possible. VINCENT and BOB are a low-rent R2-D2 and C3P0 (they even have basically the same personalities) and Dr Reinhardt’s robot followers are nothing more than imitation storm troopers with the Cygnus like some sort of Death Star. That’s not even mentioning odd touches, such as the ESP powers given to Kate McCrae. None of these elements fit well together at all. The special effects have dated very badly (surely they can’t have looked too impressive back then either?).

It’s also of course possibly one of the least scientifically accurate films ever made. Most of the black hole physics are errant nonsense (at least so I’m told, I’m not qualified to comment). But I know enough about science to know that if anyone ever spent as much time in the cold vacuum of space as most of these characters do, they would all be frozen and dead. Most of the last chase sequence sees the crew moving through the Cygnus as parts of the ship break off, with holes to space all over the place. One character even drifts out into space only to be dragged back in absolutely fine. I guess it’s for kids but it still immediately stands out as odd.

And then there is that ending. As our heroes head down into the wormhole, the film makes a play for some sort of cult classic status. Angles distort and bend. Bizarre imagery is thrown at us. Reinhardt merges with his robot Maximilian and seems to go to hell. Angels fly across the screen. Lights and whizzbangs. What is going on? I don't think the film knows: its the sort of cult classic stuff where it's left open to the viewer to give it more meaning than it probably has. The final emergence from the black hole is a total let down - hard not to have a "what was all that about?" feeling...

The Black Hole is just, to be honest, a little too rubbish. I mean there are elements in there I don’t mind: some people hate VINCENT, but I find him probably the most engaging hero (that’s probably a pretty damning statement). Schell’s scenery chewing (“MAXIMILIAN!!!!!”) is reasonably entertaining. Some of the chasing around is fun. Villainous robot Maximilian is very well designed and looks creepy. But it’s not enough. There is too much damn nonsense everywhere. It’s a film with no spiritual or intellectual depth, which means when it does try to leave questions answered it merely frustrates rather than making you think.
Email ThisBlogThis!Share to TwitterShare to FacebookShare to Pinterest
Labels: 1979, Anthony Perkins, Box office bombs, Disney, Ernest Borgnine, Joseph Bottoms, Maximilian Schell, Robert Forster, Roddy McDowell, Science fiction, Slim Pickens, Yvette Mimieux