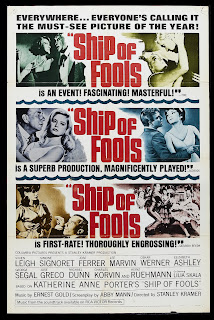 Stanley Kramer was the man who went his own way in Hollywood. Struggling to find work after returning from the Second World War, he set up his own production company which quickly specialised in critically acclaimed “message” films. It’s the sort of film making that hasn’t always aged well. Kramer’s style hasn’t often either – even at the time he was seen as achingly earnest and worthy. Ship of Fools was the sort of perfect project for him: a massive best-selling novel about a huge subject, humanity itself. It was about big themes and it felt really important. It was perfect Kramer material.

In 1933, a ship sails from Mexico back to a newly Nazified Germany. On board, the passengers and crew blithely continue their own personal dramas and obsessions – it really is literally a “ship of fools”, as we are informed in the film’s opening by wry observant German dwarf Carl Glocken (Michael Dunn) who serves as an occasional chorus. On board: a faded Southern Belle (Vivien Leigh) desperate to recapture her youth; a failed baseball player (Lee Marvin) bitter that his career never took off; a young artist (George Segal) intent on only drawing serious subjects to the frustration of his girlfriend (Elizabeth Ashley); a bigoted, bullying Nazi (José Ferrer) trying to start an affair with an attractive younger blonde (Christiane Schmidtmer); a Jewish jeweller (Heinz Rühmann) who thinks the Nazi party can’t be that dangerous; and ship’s doctor Willi Schumann (Oskar Werner) who finds himself increasingly fascinated with La Condesa (Simeone Signoret), a drug addict and a social campaigner being transported to prison in Spain. Truly, the whole world is on board this boat! (Or so you can imagine the poster saying).

The success of the individual moments in Ship of Fools rise and fall depending on the level of engagement you feel in each of these stories. It’s a curious mixture of tales, some of them dancing around deeper meanings, some playing like dark farce, some plain self-important rubbish. What’s abundantly clear is Kramer feels this is all leading towards meaning something, though whether he gets anywhere near expressing what this something is really isn’t clear. In fact the only real categorical message I could take about this is that humanity has a tendency to fiddle whole Rome burns – and that of course the Nazis are bad. 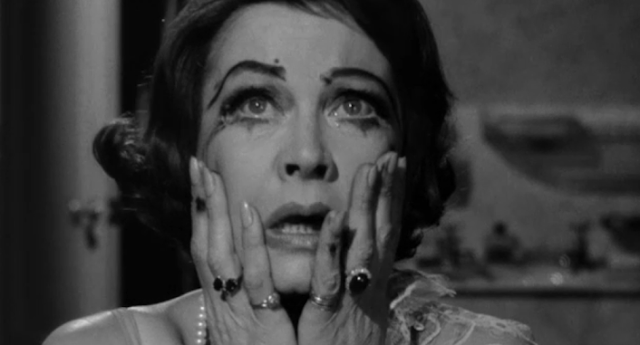 There is an attempt to suggest a world in microcosm – and some have argued that the smorgasbord of characters are basically like facets of one person’s personality – but really what many of these stories are deep down are soapy pot-boilers, brought to life by good writing and fine acting. Kramer marshals all these events with a professional smoothness: there is something quite admirable about the fact he clearly sees the director’s role as more like a producer’s, someone there to service the story and actors more than to cover the film with flash. It might not make for something compellingly visual, but it is refreshing.

What Kramer is less successful with is the heavy-handed importance the film gives its serious moments. Most infamous is a moment when Glocken and Jewish trader Julius Lowenthal are sitting on the veranda, listening to the band while chatting about current affairs in Germany. “There are nearly a million Jews in Germany. What are they going to do? Kill all of us?” Julius jovially states – the band music obviously ends the second he stops speaking, filling the screen with a chilling silence. It’s the sort of moment that is supposed to make us feel the chill of the oncoming storm – but instead feels manipulative and portentous. Every moment like that lands in the same way – the film is delighted with its exploration of these shallow people, very pleased with knowing the Nazi destruction is on the way.

This self-important bombast dates the picture more than anything else in it. Nothing dates as badly as pretension. It’s a film that feels like it’s been made very consciously to make you think, and which wears its attempt to capture every level of society – from poor Spanish workers to rich Nazis – very heavily. It also makes obvious points: naturally the only true act of self-sacrifice comes from a poor Spanish worker, while the rich passengers can scarcely look past their own concerns.

When it isn’t being self-important, the film too often finds itself mired in soapy rubbish. The plotline featuring George Segal as a failing artist and Elizabeth Ashley as a frustrated girlfriend is tedious beyond belief, a slog through the worst kind of coupley drama that adds very little to the film. A further plotline around the companion of a wheelchair-bound intellectual, obsessed with an exotic dancer on the ship, could sit just as easily in Coronation Street as it could in a highbrow drama like this.

Despite all this, I have to say much of the acting is very strong – even if many of the actors are cast very much to type. Vivien Leigh, in her last performance, struggled with immense psychological difficulties during shooting, but brings a heartfelt realism to divorced Southern belle Mary Treadwell (an even more heartfelt version of her Blanche DuBois than in Streetcar). Kramer also allows her one of the film’s few moments of imaginative spontaneity when she suddenly bursts into a Charleston before stumbling back to her hotel room.

Carrying a lot of the film’s emotional weight are Oskar Werner and Simeone Signoret (both Oscar nominated) as an unlikely romantic coupling. Werner brings great depth and sadness to the world-weary doctor who finds himself irresistibly drawn to Simeone Signoret’s Countess. Signoret channels her distant, fragile imperiousness from Les Diabloques and Room at the Top to marvellous effect as a woman struggling with an indolent drug addiction but who feels a genuine responsibility to the world. The quiet scenes between these two are the closest the film gets to touching some distant meaning, even if it never quite gets there – and again the points deep down are fairly straight forward. 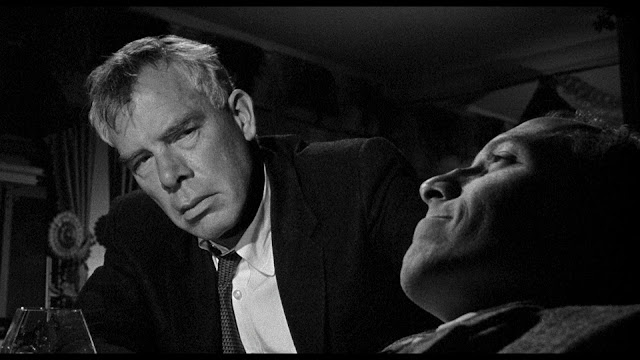 For the rest of the cast, there is hardly a weak link. Heinz Rühmann, in his only English-speaking role, campaigned heavily for the role of Jewish trader Julius and he is magnificent. José Ferrer swaggers convincingly as bullying Nazi Siegfried, even if he is saddled with the most obvious, poorly written, character. Michael Dunn (also Oscar nominated) makes a lot of his role as charming chorus and commentator. Lee Marvin is terrific as the frustrated and bitter baseball player. Charles Korvin gives a lot of depth to the thoughtful and compassionate captain.

Ship of Fools has plenty of moments of enjoyment. But as a whole it’s always a little self-consciously important, too determined to push you to be aware of the messages it wants you to take home. As the final shot sees a camera crane inexorably down onto a swastika you feel smacked around the face with the film wanting you to know that the darkness was just around the corner. The dread of Nazism should hang over the film like a shroud but instead it feels so repeatedly stressed to us that it loses all impact. The film wants us to know that we know more than the characters, and goes out of its way to remind us so that we can pat ourselves on the back when we spot the irony. Despite much of the quality of acting and dialogue, it gets wearing after a while.
Email ThisBlogThis!Share to TwitterShare to FacebookShare to Pinterest
Labels: 1965, Charles Korvin, Elizabeth Ashley, George Segal, Heinz Rühmann, José Ferrer, Lilia Skala, Michael Dunn, Oskar Werner, Simeone Signoret, Social issues, Stanley Kramer, Vivien Leigh