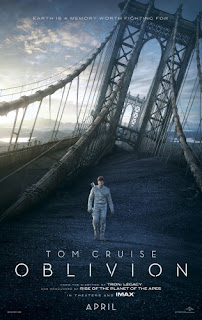 Spoilers: I’m going to discuss the entire content of the plot from the third paragraph. You’ve been warned!

It’s 60 years after an alien attack. The world has been destroyed, cities lie in ruins, and mankind has fled to Jupiter’s moon Titan. Earth is being drained of its last few resources to power the new civilisation on Titan by massive machines. Drones fly around the planet, protecting the machines from the last surviving alien forces still on Earth. The drones are tended by Jack Harper (Tom Cruise) and Vika Wilson (Andrea Riseborough), whose memories have been wiped for security reasons and who are dedicated to keeping the drones functioning.

Or is this all a lie?

Well it won’t be a huge surprise to hear that it is, of course. And there are some decent ideas in Kosinski’s film: the twist reveal that the organisation Harper and Wilson are working so hard to preserve is in fact the very alien invaders they so hate, or that the strange figures on the planet they are helping the drones to kill are actually the last surviving remnants of mankind. Harper and Wilson are clones of NASA astronauts captured 60 years ago and replicated over and over again in order to serve the robots. The “Tet” in space that they believe is their HQ is the alien mothership. These are all decent twists. So why do they combine together to have so little real impact?

I think it’s because Kosinski rushes the film. He’s so pleased with the narrative rug pulls that he seems to want to reveal many of them one after the other. Additionally, the biggest twist – Tom Cruise is actually working for the baddies! – immediately makes most of the rest easy to predict. Not least the constant references to Base 49 where he and Vika work – sure enough it’s a clone number, so the planet is filled with clones of this pair. The only thing stopping them bumping into each other is that they have been told everything outside of their “patrol zone” is irradiated and they must never enter it.

All of this world building – and the film does take its time establishing it a piece at a time early on – is interesting stuff. But it loses its way once the film surrenders itself to a string of reveals that overwhelm it. By the time we are watching super-man Jack shooting down drones from his helicopter, the film seems to have lost the more meditative start. With Jack at first we get a sense of a guy longing to find more depth to live with. But the film loses this sense, with Jack become steadily less interesting the more we find out about him.

Then once you accept the idea of Cruise and Riseborough being endlessly cloned, the logic gap starts to click into place. It’s never explained why the aliens are so reliant on human engineers for their drones – if they have conquered loads of planets before without them, why do they need them here? Furthermore, we are told the first wave of Jacks were mindless soldiers who killed everyone on the planet – why then are these engineer Jacks and Vikas given so much independent thought? Why not just make them automatons? Why clone them and then lie to them about who they are working for – why not just program them to obey the robots?

Then after a slow build of questions and revelations about Jack’s world, we get a standard Independence Day style mission up into space to “blow up the mother ship”. Of course this is a mission that only your man Tom can do. And do it he does, because Tom Gotta Do What Tom Gotta Do. It’s all a rather disappointing resolution to a film that toys around with being something a bit more complex and interesting earlier on.

Ah, Tom Cruise. To be honest he’s probably miscast here. There is something so incredibly, movie-star strong about Cruise that he somehow overpowers the shocks and make them seem silly. On top of which, the part is another ego-stroke. Jack is the ultimate man’s man – he fixes things, he loves sports, he builds a cabin in the woods, he’s clearly dynamite in the sack; but he’s also sensitive and caring and in touch with his feelings. On top of which both female characters in the film – Riseborough’s sadly besotted Vika and Kurylenko’s mysterious astronaut who lands on Earth and awakens strange memories in Jack – are both pathetic ciphers who need Tom’s help for everything, while of course also being way, way, way too young for the Cruiser.

But the film still looks good, and still has some very interesting twists. The design and visuals are faultless - in fact they seem to become the main focus, all those long shots of deserted, sand consumed parts of New York. Its main problem is that it’s low on themes – I guess it’s trying to make a case that humanity can’t be bashed out of us, no matter how many times we try and clone it out of someone – but it gets lost a bit in plot mechanics and the delight the director has in executing them. For a film that only really has four characters in it, I still felt they were hazy and undefined. A lot is left to the viewer’s own suppositions, so the film gets pretty reliant on your adding the depth it needs. If you are inclined to do so, this works. But the essential dramatic thrust of the film itself isn’t compelling enough to make you willing to make the effort the film needs.

Oblivion wants to be the next big, thoughtful, twist-filled, sci-fi epic. But it just doesn’t have enough interest and complexity to really engage the viewer. Instead it all becomes a bit forgettable – not because it’s bad but because, at the end of the day, it’s nothing special.
Email ThisBlogThis!Share to TwitterShare to FacebookShare to Pinterest
Labels: 2013, Andrea Riseborough, Dystopia, Joseph Kosinski, Melissa Leo, Morgan Freeman, Nikolaj Coster-Waldau, Olga Kurylenko, Science fiction, Tom Cruise