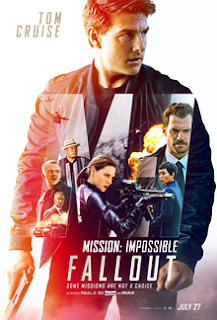 It’s probably not something many people would expect watching a Hollywood blockbuster, but part way through Mission: Impossible Fallout, as Tom Cruise motorbikes into a stream of traffic round the Champs-Élysées, I was reminded of Michael Crawford in Some Mother’s Do ‘Ave ‘Em. If there’s one thing these two have in common, it’s having a star willing to constantly go above and beyond to perform their own stunts. Which mainly makes you think as well that Crawford and Cruise are probably both a bit nuts.

Mission Impossible: Fallout picks up almost exactly where Rogue Nation left off. The villain of that film, Solomon Lane (Sean Harris), may be in custody, but the remnants of his organisation have reformed as The Apostles, chosen a new leader (known only by the pseudonym John Lark), and are trying to seize three nuclear warheads. Ethan Hunt (Tom Cruise) is deployed to stop them. During the mission, Hunt chooses to save the lives of his team rather than complete the mission – leaving the IMF force with a race against time to regain the warheads, and leading to clashes and alliances with enemies and friends old and new, including Lane and Hunt’s female counterpart Ilsa Faust (Rebecca Ferguson).

Mission: Impossible Fallout is big. By golly gosh it’s big. They aimed to make this the biggest and most stunt-filled, action-packed entry in the series – and they probably succeeded. More than any other film in the series, this one feels like a series of action sequences joined together by scenes of story and dialogue. Never has the overall aim of the villains, or their scheme, been so swiftly outlined – or essentially so inconsequential to the events we are watching. Do we need to know why the Apostles (an organisation we never even encounter in the flesh!) or Lane or any combination of the film’s baddies want to blow up three nuclear bombs in Kashmir? The film gambles that we won’t really care, that all we really care about is watching Hunt and co prevent them on a 15-minute deadline. It’s a gamble that the film more or less gets right.

The film also skims quickly, depending on you having seen the three preceding films so that it can spend time less on character re-establishment and more on those action scenes. It plays off emotions we have developed for the characters over previous episodes – and relies on us carrying across our knowledge of their past relationships. Alongside this, the film is crammed with callbacks to pretty much every film in the series – most prominently of all to Hunt’s marriage in the third film. This is a plot development, you feel, largely introduced to allow the characters to move on: it’s clear Hunt and Faust are the series intended romantic leads going forward (though Faust is never anything less than Hunt's equal in all areas), so we need to know that Hunt isn’t cheating on a wife somewhere along the line, and that they have mutually decided to go their separate ways. The film accomplishes this – and also allows a few beats to suggest that, under the surface, all this Impossible Missioning has given Hunt the odd small emotional problem.

But not too many, as establishing Hunt’s decency is pretty central to the film. One of its themes is Hunt’s unwillingness to sacrifice any innocents or indeed anyone who doesn’t deserve it. This theme runs throughout the film, and is used to suggest that part of the reason Hunt so often instigates such insanely grandiose schemes is that he is completely unwilling to let the needs of the many outweigh the needs of the few: give him the choice of sacrificing one man to get nuclear warheads easily, or jumping through the sorts of insane loops, schemes and dangers this film throws him into, and Hunt will choose the hard option every time. (Of course I could also be mean and say that Cruise has developed a character whose only real flaw is that he cares too much.)

At least this makes him really easy to root for. Which is just as well, as Fallout throws Hunt front and centre. Perhaps more so than any film since the second one, the team feels like a one-man army. Hunt does everything difficult or dangerous – which means Cruise is dragging himself to take on a number of insane stunts, from HALO jumps, to driving against the Parisian traffic, to hanging off the bottom of a flying helicopter. Of course, we also get no fewer than six speeches praising Hunt to the heavens – but when Cruise is willing to go such insane lengths (one stunt famously left him with a broken ankle and shut down filming for eight weeks) you can’t hold it against him that much. 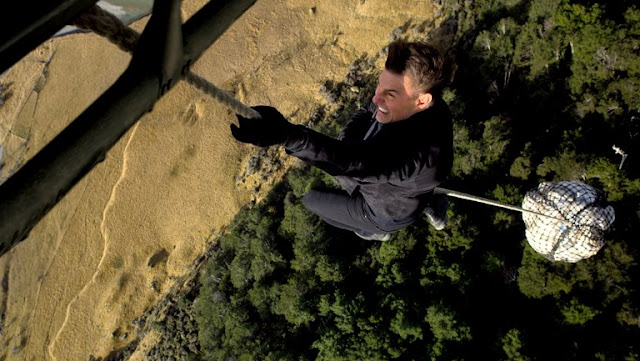 And like all the rest of the series, this is a very fun film. It takes a while for the sense of fun to really kick in – much of the first half-hour feels deathly serious – but eventually that sense of fun, of enjoying the lunacy, settles in and you start to run with it. A madcap chase over the roofs and office blocks of London that ends at the Tate Gallery is a perfect example of a sequence that mixes hi-jinks, death-defying stunts and tongue in cheek humour.

And that’s really the secret of this franchise. It’s a mix of absurdly OTT action, incredible dangers, and death-defying stunts that its star throws himself into with an insane abandon all played with a certain lightness of touch. The series, for all its world-endangering excitement and merciless villains, also has a family feeling behind it. Hunt’s team is his family and it’s that warmth which underpins all the drama. Fallout is huge fun – in fact, if it has any real flaws it is that it is too big by the end, with an action sequence that never seems to end – and a great rollercoaster to climb on board.
Email ThisBlogThis!Share to TwitterShare to FacebookShare to Pinterest
Labels: 2018, Action Films, Alec Baldwin, Angela Bassett, Christopher McQuarrie, Henry Cavill, Michelle Monaghan, Mission Impossible, Rebecca Ferguson, Simon Pegg, Tom Cruise, Vanessa Kirby, Ving Rhames, Wes Bentley