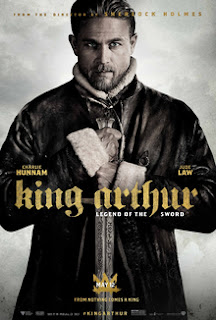 Okay we’ve all seen bad movies. And we’ve all seen movies that don’t make a lot of sense. But it’s a pretty special film that is both at the same time. King Arthur: Legend of the Sword is one of those. It is jaw-droppingly terrible and also insanely, ludicrously, incoherent. It’s completely impossible to follow what the hell is going on. Considering the studio planned this as the first of at least ten movies in an Arthur-verse, it’s practically a textbook on how not to start a movie franchise.

Anyway the plot, such as I can work out, is something like this: back in ye olde England times, magic and Mages have been nearly wiped out after (I think) an attempt by Mage Warlord Mordred to seize the throne. Then former Mage pupil and jealous brother of King Uther Pendragon (Eric Bana), Vortigern (Jude Law) kills his wife to get powers to seize the throne. Only young Arthur survives – and an unspecified period of time later (he ages, no one else does), Arthur (Charlie Hunnam) is a cocky geezer running a brothel in Londinium in the shadow of the Coliseum (yes really). Then one day Uther’s sword Excalibur turns up buried in a stone and Vortigern gets everyone to try and pull the sword out of the stone, so he can find the true heir (Arthur) and then when he finds him he puts on a show trial and it looks like he’s going to execute him because Arthur has become a legend in five minutes. Then Arthur is rescued by rebels who want Arthur to lead them, because the sword has special powers which Arthur can control if he can only get over his doubt and when it works… Oh God I can’t believe I’ve just tried to puzzle it out.

Scenes in King Arthur: Legend of the Sword follow each other with barely any structural link from one to the other. The film is convinced that the best way to pique our interest in a mystery is to throw us into the deep end and then info-dump flashbacks and voiceover throughout the film. The effect is rather like an ove- excited child trying to tell you a story (“And then a MASSIVE OLIPHANT SMASHED THE BRIDGE, and Uther fought it with a sword and it went boom and there was a big funeral and then Vortigern killed his wife and he was sad and he shouted and then a BIG DEMON killed Uther because the sword couldn’t go boom and then Arthur grew up”) who keeps leaving out the key details so has to throw them in later (“oh and Vortigen killed his wife because he needed to become a BIG DEMON and could only do it if he killed someone he loved and he had to become a BIG DEMON because it was the only way to stop Uther from making the sword go boom and he needed to get the sword – umm – well I’m not sure why but he needed it to build his tower. Did I mention his Tower? I think it was why he wanted to become King so he could build the tower. I think the tower made him a powerful magician. But of course he already was a magician he just wanted to be a betterer one. Did I mention that Arthur got the sword and made it go boom?”).

Instead the film showcases absolutely all the worst instincts of Guy Ritchie. All of them. Everything happens really fast and incredibly loudly. There are huge senseless battles and enormous CGI beasts who attack for no reason whatsoever. Arthur and his cronies are all transformed into cockney wide-boys, with Vortigern’s enforcers basically gangsters, all speaking with the Lock Stock rat-a-tat vibe that was fresh in 1998 but feels impossibly dated and tiresome now. This mixes with the ridiculously loud and fast pace of the film that makes it almost literally impossible to work out what is going on – and certainly makes it impossible to give a shit about anyone or anything in the film as events, characters, action and dialogue fly past with nothing dwelling to make any impact.

Everything has been thrown at this. Monsters! Gangsters! Chinese Martial Artists! Knights as Nazis (Jude Law's Vortigen hosts a full blown Nuremberg Rally)! None of it really ties together. Nothing makes sense. Everything is filmed dull and murkily. 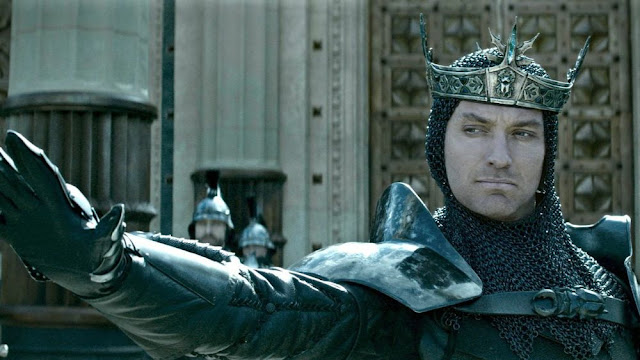 Probably because the producers worked out what they’d put together was an impossible turkey, the film has been cut to ribbons. To try and make a virtue of this, frequently characters explain events that are going to happen, while the events themselves play out on screen. Ritchie pumps this up to the next level by having the dialogue delivered with manic speed, which clearly passes in his mind for cool. This is when it explains things at all. More often events speed by so swiftly that we just have to assume massive time jumps have happened. This sword must be important (its name is in the title) but when it pops up out of nowhere, we get no sense that Vortigern has spent any time looking for it. Not only that, his system of forcible sword tests is both a well-oiled machine and something Arthur (who lives literally in the shadow of Vortigern’s castle) has never heard of. In less than two minutes of screen-time after he pulls the sword, Arthur is spoken of as a legendary figure who must be killed publicly to kill his legend. What? How much time is passing here?

The film has both way too much plot going on, and not enough interesting plot going on. It’s so determined to set up future movies that we get lots of incoherent information about Mages, magic and powerful swords dumped on us really quickly. Anything that could be seen as a “special effect” has been left in, while it feels like anything dialogue-related has been cut. So we have a way, way, way too long sequence of Arthur in some place called the Darklands battling monsters for reasons never explained by the plot (its stated purpose, to get him to master the sword, doesn’t even work – making it a complete cul-de-sac). We get a battle at the start where we literally don’t know who is fighting whom or why. At one point, the Mage commands a giant snake which pops up to save Arthur and is never used again. On the counterside, we are never clear what Vortigern is trying to do or why he seized the throne, why he is building a huge tower or why he needs the sword – or indeed why the sword is important other than it makes things go BOOM.

The actors stumble about the wreckage of this film, like shell-shocked survivors of some kind of apocalypse. Perhaps this is at last the end of Charlie Hunnam as a star of big budget movies – he is, to put it bluntly, awful: a complete non-presence. Jude Law swans through the film as if just turning up was repaying a favour to Ritchie – although god knows Vortigern is a character that makes no sense at all. The rest of the actors make no impact – Aidan Gillen looks a little ashamed to be there – with the one exception of Neil Maskell who gets some very small emotional force out a father-son relationship. But to be honest, this is one where you want to be forgotten.

A film that wants to start a franchise but gives us no reason to care about anyone in it, is on a hiding to nothing. What on earth in this movie would make you want to come back and see the future adventures of Arthur and Pals? I can’t think of anything. If you can work out what is going on you are welcome to it. Lord knows no one else wants it.
Email ThisBlogThis!Share to TwitterShare to FacebookShare to Pinterest
Labels: 2017, Aidan Gillen, Annabelle Wallis, Àstrid Bergès-Frisbey, Box office bombs, Charlie Hunnam, Djimon Hounsou, Eric Bana, Franchise Killers, Freddie Fox, Guy Richie, Jude Law, King Arthur, Terrible Films