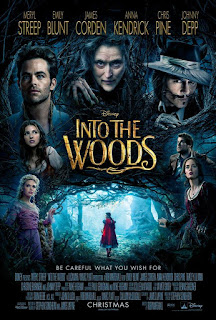 Musicals are big box office. Everyone has a side of themselves that enjoys the razzmatazz of song and dance numbers. In the world of the musical, Stephen Sondheim is often seen as the pinnacle of musical master craftsmen – and for years, studios had tried to bring Into the Woods, his musical reimagining of fairy tales, to the big screen. Was it worth it? Um, possibly not.

A baker (James Corden) and his wife (Emily Blunt) are desperate to have a child. A witch (Meryl Streep) claims she has cursed them after the baker’s father (Simon Russell Beale) stole magic beans from her garden. She will lift the curse in return for four items she can use to lift a curse on her – a milk white cow, a red coat, a glass slipper and some golden hair. Well if you know anything about fairy tales it won’t take you long to figure out which tales we are going to be heading into with that list – and sure enough Jack (Daniel Huttlestone), Red Riding Hood (Lilla Crawford), Cinderella (Anna Kendrick) and Rapunzel (Mackenzie Mauzy) all make appearances. But here the happy ending comes half way through the story – how will the characters deal with the impact of their choices when they have to face the consequences of their actions?

Okay I’m going to be honest, Into the Woods left me a little cold as just a musical. I didn’t really get into any of the numbers as they were playing, and the basic storyline is an odd combo: half satire, half social commentary on the dangers of getting what you want at all costs. I mean that’s clever stuff, and some big themes, but the movie certainly seems to wear them very heavily. And the movie also fails to make the musical sections engaging or inspiring – instead they are rather leadenly staged with very little real vibrancy or joy.

What’s already a rather disengaging musical isn’t helped by Rob Marshall’s leaden direction, which positions each scene with a flatness where the actors get lost in the wide screen and murky set design. Into the Woods is an astonishingly boring film to look at, murky and dimly lit, mistaking lighting (or lack of it) for mood. Every single scene is dingy and poorly framed, with events occurring in front of the viewer but never really getting engaging or interesting. Nothing strikes you interest.

It becomes a film that really isn’t that interesting to watch. This is despite some very strong efforts from nearly all the cast. Meryl Streep inevitably captured most of the praise as the Witch, and she is good, but there is something a little too artificial about her performance for my taste, something not quite heartfelt. But Emily Blunt is very good (and an excellent singer as well – who knew!) as the Baker’s wife, full of humanity and warmth. Chris Pine brings some excellent comic timing to the impossibly vain and preening Prince. There are plenty of other good moments as well, as most of the cast throw themselves into it.

But these moments keep getting lost in sequences that just aren’t interesting. For every amusing sing-off between the two princes on a waterfall, or moment of genuine warmth and charm between the baker and his wife, we get sequences of unbearable smugness (principally Johnny Depp’s appalling look-at-me cameo as the Big Bad Wolf). British character actors abound all over the place, but most have virtually nothing to do. In addition, the violence and horror elements of the original musical – as the cast deal with the terrible consequences of their actions and turn on each other – are toned down considerably.

In fact, as leading characters start dying left, right and centre, it’s not really shocking enough (as the darkness of their fates is skirted around), as Marshall’s camera meekly turns away  from anything that might cause a fraction of upset. Wasn’t the whole point of fairy tales – and I suppose the original musical – to deal with both the darkness and the light? Why make such a dark musical and then try and force it into being a 12A rating? Why make a movie that tackles dark themes and then shy away from them as often as possible?

It’s part of the slightly incoherent mood of Into the Woods – it never really clicks. It doesn’t really offer much to enjoy: the musical numbers (after the opening title number) are pretty unengaging, and they are filmed with a dull unimaginativeness. Despite the money spent on it, the film looks really cheap. While there are a couple of good performances, others – like Anna Kendrick – are trying a little too hard. It’s a story that is supposed to be about the dark heart of fairy tales, and how reality after a happy ending often isn’t as jolly as we think it is – instead it’s a story that never really feels like it’s about anything.
Email ThisBlogThis!Share to TwitterShare to FacebookShare to Pinterest
Labels: 2014, Anna Kendrick, Billy Magnussen, Chris Pine, Christine Baranski, Emily Blunt, James Corden, Johnny Depp, Mackenzie Mauzy, Meryl Streep, Musicals, Rob Marshall, Stage adaptation, Tammy Blanchard, Tracey Ullman