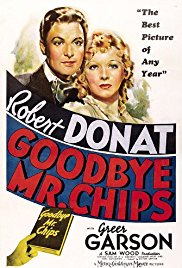 Goodbye Mr Chips is the sort of film that feels ripe for spoofing. The sort of idealised stuff-upper lip, Tom Brown’s Schooldays look at the past that should have you spluttering and chuckling. But it’s done with such warmth, such genuine emotion and tenderness, that instead you can’t help but feel yourself welling up while watching it. I certainly did (although I was watching it at half seven on a Sunday morning…)

The film follows the fortunes of Mr Chipping (Robert Donat) from his first joining the school in 1870 as a naïve young Classics teacher, struggling to exert authority over the children, to a beloved elder statesmen of the school in 1933. Along the way, he deals with a host of personal and worldly trials and tribulations, falls in love with a young suffragette Katherine (Greer Garson) who recognises his tender soul, and eventually helps the school through the national trauma of World War I.

It’s a quite beautifully done piece of old fashioned film-making, crammed with those moments of suppressed emotion and unspoken depths that get me every time. Maybe it’s something peculiarly English, but nothing can touch our repressed souls than seeing a kindred spirit struggle to keep his emotions locked down. Chipping loves his job, he loves the children he teaches and he will work tirelessly to give them the best start in life he can. The schoolchildren across 60 years are his children – can he express any of this before his deathbed? Of course not, he’s British.

It’s a film that celebrates the strength of that indomitable British characteristic of keeping on, of struggling forward, of keeping traditions and decency going. It’s a strongly conservative message, I’ll give you that, but it’s carried by such nobility and morality that it stresses the positives of this patriarchal affection. And Wood’s direction avoids over-sentimentality at nearly every point, helped by a wonderfully constructed script by Journey’s End playwright RC Sheriff (among others).

And Chipping himself is such a gentle, unassuming and kindly character – a decent, compassionate man who does everything he can to help others – that the film never feels forced. Indeed, it gives many scenes a real emotion. The courtship between Chipping and Katherine is all the more affecting for understanding how unnatural and difficult it is for the shy and reserved Chipping to open himself up to love. It’s also deeply sweet and endearing to see how Katherine is able to see past his awkwardness and bashful quietness to understand the caring, deeply humane person below the surface, and how hard she works to help this better man flourish.

This humanity is behind everything that Chipping does in the film: from the start it’s clear he cares deeply for the pupils at the school, even if he struggles to build a connection. It’s there on his first day where he tries – ineffectually – to comfort a new boy. At first he is led to believe domineering discipline is needed to keep his authority. What marriage – and Katherine’s love – teaches him is that he can allow people to see his natural warmth, and that personal affection makes discipline all the easier and natural. And makes him a better teacher.

It’s that romantic subplot between Katherine and Chipping that really gets the cockles warmed at the centre of the film. Beautifully played, with sensitivity and tenderness, by both Donat and Garson this is an extremely sweet relationship, where Katherine has to make most of the running to get round Chip’s shyness. You can enjoy – as Chip’s best friend Max Staefel (a lovely performance by Paul Henried) does – the fact that his colleagues expect Katherine to be some sort of aged harridan rather than a beautiful young woman. And it’s clear to see why the boys become devoted to someone warm, friendly and charming like Katherine. In Greer Garson’s first major role, she is superb – a character you feel as strongly about as Chips does, and feel her loss as deeply.

The death scene – and its reaction – nails everything perfect about Robert Donat’s Oscar-winning performance. Chipping’s shell-shocked, robotic return to work is a brilliant demonstration of his trauma, his determination to not let it affect his work, and (in his quiet, middle-distance staring) his utter inability to get over the pain of losing the most important person in his life. Donat’s performance is superb throughout, convincingly ageing over 60 years during the film, but never losing that consistent sense of Chips being a man who has to learn how to find the balance between the warmer side of his character and the needs of being in a position of authority.

It’s a balance he finds wonderfully, by slowly allowing his humour to be seen by the boys – winning him a reputation as a sort of beloved eccentric, and surrogate father to hundreds of boys. This comes together beautifully as he guides the school through the horror of World War I. The film captures perfectly the shock and horror – under that English reserve – of so many dying for so little, of entire generations of former pupils being lost. Donat’s speech in the church near the war’s end seems to capture these feelings of reeling at the senseless violence.

But what the film does so well is not to make these moments sickly, but play them straight and let the emotions of these moments speak to themselves. We don’t need sentimental camera tricks or swooping music, or zooms into tear laden faces. Robert Donat’s performance brilliantly plays into this – he’s an absolute pillar of gentle reserve and kindness and every moment (he’s in every scene) rings absolutely true. It’s a beautiful, gentle, star turn at the heart of a film that slowly becomes deeply moving.
Email ThisBlogThis!Share to TwitterShare to FacebookShare to Pinterest
Labels: 1939, British Films, Greer Garson, John Mills, Lyn Harding, Paul Henreid, Robert Donat, Sam Wood, School drama