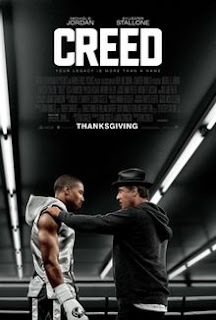 Remember Rocky IV? It’s a bizarre film that opens with the plot twist of Apollo Creed, Rocky’s rival-turned-friend, slain in the ring by a Russian fighting monstrosity. Well that film, for all its rubbishness, partly redeems itself by being the jumping-off point for this spirited and well-made re-launch of the series. (Strange as it is for a film as grounded as this one to bounce off from such a bizarre piece of 1980s nonsense as Rocky IV.)

Adonis Creed (Michael B Jordan) is the son of Apollo  Creed from an extramarital affair. Adopted as a young boy by Creed’s widow Mary Anne (Phylicia Rashad), Creed grows up to be a man who yearns to fight as a boxer – although whether this is motivated by a desire to get closer to his father or to try and outdo him the film subtly plays around with as a major theme. He approaches Rocky Balboa (Sylvester Stallone) to train him, who eventually reluctantly agrees, inspired by seeing something of himself in the young man. When Creed unexpectantly lands a title shot – while Rocky deals with increasing ill health – both men have to come together to fight for their pride and future.

Creed is a film that captures what works about this franchise, and repackages basically a very familiar story (this is almost point-for-point a Rocky remake) with a great deal of dynamism. Coogler, a talented and original director, brings imagination and intelligence to essentially pulpy material and makes something old seem new again. It does this while still homaging the previous films (even the rubbish ones!) at several points, from small stills on the walls of Rocky’s restaurant, to bit-part characters, to the marvellously beguiling score that gently riffs on the familiar motifs from the series.

It’s also helped by a fine performance from Michael B Jordan with a pretty much spot-on re-interpretation of the Rocky character in a new form. Jordan’s Creed is impulsive and quick-tempered, but also kind and charming. In fact it’s refreshing to have such a clean-living and well-brought up hero centring a film! Jordan gets some intelligent and subtle character work over Creed’s mixed feelings for his father: both resentful of never knowing him and also desperate to gain a sort of posthumous approval. It’s a basic daddy-problems story line but it’s done with a lot of subtlety.

Stallone’s performance as the ageing, slightly world-weary, lonely Rocky is another stand-out. This film’s Rocky is punched out, weighted down by life and unable to get over the sadness of his wife’s death; he sees young Creed as both a chance to find a new family and a reminder of his guilt over Apollo’s death. It’s a fine performance he gives here, detailed, moving and pretty much perfectly judged, with real moments of humour among the pathos. There is also an extraordinarily subtle make-up job on Stallone to make him appear far weaker and vulnerable than he actually is. It’s probably his best performance since the original film.

Coogler’s direction is spot-on, the pacing of the film is pretty much perfect. He shoots the fight scenes with particular freshness, the camera darting in and around the fighters as they beat each other in the ring. This immediacy adds a lot to these sequences – although the heavily choreographed fights, while great cinema, barely resemble a real boxing match! The film also balances really well both the training montages (many of which affectionately homage similar sequences from the early films) with a sensitive and well-constructed romance plotline between Creed and singer Bianca (well played by Tessa Thompson, who makes a lot of what is on paper quite an underwritten part).

It’s not perfect, don’t get me wrong. The decision to cast actual boxers in pivotal roles doesn’t always pan out, not least Anthony Bellow as Creed’s title rival (surely it’s easier to train up an actor than try to teach a boxer to act). For the English viewers it’s hard not to feel a few sniggers at the slightly strange sight of a title fight taking place at Goodison Park of all places (surely this film is the closest any Everton fan has got to seeing major silverware).

But its affectionate reworking of the tropes of the series works really well, it’s extremely well-acted, it has intelligent character work for both Creed and Balboa who become fully rounded and intriguing characters, and it’s very well directed. It becomes a film about the importance of family as much as it is about legacy, about the two lead characters having to come to terms with the loss of their loved ones and build a new family. For all that the events in the film are pretty close to a straight re-tread of Rocky, this is such a lovely, heartfelt film it’s hard not to like it a lot.
Email ThisBlogThis!Share to TwitterShare to FacebookShare to Pinterest
Labels: 2015, Boxing films, Graham McTavish, Michael B Jordan, Phylicia Rashad, Rocky series, Ryan Coogler, Sylvester Stallone, Tessa Thompson