In 2017 something quite extraordinary happened. A string of unpleasant allegations emerged about Kevin Spacey, turning him overnight from the toast of Hollywood into a pariah. Not good news for Ridley Scott’s Getty kidnap drama All the Money in the World, which was only a month away from opening – and had Kevin Spacey in a central, Oscar-bait role as J. Paul Getty. The film looked like box office poison – until Scott decided to reshoot large chunks of the film four weeks before opening, with Christopher Plummer taking over the role of Getty. And of course they would still make the release date.

John Paul Getty (Christopher Plummer) is an oil tycoon, and the richest man in history, worth at least a billion dollars (the film opens with a dry history lesson showing how Getty gained a monopoly for selling Saudi oil for the Saudis, thus becoming richer then Croesus and Midas rolled into one). Scott’s drama follows the kidnapping of Getty’s grandson John Paul Getty III (Charlie Plummer – no relation) in Rome in 1973. The kidnappers want $17 million dollars. The famously frugal Getty’s response is that he’s got 13 other grandchildren and won’t run the risk of seeing them all being kidnapped for cash, so he won’t pay a dime. This leaves the kidnapped boy’s mother Gail Harris (Michelle Williams) in despair – after a divorce from Getty’s son, she agreed to not take a penny and can’t pay the ransom. Getty does send his fixer Fletcher Chace (Mark Wahlberg) to work with the police and negotiate – but basically Gail hasn’t a hope unless Getty relents.

It’s astonishing Scott managed to completely recast, re-shoot and re-edit the second most important part in the film at such short notice – and apparently in eight days. It’s also brilliant that this gives us another vintage Christopher Plummer performance. With cold firmness, gimlet-eyed focus, and a dark twinkly charm which switches in a moment to disengaged indifference, Plummer is so perfectly cast as Getty you wonder why they didn’t get him in the first place. Plummer set a record as the oldest Academy Award nominee for his work on this film – and surely also set some sort of record in being nominated for an Oscar less than two months after he signed on to make the film!

We should be glad that Plummer got this great role – particularly as, to be honest, his performance and the story of how it came about is literally the only reason to remember this film. If it lasts at all it will solely be because of such chutzpah at defying the odds – as a film, this is a dud almost from start to finish.

Long, turgid, dull, lacking in any emotional or human interest, no sense of drama – rarely has a kidnap victim been so boring, or his fate carried so little tension – shot with a lazy blue filter that seems to say “it’s the 1970s, everything was a bit faded”, this turns a compelling story into a viewing chore. How can this happen? How can such an interesting story be made so bloody flat?

A film like this should either be a pressure-cooker, against-the-clock drama or a Faustian journey into the darkness of a man (Getty) who sold his soul for riches, or a sort of dark comedy wherein a billionaire refuses to pay out comparative peanuts. What it becomes is none of those things. It relishes Getty’s greed, but never really gets under the skin of what makes him like this. It gets bogged down in the mechanics of kidnapping but never makes them interesting. It enjoys (and most of this is down to Plummer) Getty’s indifference and selfishness, but doesn’t have the guts to go for black comedy. It’s a nothing film.

Part of it is the film’s odd opening structure. Much of the first 30 minutes is a confusing series of flashbacks and flashforwards, establishing multiple events – Getty’s fortune rising from the 1930s, the story of young Getty’s parents’ divorce in the 60s, the kidnapping of young Getty in 1973 – all are cut together with such a lack of regard for narrative drive that it’s both difficult to follow what is happening and when, and also hard to engage with anyone involved in the story. From there, when we reach a conventional timeline, events feel like they are being ticked off rather than being fashioned into a compelling and tense drama. It’s all just flat and lifeless. 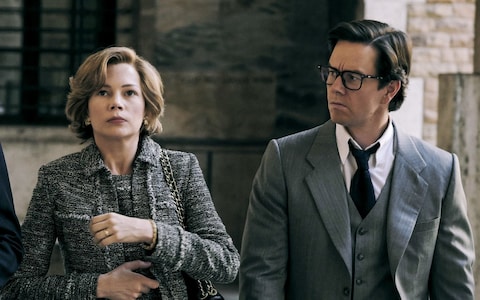 It should be a film where Michelle Williams’ Gail comes to the fore, and we feel her pain, fear and frustration at being unable to save her son. Instead she is competing with so many alternative viewpoints that her story gets truncated down into the sort of performance we admire as being basically good, but develop no real empathy for. It’s a real shame, but she’s a victim of this being such a dry and lifeless film.

It’s not helped that she also has to share screen time with Wahlberg. The two actors have virtually no chemistry whatsoever, and Wahlberg is way out of his depth here, totally unable to bring anything to the part other than his earthy chippiness. Chase is a dull character who ends up feeling increasingly irrelevant – eventually an invented scene showing him threatening Getty to stump up the cash is thrown in, you feel to give Wahlberg a “moment” rather than because it grows out of a sense that Chase has grown closer to Gail and her family.

But then that’s the whole film – it feels perfunctory and routine where it should be compelling. Rather than building a terrifying momentum as the kidnapping becomes more and dangerous for the young Getty, the tension seems to leak out of the edges. By the end you barely care about anyone involved in it. It really says something that, with only a week’s notice or so, Plummer blows most of the rest of the cast out of the water with his performance. He and his casting are the only reason to ever remember this turgid disappointment.
Email ThisBlogThis!Share to TwitterShare to FacebookShare to Pinterest
Labels: 2017, Andrew Buchan, Charlie Plummer, Christopher Plummer, Mark Wahlberg, Michelle Williams, Ridley Scott, Romain Duris, Thriller, Timothy Hutton