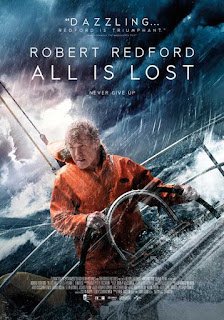 Imagine the horror of facing death alone in the middle of nowhere. To what ends would we go to try and avoid it? All Is Lost is a film all about that seemingly impossible struggle to defy the odds. It’s a gripping survivalist story, brilliantly assembled with a wonderful, near wordless, performance from Robert Redford.

Redford is our man in more ways than one, a nameless sailor on a voyage in the Indian Ocean. When his yacht is struck by an abandoned shipping container, he wakes up to find water pouring in from a hole in the side of the boat. With stoic determination, he sets about attempting to repair and salvage the ship, in the face of fierce storms, hull breaches, dwindling supplies, equipment failures and practically everything else the gods can throw at him.

JC Chandor’s film is a marvellously assembled and directed film that deals brilliantly with the intense claustrophobia of being alone in a small boat in the middle of a seemingly never-ending ocean. Despite being nearly wordless – after an opening monologue, Redford speaks no more than seven words throughout the rest of the film, one an exasperated end-of-his-tether scream of “Fuck!” after one more disaster – the film is full of sounds, and the never ending slap and lapping of ocean water is a constant reminder of the danger that surrounds the boat.

Chandor shoots the film with an immaculate intimacy: he carefully planned each shot so that the camera was never more than a certain distance away from the hero. The effect is to completely connect us with him –we feel as if we are right next to him, as immersed in his survivalist story as he is. It really makes the story feel as much like our struggle as Redford’s.

Redford is also a perfect choice as the hero. An actor who has (deliberately) worked very little over the last 20 years – focusing on his directing and producing projects – Redford’s cache is unpolluted by overexposure as so many other of his contemporaries are (could you imagine Al Pacino in the role?). Redford – amazingly for such a famous actor – disappears into the role. His performance is a masterclass in stoic underplaying, of grim determination. The film is a series of tasks that the actor is required to execute – repairing holes, trying to fix a radio, steering the boat through a storm, preparing meals – and Redford performs them all with an unshowy realism.

So committed is the film to the mastery of these details, that the entire story becomes increasingly engrossing. The bizarre thing is that the strange excitement of watching all these tasks being executed makes you want to jump in a boat yourself and head out to sea – even while watching Our Man face near certain death alone in the middle of the ocean. (Although I never, for one minute, could face adversity with such stoic determination – I’d be punching the walls of the boat and raging against the ocean). 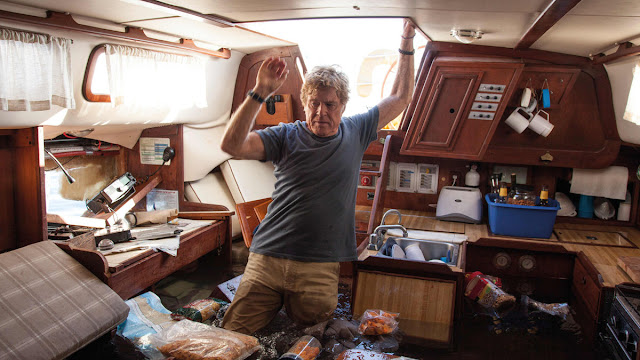 It’s that threat of near certain death that hangs over the film. Opening with a narration from Redford that sounds a hell of a lot like a last will and testament, while the camera passes by what will soon be revealed to be the abandoned shipping tanker that doomed the yacht, the expectation from the start is that it will not end well. How much does the man accept this over time? How much does the fear that this could be the end play on his mind (and for how long). The film ends (without wanting to give away too many spoilers) with a question hanging over the man’s fate, that you can decide depending on your optimism or realistic pessimism.

Chandor intended the film, I believe, as spiritual journey. The man goes through great hardship – in near wordless silence – facing a string of obstacles like some sort of biblical parable. The aim is for him to come to terms with himself – and to find peace with his fate and what his life has been. It’s a hard and difficult journey, but one that the man must travel in order for the journey to have meaning.

But it’s also about the desire we have to cling to life – to not let go no matter what obstacles are placed before us. How our best qualities sometimes emerge when we meet adversities like triumphs, about never letting despair enter our souls.  The man’s journey is engrossing and overwhelming because we all feel (or like to feel) that we would never despair or give up in the face of these odds. All Is Lost maybe the title, but it never really is until we give up.
Email ThisBlogThis!Share to TwitterShare to FacebookShare to Pinterest
Labels: 2013, JC Chandor, Robert Redford, Survivalist films