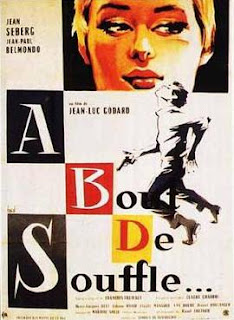 The French New Wave emerged from a group of film critics from influential magazine Cahiers du cinema in the 1960s, led by Francois Truffaut (who contributed a four page story outline to this film, although Godard later minimised his contribution as much as possible). The movement believed the director was the “author” of the film, stamping their personality on it. Packed with references to classic Hollywood movies, the films were shot with an improvisational lack of formality (that often hid brilliant cinematic technique) inspired by Italian neo-realism.

Breathless, Jean-luc Godard’s revolutionary masterpiece, was one of the central films in this school of filmmaking. It followed the last few days of Michael Poiccard (Jean-Paul Belmondo). A young man drifting through a life of petty crime, who idealises Humphrey Bogart’s style, he one day steals a car; it happens to have a gun in it, and in a moment of casual indifference he shoots a policeman trying to arrest him and flees. In Paris, while being hunted by the police, he reunites with his girlfriend, American student Patricia Franchini (Jean Seberg), and their self-absorbed relationship plays out under the shadow of the police net getting tighter and tighter.

Jean-Luc Godard’s film was hugely influential, as it seemed to re-write the rules of how films were to be made. Godard’s film is down and dirty, it’s almost guerrilla, but filmed with a wonderful, improvisational beauty. Shots are hand-held and dynamic, the action is all filmed on location, the framing is rough and ready, the camera gets up close and personal with the actors, throwing us in with them with an overwhelming sense of realism. The whole film feels irreverent, casual and cool, and gets a wonderful sense of urban Paris. It magnifies and reflects the very qualities the lead characters believe they have themselves.

Godard’s most influential touch was the use of jump cuts within scenes, with action jumping from moment to moment within a scene seemingly spontaneously, giving an impression of constant movement and ripping out the sense of time between actions. It also gives a sense of the film always driving forward, bouncing from beat to beat. According to rumour, this influential use of editing was a happy accident. The original cut of the film was well over two hours, and the distributors wanted something less than 90 minutes. Rather than cut whole scenes, Godard cut the small moments of movement or peace in scenes, giving the film a jagged freshness.

The whole film is full of these moments, the jumps over silences and conversational gaps, jumps in time lags between walking from point A to point B. It really works as well. The exterior scenes buzz with an exciting freshness. The long second act, basically nothing more than a conversation in a bedroom between the two leads, is edited almost like an action scene in a modern film – perfect for the self-dramatising energy the two characters are leading their lives with.

It’s those two leads who really help to make the film. Seberg picked up a quarter of the film’s budget to be the “name” lead, and she brings the film a soulful but distant sense of coolness. Belmondo was the real find, turning himself overnight into a mega star. In the sixties these were the people that your cool student wanted to be. Belmondo nailed his sense of iconoclastic cool in the opening moments – particularly when turning casually to the camera while driving his stolen car, to involve us personally in the story of his own life that he is constructing.

You can see how the performances (and characters) of the two leads had such impact on filmmaking. Energetic but also listless, contemptuous of authority and certain that whatever the world has in store for them it is definitely something more, self-absorbed and selfish, immature and convinced that their lives are more important that the average people around them – they are the predecessors of Bonnie and Clyde, of the young killers in Badlands. And nothing seemed to capture the counter-culture cool than Belmondo with a cigarette dangling from this mouth, apeing Bogart.

But both lovers are equally selfish and obsessed with their own stories. Or rather, self-consciously living their lives like they are in a narrative – in fact you could say that the film predicts the self-obsession of the social media age. Michael lives a life that is all an entirely constructed front. He’s a would-be gangster, with a carefully studied front of gritty cool. He spends endless time making sure that his look, his clothes, his postures, his manners are always spot-on. He constantly keeps up a stream of consciousness narrative about his own life and situation, positioning himself as the sort of representative of modern American hip.

And Patricia is the same. Although at first she seems the more natural and grounded of the two, it’s clear her self-obsession is just as profound (if not more so) than Michael’s. Patricia constantly reviews and rebuilds the narrative of her own life, discussing her romantic life like it was a carefully constructed fiction, or some sort of hyper-cool Mills and Boon. “Do I love you? Should I love you? Can I make myself not love you?” Patricia’s construction of her own narrative – and her desire to shape and control it completely – makes her as completely artificial as Michael is.

She’s so determined to construct her own narrative, that she shrugs off a string of revelations about Michael as if they didn’t exist. He’s a killer? Okay. He’s got at least two names? Hardly matters. He’s married? Nobody’s perfect. When deciding to betray Michael to the authorities, the action seems almost motiveless, but it quickly becomes clear that it is led by her latest review of the life situation and deciding it’s not what she wanted. Surrendering Michael to the law is her chance to say “No, I shape the story here – and I get to control who I feel love for, no one else”. By betraying Michael she is cutting a part of a life narrative out like she was removing a tattoo, something that she is not sure she wants any more but finds hard to remove.

One area where I do struggle with the film now is the attitude it has to its heroes. I think it wants us to kind of admire Michael – for all his faults – as some sort of unconventional hero looking to lead his life. I struggle to feel the engagement with a guy who is literally a murderer as much as the film wants me to – but I think this is the result of a major change from the more rebellious 1960s, to our changed times today. But then I’m also not sure that the film has as much heart as it wants to have – its characters are so consciously artificial that you never really get a sense of them as human beings. They are always characters, never people – and the film is always focused on their constructed images rather than anything real for you to invest in. There is much to admire, and not much to love.

And that doesn’t change the influential nature of the film. While it’s easier to admire the film than to love it – for all the strength of the performances, the characters are selfish fantasists – and its technical achievements sometimes distance as much as they throw us into the action, it’s still brilliantly put together. It’s masterfully made, and while I’m not sure it really has any heart, it’s got enough energy, force and urgency to make dozens of films.
Email ThisBlogThis!Share to TwitterShare to FacebookShare to Pinterest
Labels: 1960, Crime drama, François Truffaut, French cinema, Jean Seberg, Jean-Luc Godard, Jean-Paul Belmondo, Social issues