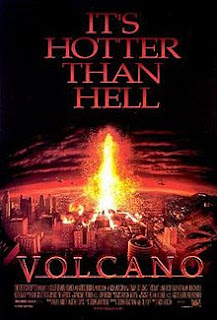 In 1985 Mick Jackson directed a film for the BBC called Threads. A masterpiece of nuclear terror, it showed the horrifying impact of a full-scale nuclear attack on Britain. Off the back of its success, Jackson got a ticket to Hollywood and the big time. Oh dear lord. Be careful what you wish for. Could Jackson really direct something so brilliant as Threads on a shoestring, and then something as unspeakably bad as this on a massive budget?

Volcano already felt dated when it was released in 1997. Imagine how it feels now. It’s a feeble disaster film, of the type where the heroes are all square-jawed types who just need to stop focusing on their super important jobs and look after their kids, and the villains are all greedy businessmen. Anyway a volcano goes off under Los Angeles (don’t ask) so disaster zone manager Mike Roark (Tommy Lee Jones looking so bored he can barely be bothered to deliver the lines) has to save the city and his daughter. Mostly his daughter. Literally everything you could expect to happen, inevitably happens.

Volcano is almost unspeakably bad. I mean I watched it expecting it to be rubbish, but at least sort of fun rubbish. But this is just, y’know, a rubbishy rubbish. For ages. It’s almost half the runtime before the volcano really goes boom – and then you are reminded how dull watching lava pour very slowly forward can be. And it moves very slowly. Despite this it keeps creeping up on the cast as it from nowhere. None of whom, by the way, you would miss if they failed to turn up to a dinner party, let alone if they were incinerated by molten rock.

The heat of that molten rock, by the way, changes according to the requirements of the scene and the plot armour of the characters. At least two red shirts (and the red shirts are easy to spot) are vaporised solely from being in close proximity to it early on. Later, the key heroes are suspended a few feet above it, or even splashed by it, and feel no real effect other than some hot shoes and a few burns.

Tommy Lee Jones is completely and utterly miscast in a role that he looks like he hated every minute of filming. Roark is your typical shouty man. He has family problems (needless to say these get fixed in the film) but his main quality seems to be his near creepy love for his daughter, a love that blinds him to all other events. Early in the disaster he abandons a fireman in a truck in order to carry his daughter away from lava (the fireman and the man who tries to save him instead die horribly). Later Roark tries to stop a vital explosion that could save the city because his daughter may be at risk having stupidly walked into the middle of the blast radius.

It doesn’t help that his daughter is the worst example of a dumb damsel-in-distress ever, frequently freezing up in the face of any danger and proving hopelessly incapable of showing any initiative. Never mind a volcano eruption, she’d be hopeless with toast burning. It’s as impossible to care for her as it is any other flipping character. To be honest I’d quite happily drop a pile of lava on all of them. That would at least be fitting with the film's vomit inducing infantile liberalism - "Why look" (to paraphrase a wiser-than-his-years kid who has nearly got himself killed) "Everyone looks the same under volcanic ash". Yup, whatever colour or creed everyone looks equally sad about being in this film.

Jackson directs this with a mixture of total lack of inspiration (not helped by some effects that looked painfully wonky even then), ludicrously overblown zoom shots (whenever something dangerous happens), and laughable camera work. It makes the whole film look and feel even more stupid than it does already. Will you care about anything that happens in the film? No you won’t. Will you laugh at it? Not quite enough to justify watching it.
Email ThisBlogThis!Share to TwitterShare to FacebookShare to Pinterest
Labels: 1997, Anne Heche, Disaster Films, Don Cheadle, Gaby Hoffmann, John Carroll Lynch, John Corbett, Keith David, Terrible Films, Tommy Lee Jones