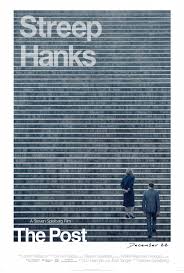 There are few things newspaper journalists like more than old-fashioned films about the glory days of the press, showing journalists to be uniformly noble, upstanding, seekers of truth. There are few things Hollywood likes more than films the feature Streep and Hanks and/or are directed by Spielberg. As such, it’s not really a surprise that The Post received laudatory reviews, or that it crept into the Best Picture list of 2017 (it only got one other nomination, inevitably for Streep).

The film covers the Washington Post’s decision in 1971 to publish details from the Pentagon Papers, originally leaked to the New York Times by former Defence Department official Daniel Ellsberg (Matthew Rhys). The papers detail the American government’s deceptive public messages on Vietnam, a war they knew to be unwinnable for almost ten years. The Nixon administration has blocked publication in the New York Times, but when the Post gets the same papers, owner and publisher Katharine Graham (Meryl Streep) and editor Ben Bradlee (Tom Hanks) have a difficult decision to make – suppress the truth or publish and face crippling legal penalties that could destroy the business.

The Post is quite similar in many ways to Spielberg’s Lincoln – a rather po-faced history lesson, told with panache, but essentially a dry civics lesson which draws some neat, but a little too on point, parallels with current events. Certainly it’s clear whom we are meant to be thinking of when the camera shows a shadowy Nixon in long shot from outside the White House, ranting into a phone in the Oval office late at night (admittedly, in a nice touch, the film uses the actual audio from Nixon’s Oval Office recordings). The parallels between press freedom and the spin of politics (or the charges of Fake News flung at any story the powers that be don’t like) are pretty clear. They are also pretty obvious.

Part of the film’s problem is that, unlike All the President’s Men (where the story covers full investigative journalism and Woodward and Bernstein need to piece the story together against the odds), this film hands everything to the journalists on a plate. It doesn’t even try to put a puzzle or some form of mystery before the viewers. Instead, the history is painstakingly (and drily) explained to give us the context, then each stage of the Post getting the papers is shown in simple and rather undramatic steps. There isn’t a sense – despite Bob Odenkirk’s deputy editor doing a bit of legwork – that the Post needed to work that hard to land the story. Crikey, you can see why The Times (who really did the crack the story) were a bit pissed at the film stealing their glory.

Once the papers are in the Post’s hands, the story almost immediately jumps to one night in which the papers are read and the board and the journalists squabble over whether they can legally publish or not. After that we get a swift coda where everything turns out fine, backs are slapped and the Supreme Court says it’s all good. There just isn’t quite enough drama. In fact we feel like we are watching a footnote, rather than the real story, which seems to be happening on the margins (for starters, the scandal of government lies on Vietnam, how The New York Times broke the story, and the Watergate break-in, a recreation of which rather clumsily closes the picture).

And I get that the film is trying to tell a story about how important a free press is and, yes, it’s great – but despite having a number of characters talk at length about this, I’m not sure what the film really tells us that we don’t already know. Instead it moves methodically but swiftly through events, carefully telling us what happened but never turning it into a really compelling story. Pizzazz for its own sake is not a strength, but a little more oomph in delivery here might have helped.

Alongside this, the film also wants to make points about the struggle of a woman in a man’s world and the institutional sexism (that probably hasn’t changed that much) of many boardrooms. Meryl Streep’s Katharine Graham – having inherited the company after the suicide of her husband – is a brow-beaten woman struggling to impose herself in a room of men whom she feels inferior to. Even this plotline though feels slightly rushed – we have Graham cowering in a boardroom meeting and struggling with paperwork, next thing we know she hesitantly makes the call to publish and is facing down her chief opponent (Bradley Whitford, rolling out another of his arrogant men of privilege). It’s all a bit rushed, perfunctory and all as expected – and Streep can clearly play this sort of role standing on her head.

But then the whole film has this slight comfort job feeling about it – everyone clearly invested in the story and the importance of the film’s points, but clearly without being challenged by the content. By the end of the film we’re are awash with clichés, from newspaper print rolling through old machines, to Graham walking through a crowd of admiring women outside the Supreme Court. The interesting and well assembled cast don’t get enough to do, with many of them feeling slightly wasted, not least Sarah Paulson in a thankless role as “the wife”.