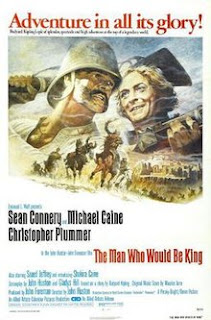 A glorious rip-roaring adventure, The Man Who Would Be King is exactly the sort of deeply enjoyable Sunday afternoon viewing you could expect to see playing out on a Bank Holiday weekend on the BBC. Which is enough to make you often overlook that this is quite a dark, even subversive film in amongst all the fun.

Adapted from Rudyard Kipling’s short story, the story follows Daniel Dravot (Sean Connery) and “Peachy” Carnahan (Michael Caine): cashiered NCOs from the British Empire, bumming their way round the Raj in the 1880s, picking pockets and scamming everyone from local rajahs to British commissioners. But their dream is to travel to the distant land of Kafiristan, a country almost unknown in the West, where they hope to help a ruler conquer the land, overthrow him, clean the country out and head back to the West. Arriving after a difficult journey, their plan goes well – but is put out of joint when Dravot is mistaken for a god…

Strange to think that John Huston had this project in development for so long that his original intended stars were Clark Gable and Humphrey Bogart. After the project faltered for so long that those two stars sadly died, Huston shopped it around to most actorly double bills around Hollywood. Finally he settled on his ideal choices for these very British scoundrels: Paul Newman and Robert Redford. Fortunately, Newman took one read of the script and essentially said “John they’ve got to be British”. Connery and Caine were suggested – the rest is history.

And just as well they were suggested, as the film’s principal delight is the gorgeous interplay between the two star actors, happily embracing the film as if they knew they’d never get to bounce off each other together on screen again. This is one of the warmest, most genuine feeling friendships between two characters captured on film, Dravot and Peachy are so clearly heterosexual life partners that they are willing (after much bickering) to forgive each other virtually anything. On top of which, the two actors play around with each other like old-school stage comedians, matching each subtle raise of an eyebrow with a wry half smile.

Connery is of course perfect as the man succumbing to hubris, his Scots burr spot on for Dravot’s slightly pompous “front man”, while Caine excels as the more sly, fast-talking Peachy. The finest moments of the film feature these two interacting, from performing long cons, to hysterical laughter when death feels near on a snowswept mountain, to the final (emotionally stirring) moments of sacrifice and support.

Because yes, with the film opening with a decrepit Peachy recounting his story to Kipling (an engagingly plummy performance from Plummer – no pun intended) you just know this little boys’-own adventure in the East isn’t going to end well for our heroes. Huston, however, still manages to make the whole thing feel like an excellent jaunt, even though the devastation is clearly signposted from the start.

Huston’s film is shot with a sweeping, low-key excellence – Huston was a master at putting the camera in place and then basically not getting in the way of the story. He totally identifies from the start that it’s the relationship between the two leads that is the real emotional and dramatic force of the film and never allows anything to obstruct that. He’s smart enough to also get a bit of social commentary in there, around imperialism and the entitlement that means these lower-class Brits feel that they should have their share of other people’s counties. But these themes never unbalance the picture. Instead they counterbalance it – however much we enjoy the leads cheek and charm, we can’t forget that in many ways they are immoral conmen, who represent some of the worst riches stealing excesses of the British Empire.

The slow spiralling of Dravot into the sort of man who wants to stay behind and build a dynasty in Kafiristan works extraordinarily well. Connery perfectly suggests the ego and love of attention that motivates many of the actions of this natural showman. From the first battle, when an arrow fails to kill him, we see him slowly realise and enjoy the implications of this fame. His rather touchingly childlike pleasure in dispensing justice (even if Peachy has to quietly correct his maths in the middle of one case) and spinning fantasies about sitting on equal terms of Queen Victoria don’t turn him into a monster or an egotist, but more of a kid who is running before he can walk.

It’s the sense of fun that keeps you watching – and also what gives the final few moments their emotional force and power. It works because it never harps on the darker social commentary it contains, about the corruption of British rule, and the greed of these buccaneering adventurers. Superbly acted – as well as the leads, Saeed Jaffrey is very good as a Gurkha soldier who acts as translator for our two con-men – and extremely well filmed, with the sweep and grandeur of India coming across strongly in Huston’s careful camerawork, this is a hugely enjoyable film about friendship that has all the fun and vibrance of a con film wrapped in an epic adventure.
Email ThisBlogThis!Share to TwitterShare to FacebookShare to Pinterest
Labels: 1975, Adventure films, Christopher Plummer, Historical epics, John Huston, Literary adaptations, Michael Caine, Saeed Jaffrey, Sean Connery