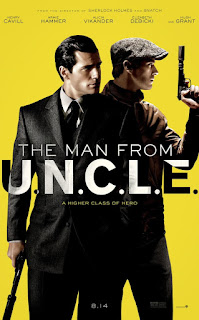 The Man From U.N.C.L.E. was a 1960s TV spy caper series, which I confess I’ve never seen an episode of but I’m reliably told (by my wife who has) that it’s all larks and fun. This Guy Ritchie remake, on the other hand, is a tonal mess that has no idea what the hell it is. Only Hugh Grant gets anywhere near to appearing in a caper movie – probably because he’s virtually the only member of the cast who might have grown up watching the original series.

Anyway, in the early 1960s Napoleon Solo (Henry Cavill) is an international master-thief turned CIA agent (this suggests his character is a whole lot more fun than he actually is). Ilya Kuryakin (Armie Hammer) is a KGB super-agent, dealing with issues of psychosis (yup more fun to be had there). This odd couple are ordered to team up and work with car mechanic (no seriously) Gaby Teller (Alicia Vikander), whose father is working with renegade Italian fascists, led by femme fatale Victoria Viniciguerra (Elizabeth Debicki), to build a new nuclear mastery over the world. Or something.

It should be a ridiculous, overblown, mix of Bond and high 60s camp. Instead it’s dreary, chemistry-free, largely uninvolving sub-Mission: Impossible high jinks that I’m not ashamed to say I dozed off during at one point. Would that I had slept through more of it. It's quite damning when the most enjoyable thing about it is thinking about the accent Olympics going on (we have a Brit playing an American, an American playing a Russian, a Swede playing a German, an Australian playing an Italian, an Irishman playing an American...).

No matter which way the three leads are arranged, Cavill, Vikander and Hammer have no chemistry at all in any combination. There is precisely zero bromance between the two leads. Vikander and Hammer have a will-they-won’t-they romance that comes from absolutely nowhere and leads nowhere (set up for sequels that will never come). Cavill looks the part, but completely lacks the cheeky, self-confident, “I’m-enjoying-all-this” charm that the part requires – instead he’s flat and boring. Hammer has more of the winking-at-the-camera cool, but he’s saddled with a part that frequently requires him to burst out in hotel-room-trashing outbursts of anger. Vikander just looks a bit bored with the whole thing.

These rather joyless characters go through a series of action set pieces, none of which got my pulse racing, and all of which felt like off cuts from a lousy Mission: Impossible sequel. Car chases, fisticuffs, gun fights, explosions, boat chases – they all tick by with no wit or pleasure involved anywhere. In these sort of things, you need to feel the characters are such adrenaline junkies that they sorta enjoy the crazy antics they get thrown into – you don’t get any of that from these three.

Much as I like Elizabeth Debicki, she can do little with her underwritten part – I mean I get that the plot isn’t the main thing in a film like this, but they could have at least given our villain a character. Instead she is as cardboard cut-out as the rest of the storyline. The acting from the bulk of the cast is also really odd – some seem aware they are in a tongue-in-cheek spy film, others seem to think they are in an espionage thriller. It’s a mess. There are scenes of pratfall comedy followed by grim scenes of torture and violence. In one juddering moment of this spy romp, the flipping Holocaust is dragged in as a shorthand for identifying a character as an “ultimate villain” – which given he had our hero strapped to a chair and was about to torture him, I think we could all have worked out without exploiting genocide. Anyone else think pulling this appalling real world event (with photos!) into a stupid caper movie is really tasteless? Did no one watch this thing while it was being edited?

I will say the design is pretty good and it’s well shot. But compare this to the fun and games of Guy Ritchie’s Sherlock Holmes films (which this is obviously trying to emulate) and the total lack of chemistry at its heart becomes immediately clear. Hugh Grant is a complete relief when he turns up as he’s the only actor who actually looks like he is enjoying his part and wants to be there. It was a big box office bomb and it’s no surprise. No one is having fun, the spirit of the original series seems to have been completely lost, and the lead actors totally fail to bring the leading-man pizzazz the film needs. Perfect if you want a nap.
Email ThisBlogThis!Share to TwitterShare to FacebookShare to Pinterest
Labels: 2015, Alicia Vikander, Armie Hammer, Christian Berkel, Elizabeth Debicki, Guy Richie, Henry Cavill, Hugh Grant, Jared Harris, Luca Calvani, Remakes, Spy thrillers, Sylvester Groth, TV spin-off