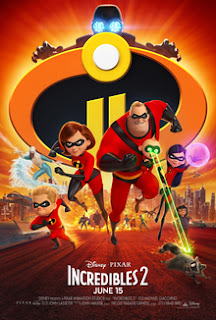 Fourteen years? In Hollywood that is nearly an eternity. Can you even imagine a film released today getting its first sequel over a dozen years later? But that is how long we’ve had to wait for a sequel to The Incredibles.

Picking up immediately after the first film finished, the efforts of the Parrs, Bob/Mr Incredible (Craig T Nelson), Helen/Elastigirl (Holly Hunter), their children Violet (Sarah Vowell) and Huck (Dash Parr) and their friend Frozone (Samuel L Jackson) to stop the Underminer only lead to destruction. Superheroes are once again anathema to the authorities, but tech millionaire Winston Deavor (Bob Odenkirk) and his inventor sister Evelyn (Catherine Keener) are determined to change their reputation. Their plan? Use Elastigirl as the new “face” of responsible superhero-ing. Elastigirl takes on a new threat: the villainous Screenslaver who uses screens to hypnotise people and control them. Meanwhile, Bob has to cope with the pressures of being a stay-at-home dad, dealing with with teenage crushes, homework challenges and controlling super-powered baby Jack-Jack, who can barely control his never-ending series of powers.

And the world of Hollywood has changed so much since the first Incredibles film came out. Back then, comic book films were only just starting to come into fashion, and the Marvel Cinematic Universe didn’t even exist. So can The Incredibles forge its way in a cinematic landscape now overstuffed with superhero derring-do?  Well yes it does, because the film hasn’t lost the sense of what was so enjoyable about the first film. We still get all the action-packed excitement of some damn fine adventure sequences, choreographed with skill and wit. Playing alongside that we get all the homespun domestic turmoil of modern family life, right down to a dad struggling to help his son with his homework (“How can they change math?!”) and trying not to mess up his kids’ lives.

The film resets the table to get us back to the situation of the first film – superheroes are illegal and unwanted and anything the Parrs do is going to have to be under the wire. And then it spins out a twist on the first film – this time it’s the super-competent and intelligent Elastigirl who will be the hero, while the more old-school Mr Incredible stays at home and looks after the kids. This combination works perfectly – Elastigirl is a brilliantly conceived character, cool, calm, collected, super smart, ultra-determined and ridiculously good at what she does. Holly Hunter’s southern tones are smoothly perfect for this part, investing it with just the right level of humanitarianism.

Really I should be annoyed about the end of the last movie being so completely reset in the opening minutes of this one, but truthfully the idea of superheroes struggling to balance everyday problems with illegal super-heroing is such a totally brilliant idea you are really happy to see it play out again, this time adding the dilemmas of Mr Incredible suddenly being thrown into a situation he can’t handle – having to be a regular dad – and collapsing in an unshaven, exhausted mess.

Seeing someone struggle with such everyday problems is hilarious enough, but the film has a USP in the challenges of looking after cute little ball-of-trouble baby Jack-Jack: a sweet, blubbering little kid with a regular smorgasbord of powers, none of which he is able to control. Bob’s struggles to deal with this explosion of wildness (everything from laser rays to moving in the fourth dimension) throw up endless hilarious moments and sight gags that had me laughing out loud (probably too loud) in the cinema.

Sitting alongside this, Brad Bird hasn’t forgotten how to shoot and cut an action sequence – whether it’s animated or not. A chase where Elastigirl has to stop an out-of-control train is not only hugely exciting, but also tense and witty. Elastigirl is also such a relatable character that she adds huge amounts of human interest to every one of these action bits, and her determination to save lives – even of her enemies in exploding buildings – is really rather touching. The final action sequence doesn’t quite match the highlights of the first film, but it does excellent work.

Of course the villain is in fact using these strengths against her. If the film has one weak point, it’s that the identity of the villain is really rather obvious from the start. I pretty much guessed immediately who the villain was going to be. I can’t see anyone of any age being fooled, and the motivations of this villain seem a lot more rushed and less interesting than those of Syndrome in the first film.

But that feels like a minor blemish on what is an excellent sequel, a real gem in the Pixar cannon. It's still got the brilliantly retro-cool design that mixes the modern world with the 1950s and 60s. Michael Giacchino's soundtrack is cracking. Brad Bird brings himself back as scene-stealing superhero costume designer Edna Mode. What's not to like? I wouldn’t mind waiting another 14 years if they produce a third film as good as this one.
Email ThisBlogThis!Share to TwitterShare to FacebookShare to Pinterest
Labels: 2018, Bob Odenkirk, Brad Bird, Catherine Keener, Craig T Nelson, Disney, Holly Hunter, Pixar, Samuel L. Jackson, Superhero