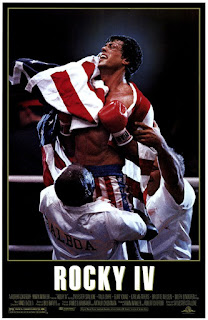 By 1985, Rocky Balboa had come from behind to overcome adversity through sheer willpower no fewer than three times. We’d seen him come from obscurity to fight Apollo Creed, lose his money, fight Creed again, win, get shamed in the ring and lose his belt and trainer on the same night, then come storming back to beat Mr T. We’d had training montages aplenty as, for every major fight, Rocky needed to learn how to box in a new way. We’d seen him take punishment like nobody’s business in the ring as better opponents pummelled him before coming up against Rocky’s iron will. So in Rocky IV we got… well, more or less exactly all that. Again. But in Russia.

The ideas had gone, the inspiration had tanked. There was nothing new to do. Rocky IV is a very short film – and it could easily be shorter again if the padding had been removed. Apollo Creed (Carl Weathers) takes on Russian uber-fighter Ivan Drago (Dolph Lundgren) in the ring in a charity match. Drago is a mountain of Soviet athletic engineering and he beats Creed so badly, Creed dies. In Rocky’s arms of course. So Rocky Balboa (Sylvester Stallone) does what a man has to do – he’ll fly to Siberia and he’ll fight Drago on his own turf, all to avenge the memory of Creed. And for American pride. And along the way he’ll only go and get the Russians to rethink this whole Cold War thing.

Rocky IV is so painfully short of ideas, you’ll feel like you’ve seen it even before you’ve seen it. In fact, at least 10 minutes of it you have. The film opens with essentially a complete recap of Rocky III, including the closing scenes of that film. Later Rocky goes driving to the airport. Along the way he hits the radio in his Lamborghini (the product placement in this film is shockingly crude) and listens to the whole of No Easy Way Out by Robert Tepper, while the film plays a montage that recaps all three of the previous films. The scene might as well end with the title of the song appearing in the bottom left hand corner like an old MTV video. (Stallone’s rolodex was obviously well thumbed, as James Brown later pops up to deliver a rendition of the whole of Living in America.) This sort of stuff pads the plot absurdly.

Either side of that, we have two long training montages comparing the homespun honesty of Rocky’s training with the naughty, doping inspired, technological training of Drago. But then this is not a subtle film. Any film that opens with two boxing gloves – one American, one Soviet – flying towards each other and exploding isn’t exactly pulling its punches on the subtlety front. The political commentary in the film is laughably naïve, from Creed’s inane chatter about American pride, to the laughable depiction of the Soviet officials as distant Bond villains, to Rocky’s closing speech after his victory (spoilers) with its infamous “If I can change, you can change!” refrain. Did the makers think they were putting a hammer to the Berlin Wall here or something?

Most of the rest of the film moves between padding and the bizarre. Almost every single scene ends with a freeze frame, possibly one of the most clunky visual devices you could hope to see. Stallone as director focuses his camera with such loving intensity on his own chiselled frame that it’s almost a sort of camp classic. Some of the conversation and physicality between Creed and Rocky is almost laughable in its inadvertent homoeroticism.

Then there is plenty of dumb stuff as well. I’d totally forgotten this film showpieces a robot servant whom Rocky’s brother-in-law Paulie (Burt Young) spends most the film treating like a hen-pecking wife. This robot is a bizarre sci-fi addition to the story, which seems to have walked in from a different film.

The fighting when it comes is pretty good, I’ll give it that. Yes literally everything in the boxing ring is so predictable you could write it down in advance, but as always there is something quite moving about watching Rocky take such punishment to emerge as victor. Heck even the Soviet crowd start chanting his name (take that Cold War!). But it’s fine. Drago isn’t even a character (he doesn’t even really have any lines), but that doesn’t really matter as its Lundgren’s size and strength that sells the show (he towers over famously titchy Stallone).

Rocky IV is predictable hokum, that offers precisely zero surprises and must have taken a wet weekend to write. Its bizarre robot sub plot, matched with the endless music videos, montages and flashbacks to old movies, shows that the well was pretty much dry by the time this film came around. But you know the formula still sorta works, and you still cheer as Rocky turns an epic pummelling into triumph. Carl Weathers is pretty good, Creed’s death is as strangely affecting as it is totally ludicrous (never in a million years, by the way, would either of the fights in this film be allowed to continue) but Rocky IV’s okay. And of course it ended the Cold War.