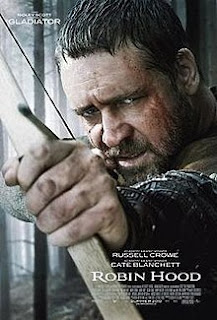 When this film was developed, it was a CSI style medieval romp called Nottingham. Russell Crowe was cast as the film’s hero – an ahead-of-his-time Sheriff of Nottingham, busting crimes in Olde England and dealing with rogue thief (with good press) Robin Hood. Yes that really was the original idea. Mind you, it would at least have been more original than what we ended up with after Scott and Crowe had a bit of a rethink.

So here we are: Robin Hood: Origins (as it might as well have been called). Russell Crowe is Robin Longstride, on his way back from the crusades as an archer in the army of King Richard (Danny Huston) army. When Richard is killed at a siege in France (it was one last siege before home – what are the odds!), the messengers carrying the news back to France are ambushed and killed by wicked Sir Godfrey (Mark Strong). Robin finds the bodies and assumes the identity of Sir Robert Locksley, travelling to England to tell Prince John (Oscar Isaac) the news of his succession – then returning to Nottingham with his friends, where Robert’s father Sir Walter (Max von Sydow) asks him to continue pretending to be Robin for dull tax reasons – and soon feelings develop between Robin and Sir Robert’s widow Marian (Cate Blanchett). But John is intent on farming the land for taxes, and Sir Godfrey is in cahoots with the French to conquer England.

Robin Hood is a semi-decent, watchable enough retread of a story so totally and utterly familiar that even the things it rejigs end up feeling familiar. In fact, to be honest you sit watching it and wondering why on earth anyone really wanted to make it. Scott brings nothing original and different to it, and the film looks like a less visually interesting retread of Kingdom of Heaven. Plot wise it’s empty. What’s the point of it all? It slowly shows us all the pieces of the Robin Hood myth coming together, so best guess is that it was intended to be the first of a series (there seems to have been no interest or demand for a sequel of any sort).

And then we’ve got Russell Crowe. Leaving aside everything else, Crowe looks about 10 years too old for the part. He delivers some sort of regional accent that meanders from Ireland to Yorkshire in its broadness, a laughable stumble around the country. Crowe does his slightly intense, sub-Gladiator mumbles and stares at the camera and attempts to suggest a deep rooted nobility, but actually comes across a bit more like a snoozing actor awaiting a pay-cheque.

Cate Blanchett does her best, lending her prestige to the whole thing in an attempt to make it land with some dignity (she of course does the opening and closing narration, which struggles to add some sort of grandeur to the whole flimsy thing). She’s saddled with a Maid Marian who is granted various “action” moments, but still has to be saved by Robin and face possible rape from a leering Frenchman (at least she saves herself from that one).

It also doesn’t help either actor that their romance plays out in the dull middle third of the film, where the plot grinds to a halt as we deal with Sir Walter (Max von Sydow almost literally acting blindfolded) using Robin as some sort of tax dodge scheme. The film is overloaded with characters, all of whom are separated at this point and struggling manfully to make their disconnected plotlines interesting: so we get John dealing with the pressures of office, Sir Godfrey scheming and looting, William Marshal trying to find a middle ground, Robin and Marian falling in love – it’s a mess. On top of this a get a ludicrous reworking of the Magna Carta as some Medieval version of the Communist Manifesto (it’s written by Robin’s executed dad no less, giving him a bizarre “painful backstory” to overcome). None of these plots really come together, and so little time is spent with each of them that they all end up getting quite boring.

The film culminates in a totally ridiculous battle scene on a beach, as Sir Godfrey’s French allies arrive on the shores of medieval England in some sort Saving Private Ryan landing craft. The tactics of this landing and the battle that ensues are complete nonsense. Every single character rocks up at this battle, which should feel like all the plot threads coming together but instead feels like poor script-writing. When Marian turns up, disguised as a man (how very Eowyn), leading a group of warrior children (I’m not joking) who feel yanked from the pages of Lord of the Flies, it’s just the crowning turd on this nonsense.

And all this fuss to defeat Sir Godfrey? Why cast Mark Strong and give him such a nothing part? Sir Godfrey is a deeply unintimidating villain. Everything he does goes wrong. He is bested in combat no less than three times in the film (once by a flipping blind man!). His motivations are never even slightly touched upon. He has less than one scene with John, the man who he is supposed to be manipulating. He runs away at the drop of a hat and Robin gets the drop on him twice on the film. He’s neither interesting, scary or feels like a challenging adversary or worthy opponent.

But then nothing in this film is particularly interesting. The set-up of the merry men around Robin (they seem more like an ageing band of mates on tour by the way than folk looking to rob from the rich and give to the poor) is painfully similar to dozens of other film, particularly in the Little-John-and-Robin-fight-then-become-brothers routine. Crikey even Prince of Thieves shook up the formula by making Will Scarlet Robin’s brother. Scott is going through the motions, like it was one he was committed to so needed to see through to the end despite having long-since lost interest. It’s not a terrible movie really, just a really, really, really average one with a completely miscast lead and nothing you haven’t seen before.
Email ThisBlogThis!Share to TwitterShare to FacebookShare to Pinterest
Labels: 2010, Cate Blanchett, Danny Huston, Eileen Atkins, Historical epics, Lea Seydoux, Mark Addy, Mark Strong, Matthew Macfadyen, Max von Sydow, Oscar Isaac, Robin Hood, Russell Crowe, William Hurt