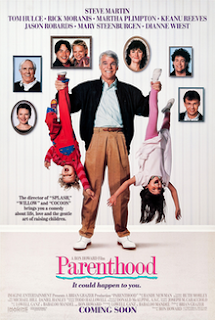 If there is one thing everyone knows, it’s that families can be complex. That’s why good films about family life resonate so well – everyone (and I mean everyone) can find something in it that echoes with their own experiences. Parenthood is very good at this sort of thing, an entertaining but also tender and rather sweet comedy-drama about an expansive family and their many triumphs and problems.

Frank Buckman (Jason Robards) is the patriarch, a distant father with four children all now raising families of their own. Gil (Steve Martin), married to Karen (Mary Steenburgen), desperately wants to be the perfect dad he feels his own never was, but is struggling with the increasingly apparent emotional problems in his oldest son, 12-year-old Kevin. Helen (Dianne Wiest) is divorced, her ex-husband wants nothing to do with their children. Her son Garry (Joaquin Phoenix) is a socially withdrawn teenager, while her elder daughter Julie (Martha Plimpton) isn’t interested in education only in her relationship with gentle but useless Tod (Keanu Reeves). Susan (Harley Kozak) is married to Nathan (Rick Moranis) who is obsessed with turning their young daughter into a child prodigy. Frank’s favourite son is the feckless Larry (Tom Hulce), a wastrel sponger who turns up after years with an unexpected young son, Cool, in tow, in whom he shows little interest.

You can see just in that quick summary you’ve got a huge array of issues for the film to tackle, all of which it manages to do with sweetness, humour and also a certain amount of emotional truth. The film manages the ups and downs, the flat-out comedy and the heartbreak with real confidence, meaning you are moved smoothly from broad laughs to genuine “ahs” of sweetness.

With the exception of the shallow and selfish Larry (every family has that black sheep), each of the characters has moments to demonstrate their depth and truth, showing sides of themselves you wouldn’t expect. In a large-cast film that delivers in a tight, well-structured two hours, that’s quite an accomplishment to be honest.

Ron Howard directs all this with fabulous control, a reminder that he’s actually quite a skilled director of comedy, with a good sense of timing and pacing. He’s also a superb director of actors, and there isn’t a weak link in the whole cast, from the youngest child actor to the most experienced Broadway veteran.

Steve Martin is fabulous as the centre of the family saga, the dad desperate to be the best dad he can be, but who overly worries and obsesses about every detail to try and be as perfect as possible. Martin is ace at this sort of stuff, this gentle comedy grounded in reality, and totally understands how to make a character feel real and grounded. Combine that with his natural comic chops and willingness to embrace the absurd at moments – showcased here in a sequence where he desperately has to cover for a missing entertainer at his son’s birthday party – and he supplies many of the film’s stand out moments.

Dianne Wiest (Oscar nominated) also manages a difficult balancing act in perhaps the film’s most interesting set of plotlines. Helen’s family covers the full range of teenage trauma, from a loving son who seems to turn overnight into a monosyllabic stranger to a daughter who rejects all her mother’s hopes for the future in order to spend time with a boy she doesn’t approve of. Wiest is not only extremely funny in some of her responses to these problems, but also heartrendingly real in her pain, confusion and frustration at not being able to help her children (or herself) as much as she wants, as well as the clear feeling that her life is somehow a failure compared to her two elder siblings.

What’s also beautiful about the film is that none of these events or storylines work themselves out quite as you might expect. Young Garry (played excellently by an impossibly young Joaquin Phoenix, here billed as Leaf) has clear reasons for his feelings and is dealing with complete lack of interest his father shows in his life. Julie (Martha Plimpton, very good) isn’t the layabout teen you might expect, and has genuine feelings for Tod – who, under Keanu Reeves’ sweet, slacker style, is a man of far greater emotional depth than might be expected.

The other plotlines of the film are secondary to these, but are still wonderfully played and put together. The Moranis/Kozak plotline of “I’m an ignored wife who wants another baby” v “I’m trying to turn our daughter into a genius” is a bit more played for laughs, but the two actors know their stuff and deliver. Tom Hulce channels Mozart as the irredeemable Larry, but works very well with Jason Robards, who expertly portrays a man aware he was not the perfect dad. Again these scenes develop in ways you might not expect – particularly as regards Robard’s character.

The final sequence of the film, showing how the events and lessons of the film have changed the family but brought them together in different ways, and how they have changed and learned, should feel manipulative and pat, but because the whole film is done with generosity and warmth it actually brings a small tear to the eye with its sweetness and warmth. Parenthood isn’t perhaps remembered quite as well as it should be – but it’s a film that never fails to deliver and always leaves you feeling better about yourself. And you can’t ask more than that.
Email ThisBlogThis!Share to TwitterShare to FacebookShare to Pinterest
Labels: 1989, Comedy, Dianne Wiest, Family drama, Jason Robards, Joaquin Phoenix, Keanu Reeves, Martha Plimpton, Mary Steenburgen, Rick Moranis, Ron Howard, Steve Martin, Tom Hulce