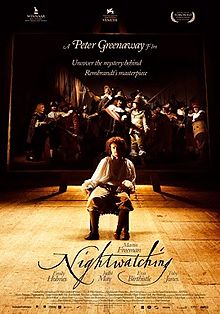 There are few artists who have such a distinctive visual style as Rembrandt van Rijn, perhaps the greatest of the Dutch masters. And there are few filmmakers with such distinctive style as Peter Greenaway. So this film is a sort of perfect marriage: Greenaway, the man who claims most of the world is visually illiterate and incapable of understanding the grace and depth of visual images (be they film or painting), taking the secret language of Rembrandt’s paintings.

Rembrandt (Martin Freeman) is hired to paint the Militia Company of District II. There is, however, a conspiracy in the company. Captain Hasselberg (Andrzek Seweryn), the original commissioner of the painting, is killed, seemingly in an accident, and replaced by Frans Banning Cocq (Adrian Lukis) and his lickspittle deputy Willem van Ruytenburch (Adam Kotz). Rembrandt believes the accident was in fact murder, removing Hasselberg so that the other members of the militia can profit in a financial deal with the British government (I won’t go into the details). Alongside this, the film also looks at the personal life of Rembrandt and his relationship with his wife Saskia (Eva Birthistle) and, after her death, his maids and mistresses, Geertje (Jodhi May) and Hendrickhe Stoffels (Emily Holmes).

Peter Greenaway is a visual stylist that’s for sure. The film takes place (apart from a few outdoor sequences in a forest) in a sort of representative set that looks a bit like a combination of a theatre stage and the bare framework of a Dutch interior painting. The camera frequently uses the width of the frame to squeeze in full-body shots of its characters, and the width and depth of the room, to try and replicate as much as possible the look and feel of these artworks. An early discussion of colour (and how to describe it) is illustrated by Geertje opening curtains in a representation of Rembrandt’s bedroom, with each colour (red-yellow-blue) in turn flooding the room from the open windows. The film looks distinctive and impressive, the costume design is meticulously researched, and the artful framing to ape the conventions and styles of Rembrandt’s painting is extremely well done. 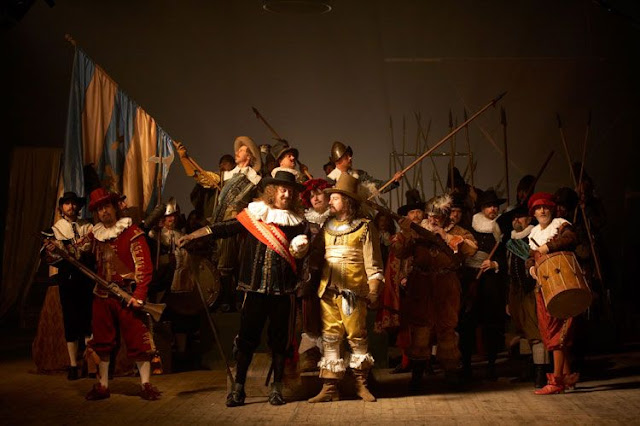 What is less well done is the actual story itself, which is largely inert and frequently dull, and takes ages to outline what is, to be honest, a not particularly interesting conspiracy. It then intercuts this with scenes and moments from Rembrandt’s domestic life, but never ties the two of these together into something coherent. Too immersed in the details of the case to be the sort of dream-cum-fantasy of previous Greenaway films like The Draughtman’s Contract, and too preoccupied with the director’s narrative laxity to become a proper character study or piece of investigative fiction, the film rather uncomfortably falls between two stools becoming neither one thing or the other.

In fact, you almost sense Greenaway’s heart wasn’t really in it, that he really wanted to make Rembrandt J’Accuse, the companion art lecture illustrated with moments from this film, which really goes to town on his conspiracy theory. The details of the conspiracy (extremely hard to follow here) are at least easier to follow in Rembrandt J’Accuse, where they make a batty but enjoyable Dan Brownish argument – even if it is based on hands being drawn “without commitment” and elastic interpretations of visual language. To be honest, for all that Rembrandt J’Accuse is a bit odd – and that Peter Greenaway has an air of an ultra-pretentious Johnny Ball in his addresses to the camera – it actually makes a far more compelling piece of cinema than the narrative film it sits alongside.

Which is a shame because, as well as the design, there is a lot of good stuff here, not least in the performance of Martin Freeman. Cinema and TV’s eternal nice-guy gets to stretch himself fantastically as an electric, compelling genius overflowing with passion, ideas, intelligence and a chippy (frequently foul mouthed) confidence, mixed with an insatiable sex drive and nose-thumbing defiance. Freeman really gets the sense of a complex, earthy, fiery man who knows he is the smartest man in the room, and is extremely cocky with it – but also has a keen sense of justice and decency. It’s about a million miles away from Tim or Bilbo, and a big reminder that he is a hell of a performer. 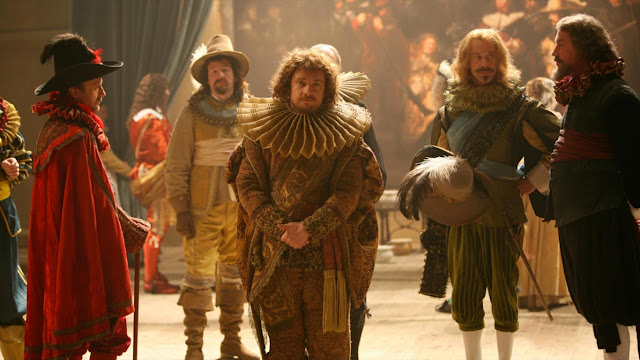 Put Freeman in with the thrilling design and painterly flourishes of the film, and you’ve got sections that are really worth watching. Eva Birthistle is very good as his intelligent and articulate wife, as is Johdi May as his earthy, ill-tempered, sensual lover. Nathalie Press is heart-breaking as an illegitimate girl with a tragic life. Adrian Lukis is particularly smarmy and vile as the head of the militia. In fact, most of the performances are great.

It’s just the story is not. Moments of investigation are just building into something logical and coherent when they get interrupted by straight-to-camera addresses (very odd) from the members of the Rembrandt household explaining their personal situations. Just as we start to get invested in the loves of Rembrandt, we get thrown back into the dull conspiracy. When the two overlap, neither is really served. The story frankly isn’t interesting enough. That’s even before you have to wade through the inevitable Greenaway penchant for including as much full-frontal nudity as possible (Freeman and May in particular) and graphic sex in multiple positions and orifices. I mean, I get it, Rembrandt was a lusty guy but do we need to keep seeing it?

Nightwatching is a bizarre oddity – a vehicle for a commanding lead performance, with an actor cast way against type, that never decides whether it is some sort of biography of an artist or a secret-history-expose of a conspiracy forgotten by time. As always with conspiracy theories you suspect the obvious-but-dull is probably the truth – Rembrandt delivered a painting that was so radically different from the dull line-up paintings of this genre that it shook up the art world (not in a good way) and then he fell out of fashion, didn’t have a good understanding of money, and went bankrupt, rather than being destroyed by a shadowy Amsterdam cabal. Greenaway is so in love with his theories – and his usual lusty and psychological obsessions – that he ends up with something that is neither a drama or an art lecture but somewhere in the middle with the worst aspects of both.
Email ThisBlogThis!Share to TwitterShare to FacebookShare to Pinterest
Labels: 2007, Adrian Lukis, Artist biography, Emily Holmes, Eva Birthistle, Jodhi May, Martin Freeman, Natalie Press, Peter Greenaway, Toby Jones