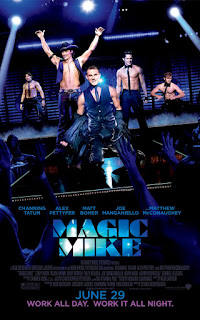 The formula for Magic Mike is basically an all-boys Coyote Ugly mixed with a 1970s blue-collar social drama. But a blue-collar social drama where collars might be all the men are wearing. Based on Channing Tatum’s own experiences as a stripper back in the day (I’d be fascinated to find out how many of the things in this film Tatum got up to when he was a lad), Magic Mike follows the story of Mike Like (Tatum), a brilliant stripper who dreams of setting up his own bespoke furniture company (if that’s not an insight into the sort of eccentric film this is, you’ve got it there!). Meeting young Adam (Alex Pettyfer), he takes the kid under his wing and inducts him in the world of strip clubs. Adam gets a taste for the life, while Mike gets a taste for the company of Adam’s disapproving sister Brooke (Cody Horn). So mentor and mentee gradually find themselves drifting towards trouble.

Magic Mike is good fun mixed with some pretty standard low-rent crapsack world problems, as small-time crime and drugs intrude on the otherwise gentle world of professional male stripping. Magic Mike is essentially a sort of fairy tale, which wants to enjoy the dynamism of performing on stage while also casting a disapproving eye on its hedonism and emptiness. It’s the sort of film which wants to show what a great time you can have living that lifestyle in the short term, while also praising its hero for realising he wants more. You might think (and it has been sold and partially recut) into a hot stripping film, but deep down it wants to be a 1970s social issues drama. It just never quite gets there, because it doesn't have the depth and can't escape the cliches of coming-of-age dramas.

So it’s not exactly the most revelatory film in the world. What’s most interesting is that often in these films it’s the mentor who leads the mentee astray. Here, it’s the mentor who finds his life gradually being damaged by the mentee. Mike is basically a kind, decent guy who just hasn’t really grown up. Adam, whom he brings into the stripping world, is basically a shallow, lazy, increasingly selfish person who is only interested in himself. While deep down Mike knows that stripping and all its hedonistic temptations are only a means to an end, for Alex it is the end, and he wants to lead this sort of life forever.

Mike’s basic charm works so well because it’s rooted in Channing Tatum’s own charm as a performer. He has a sweet, puppydog quality as well as a fundamental little-boy-lost innocence, which should seem strange for a bloke who rips his clothes off and gyrates semi-naked on a stage in the laps of cheering women. But it makes sense. The show is a brilliant showcase for Tatum, not only showing his acting and performing strengths but also showcasing his dancing and movement skills. As well as, of course, his chiselled torso. The film front and centres a rather sweet will-they-won’t-they with Mike and Alex’s sister Brooke, played with a sweet firmness by Cory Horn. And there are a host of other excellent performances, not least Matthew McConaughey stealing scenes as club owner Dallas, hiding his greed under a domineering bonhomie.

The film stops frequently for elaborate stripping scenes in manager Dallas’  club. These are put together with real wit and engagement, and while the film never really explores the issues in stripping (no touching from the guests, performance enhancing drugs, the hedonistic openness etc. etc.) it does make a change to see the men of the film being treated entirely as sex objects and not the women (or at least not as much, this still being a film that opens with a semi-nude Olivia Munn). Soderbergh though has always been a proficient technician rather than the sort of intelligent artiste he would like us to think he is, so it’s a not real surprise that most of the film is more flash than depth.

So that’s perhaps why the film largely settles for being a standard “man needs to grow up and leave his old life behind” and “young buck goes out of control” story. The structure of this, and its air of kitchen sink drama as we see Mike struggle to get a loan to start his business, or deal with a stripping event gone wrong as Alex brings drugs to a private party, is something that contrasts nicely with the more dynamic stuff in the club. All this is pretty standard arc material – and Soderbergh’s film dodges really drilling down into some of the issues it touches on.

Magic Mike is a fun film with a touch of depth, that wants to combine a character study with a study of its stars’ characterful bodies. It only touches upon some of its themes, and tells a fairly traditional story under all that. But it's got a sort of charm, and it delivers its cliches with aplomb. But then I'm not sure I'm quite the target market for it.
Email ThisBlogThis!Share to TwitterShare to FacebookShare to Pinterest
Labels: 2012, Alex Pettyfer, Channing Tatum, Cody Horn, Matt Bomer, Matthew McConaughey, Olivia Munn, Steven Soderbergh