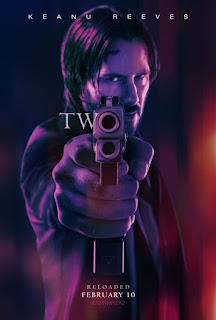 It’s that age-old story: every time you think you’re out, they drag you back in. Well that’s what we get with John Wick (Keanu Reeves). Picking up where the last film stopped, Wick is approached by mafioso head Santino D’Antonio (Riccardo Scamarcio) who wants Wick to assassinate his sister, who has been promoted to head of the business over him. Eventually (after much pressure) Wick agrees – and quickly finds himself betrayed and on the run.

The first John Wick has a real charm about it, the sort of film you can really enjoy because tonally it gets itself absolutely spot on. It’s a lot of action fun, it manages not to take itself too seriously and it sets its hero up as someone very sympathetic who only goes on a rampage of violence under extreme provocation. The sequel attempts to double down on all of this and give us more of the same – but not always to the same impact.

Part of the issue is that there just isn’t the same engaging story at the heart of it. I totally understand John Wick in the first film, and completely got what it was that he was doing in the film – that essentially avenging his dog was about getting revenge on those who had taken the only thing he had left from his relationship with his wife. Here the lines are a lot more blurred – John basically saddles up under extreme provocation and blackmail and then basically spends the film killing people left, right and centre – first for someone else, then to get revenge for being betrayed back into this life (or something like that), and then finally because he's just really pissed.

It’s another of those films made for YouTube clips. The action scenes can pretty much be watched and enjoyed without the burden of trawling through the nonsense plot, so you might as well hunt those down online and watch them alone. They’re really well done, extremely well shot and pretty exciting (if covered in claret). The rest of the film you can take or leave to be honest.

That’s despite all the best efforts of those involved. Keanu Reeves still brings a slacker charm to the role, even if it’s one that doesn’t stretch even his limited acting range. Ian McShane has a decent, fun turn as an influential member of a shadowy criminal organisation. We even get a rather dry Matrix reunion between Reeves and Fishburne. It’s very well directed and there are occasional good jokes.

However, it lacks a decent villain (Scamarcio as a Mafia baddie is singularly uninspiring), it goes on too long and, most of all, it’s just not quite as good as the first film. There the “world building” around the edges of the film was a fun aside from the action. Here it’s the focus – with strange councils and mystical rules all over the place – and that just doesn’t quite work as well.

John Wick 2 is fun, don’t get me wrong. But somehow it feels less charming and more bloated, something that is starting to feel itself a little too important and, in throwing more and more at the screen, means you lose the heart of some of the original.
Email ThisBlogThis!Share to TwitterShare to FacebookShare to Pinterest
Labels: 2017, Action Films, Chad Stahleski, Claudia Gerini, Common, Franco Nero, Ian McShane, Keanu Reeves, Lance Reddick, Laurence Fishburne, Peter Stormare, Riccardo Scamarcio, Ruby Rose