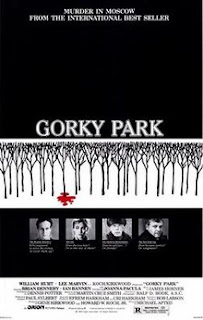 Martin Cruz Smith’s novel Gorky Park was a bestseller in the early 1980s. It looked at grim goings-on behind the Iron Curtain, a trio of grisly murders in Moscow’s Gorky Park (the bodies are faceless, toothless and fingerless to avoid identification). The murders are investigated by Arkady Renko (wonderfully played in this film by William Hurt), a chief investigator for the Moscow militia who feels out of place in the corruption of Soviet Russia, but is equally scornful of the consumerism of the West. The investigation delves into a complex web of Soviet relationships with American business and the dissident community, not least an American millionaire fur trader Jack Osborne (Lee Marvin), and a would-be defector and possible friend of the victims, Irina Asabova (Joanna Pacula).

What I loved about this film is the novel is a rather overwhelming 500+ pages, but this film is a brisk and pacey two hours – and I literally couldn’t think of a single thing missing. But then that’s what you get when you have a master writer adapting your screenplay. Gorky Park has Dennis Potter, perhaps the greatest British TV writer of all time – and this is a sublime script, which keeps the pace up, covers all the tense greedy wrangling of the villains, and also makes subtle and telling points about the Soviet system, all in a punchier and clearer way than the books. The dialogue is also absolutely cracking, ringing with a brusque, icy poetry, with a brilliant ear for a turn of phrase.

Filmed on location around Helsinki and Glasgow among other places, what the film misses in actual Russian locations (needless to say the Soviets were not keen to host the production of a film that showcased murder and corruption at the heart of their capital city), it makes up for with Apted’s taut direction and eye for the general crappiness of Soviet life. Everything is run down, everything is dirty, everything looks cold and unappealing, even the houses and luxury bathhouses of the party leaders look a bit middle-class and uninspiring. By the time (late in the film) that you find yourself in one of Osborne’s houses you are immediately struck by the quality of the furnishings – it’s literally a different world.

This atmosphere not only creates something a bit more unique, it also allows us to relax and enjoy the quality of Smith’s story. I found it overstretched in the book, but the film gives it an urgency and a sinister creepiness that grips your attention. Apted has a brilliant eye for the little tricks to survive living in a police state, from watching what you say, to carefully placing a pencil in a dialled telephone wheel to prevent bugs from activting. Every moment is well paced and nothing outstays its welcome. Characters are introduced with skillful brushstrokes, and the relationships feel real and lived in. With such strong dialogue, it’s also great they got such good actors to do it.

William Hurt takes on the lead, and he is perfect, affecting a rather clipped English accent (all the Russians speak with various regional or RP accents). With his unconventional looks (part boyish, part stone-like), he looks the part and he totally captures the yearning unconventionality of a character who deep down probably would be a true believer in a good society, but can’t believe in the corruption around him. Far from the stereotypical would-be dissident, Hurt makes him a man who loves his homeland, but not always the people running it. He’s exactly as you would picture Renko in the book – a guy who will go for justice with the bit between his teeth, a semi-romantic hero, no superman (he frequently is bested in combat), who is looking for something to love and believe in.

The rest of the cast are equally fine. Lee Marvin is cast against type as a suave, hyper-intelligent, manipulatively greedy businessman – although his reputation for playing heavies comes in handy when the gloves come off. Joanna Pacula mixes sultry Euro-siren with an urgent yearning for freedom. Ian Bannen is wonderfully avuncular as Renko’s supportive boss (extra points for Tinker Tailor fans that Bannen is reunited here with Alexander Knox, in a dark reflection of their Control-Prideaux working relationship from that series). Michael Elphick seizes on the part of the down-to-earth Pasha, Renko’s friend and comrade, a role greatly improved from the book (largely to give Renko someone to bounce ideas off).

Apted’s film has a great sense of tension and a wonderful feeling for Soviet Moscow’s dark underbelly. The mystery is increasingly gripping and involving as the film goes on – and, in a nice rug-pull, turns out to be about something totally different than what you might expect. Even the final shootout is assembled and shot with an unexpected vibe. It avoids any Cold War pandering – the main villain is a sadistic American allied with Russians, our hero a noble Russian who partners up with a salt-of-the-earth but decent American cop (Brian Dennehy, also very good). For a late night mystery thriller, with a touch of everything thrown in, you can do a lot worse than this. I enjoyed it far more than I expected. I’d almost call it an overlooked B-movie gem.
Email ThisBlogThis!Share to TwitterShare to FacebookShare to Pinterest
Labels: 1983, Alexander Knox, Alexei Sayle, Brian Dennehy, Ian Bannen, Ian McDiarmid, Joanna Pacula, Lee Marvin, Michael Apted, Michael Elphick, Murder mystery, Richard Griffiths, Thriller, William Hurt