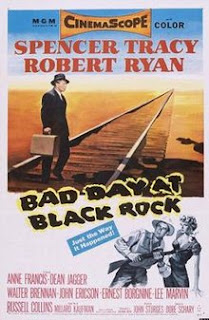 A man walks into a town. It’s a dust bowl town, looks like it’s just one street with a few buildings. The natives sit warily outside the bar and treat the stranger with suspicion. Trigger fingers are itchy. Is it the Wild West? No it’s 1945, but the new guy in town is about to find out just how unfriendly the American West can be. Just as well that, despite only having one hand, he’s more than capable of looking after himself.

Spencer Tracy, perfect as a man of rigid principles and certainties who won’t waver in the face of any intimidation, is our no-nonsense hero Macreedy. Arriving in town, he’s looking for Japanese-American farmer Komoko, father of a deceased colleague from the war, but no one wants to talk about where he is or what happened to him. Sheriff Horn (Dean Jagger) is an alcoholic who doesn’t want to know anything, the local doctor (Walter Brennan) doesn’t want to get involved and hotel clerk Pete (John Ericson) doesn’t want to give Macreedy a home. Macreedy is tailed on arrival by a couple of intimidating heavies (Ernest Borgnine and Lee Marvin – the go-to guys at the time for these sort of roles), and quickly works out the town is run by local businessman Reno Smith (Robert Ryan) – and any secrets it holds ain’t coming out easy.

Bad Day at Black Rock is a classic western, set in a time when the world of the West had been left far behind. American culture has a romantic longing for rural, small-town America, and the heroic past of the pioneers of the old West. Bad Day inverts a lot of this mythology: this America is horribly corrupt, unspeakably racist and hiding no end of dirty linen in its cupboards. In fact, small-town America is horrible, while the man from the big city represents all that is good – that in itself is quite a surprise turnaround from what you might expect from Hollywood.

In many ways it’s a very simple, very gripping, film. Macreedy’s arrival in the town sparks guilty consciences and sets the town bully, Reno Smith, into a quiet, panicked breakdown. We know watching it roughly where the film is likely to go. However, what Sturges does well is to invest this with so much attention. Huge chunks of the film involve both Macreedy and the men of the town, tensely trying to work out what is going on, or watching and waiting to see what opportunities there will be. It’s a film packed with moments of waiting or characters sitting and watching, talking around subjects rather than tackling the big questions they want to ask. It sounds slow but it actually builds up an extraordinary amount of danger and feeling of danger.

It’s a drama that works on the slow burn while also being a very short, snappily paced film. The best part of the first half-hour of the film is the careful establishing of the atmosphere, the relationships between the different characters, and the politics of this Western town. In the middle of this we have Macreedy, the man of mystery whom we know nothing about, who never seems to rise to the unfriendly intimidation he meets from every corner. You know that all this tension is going to erupt into something serious – but the film constantly leaves you guessing exactly how it will pan out and keeps you surprised about who ends up on which side.

You couldn’t get a better actor for this role than Spencer Tracy. There is something so rigidly determined about Tracy in this film, so adamantine and determined – the sort of man who operates in rights and wrongs, who even in this world of intimidation and terror tries to play by some sort of rules for as long as he possibly can. What’s so great about Tracy in this film is that he seems like both a stranger in black and a disappointed dad, with the people in the town constantly letting him down. The film also teases us for a long time – we suspect throughout that Macreedy is more dangerous and more capable of looking after himself than he appears. (It was Tracy who insisted, by the way, that Macreedy be made one-armed, as he thought it could give Macreedy an interesting vulnerability to overcome).

The film makes us wait for its three action set-pieces: a car chase, a bar fight and a shoot-out. But it’s perfect in its patience, because violence always seems like it could burst out at any time. Marvin and Borgnine as the obvious heavies do great work as different types of overt muscle. Robert Ryan as the corrupt guy who really runs the town is especially good as a man who seems, under his dominance, to only just be holding onto his self-control, going to great lengths to prevent himself getting into trouble. It’s a point that Macreedy himself makes – deep down, Smith doesn’t have the guts to do his dirty work alone, and gets his strength from controlling others. All this delicate mixture of guilt and fear that bubbles under the surface of Smith is apparent in Ryan’s excellent performance.

But then no-one in the town is in control. Dean Jagger’s moral weakling sheriff is a drunk and a pathetic loser. Walter Brennan’s (very good) doctor wants to do the right thing, but lacks the guts to do it. John Ericsen’s hotel clerk knows he’s in the wrong, but isn’t brave enough to stand his ground. Their lack of control is in fact the root of the problem – Macreedy would never have suspected there were any dark secrets to uncover in the town if the people there hadn’t treated him with such overt suspicion. Sturges captures this perfectly (even if I think the Cinemascope width of shot isn’t perfect for a film that gets so much play out of claustrophobia and suspicion).

Politically the film is pretty simple – racism ain’t good you know – but as an example of brilliantly assembled Western tension and moral righteousness, mixed with a bit of action, adventure and claustrophobia, it works really well. Brilliantly directed, and very well written as a piece of expressive theatre, this is terrific with some wonderful performances. And front and centre is Spencer Tracy as the ultimate man in black, a man with moral certainty and courage, whom it’s impossible not to admire.
Email ThisBlogThis!Share to TwitterShare to FacebookShare to Pinterest
Labels: 1956, Anne Francis, Dean Jagger, Ernest Borgnine, John Ericson, John Sturges, Lee Marvin, Robert Ryan, Russell Collins, Social issues, Spencer Tracy, Walter Brennan, Westerns