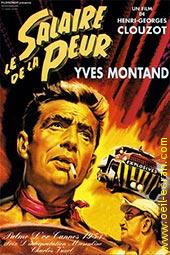 You’re stuck in a dead-end town without the money to get out. There’s been an accident at the local mining company that runs the town. They need to get super-duper, explosive material up there to blast the mine and prevent a fire spinning out of control. The only way to do it is in a truck up a bumpy hill road in the blazing sunshine. The company will pay a small fortune to anyone desperate or stupid enough to do it. Would you collect these Wages of Fear?

That’s the conceit in Clouzot’s slow-burn, tension-packed masterpiece. Mario (Yves Montard), along with several others, is stuck in a dead-end desert town in South America unable to afford the air fare to escape. Mario befriends an ageing gangster Jo (Charles Vanel), now also stuck in the town, and the two of them are tempted to drive trucks full of nitroglycerine (which can explode when hot or under the slightest jolt or pressure) to help put out a massive fire at the local American-owned oilfield. Along with Bimba (Peter van Eyck), a German, and Luigi (Folco Lulli), an Italian, they drive trucks up there – but the pressure affects the men in different ways and the dangers of the drive make it highly unlikely that they will all make it.

The Wages of Fear is the classic slow-burn leading to (literally) explosive tension. It’s almost a full hour into the film before the nitroglycerine makes an appearance, but after that the film lays a constant series of dilemmas in the way of our heroes as they try to make their way 300 miles to the oilfield. Never before has the slightest jolt of a car, or the smallest pot hole, been more wracked with danger. Is it any wonder each of the men go a little insane: who could do this and not be a little cracked in the head?

Clouzot directs this with a sublime brilliance. The film is a masterclass in subtle build-up. The opening act of the film establishes the characters of Mario and Jo (and to a lesser extent Bimba and Luigi). We see them in their natural habitat, and learn to understand their characters so thoroughly, that we are genuinely surprised and a little unnerved about how much they change over that long and dangerous 300 miles. Yves Montard’s Mario is a quintessential cool customer – hanging at bars, treating his girlfriend Linda (Vera Clouzot, the director’s wife) with a distant disdain – but he’s also a man easily influenced, prone to hero worship not least to new-guy-in-town Jo, on whom he has a massive man-crush.

Jo, played with a sustained brilliance by Charles Vanel, is the big fish in the small pond, a small-time gangster lording it over his fellow town-dwellers with an unruffled arrogance. Jo has no interest in anyone else and claims Mario’s allegiance as his right – in fact he takes delight in provoking Luigi, Mario’s previous best friend (crush?). He watches with amused detachment when Mario drops Linda to spend time with him. He openly provokes a fight in a bar with Luigi (Clouzot’s first sequence of bubbling tension, brilliantly shot with an unease and unpredictability that could see almost anything happen once a gun emerges) and makes a big show of his past relationship with O’Brien the oil company representative.

The stage is set for us to see Mario as too laid-back, distracted and indolent to succeed and Jo as a collected, calm and controlling presence made for drama. So it works even better to see these two men change position as the journey continues and fear grabs Jo in a way that seems to surprise even him. Mario, meanwhile, becomes almost ruthlessly focused in his determination to see the mission through to its completion, and increasingly distant from those around him. Because in these life and death situations, there is no time for fear or to mollycoddle the concerned. When a single mistake could kill you all, you can’t afford to waste time on someone too scared to carry on.

Mind you, the opening section of the film brilliantly establishes the desperation these people feel to escape from this dead-end town. A young man, not selected for the driving operation, hangs himself in despair. Bimba states that the slightest horseplay or distraction on his trial run with the truck during the selection process will lead to deadly consequences for the joker – and he’s not fooling around. O’Brien of the oil company makes it clear that the mission is almost certainly suicide – and that the company basically doesn’t care at all about the fates of those selected to go on it: they are completely disposable.

Those selected are both lucky and unlucky – and Clouzot uses a brilliant early sequence to establish the danger of the nitro. O’Brien calmly takes a small sample of it in a shot glass and spills it to destructive effect. As one reviewer said, “you sit waiting for the theatre to explode”. Part of this is the way Clouzot uses the men in the film: they are very much rats on a running track, trapped in a route full of danger, with no release or relaxation from the deadly load they carry. Extraordinary sequences abound in the film's second half, like a whistlestop our of tension setpieces from films. 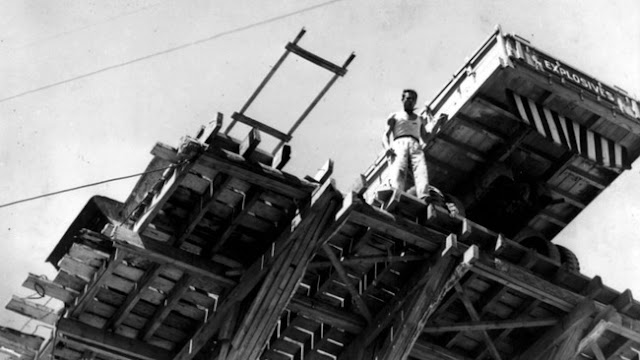 The dangers of everything are doubled because the characters are driving a portable bomb. Moving over a bumpy road – terrifying. Driving round a tight corner on a rickety wooden platform over a cliff – tense enough normally, even more so now. Encountering a road block with a giant stone – guess we need to use some of this incredibly reactive stuff (a brilliant scene as Bimba tenderly pours a small amount of nitro into a drilled hole and rigs up a fuse). Crawling the truck through an oil slick – sublime. And it works so well because the film makes clear that our heroes have no choice at all, they simply must get the money that will come from finishing the mission.

Clouzot totally understands the personal dynamics that underpin these crisis situations. Bimba and Luigi slowly overcome distance to find a real bond between them. Meanwhile Mario and Jo’s relationship disintegrates, as Jo’s cowardice leads to Mario treating him with increasing disdain, contempt and finally disgust. Mario himself becomes increasingly adamantine, fixed on the mission’s success at the exclusion of all other concerns.

Clouzot ends events with a supremely ironical touch, almost darkly comic – but then somehow not a surprise in this film where life is cheap and can literally blow up in your face at any moment. Sublimely directed, and a masterclass in tension and subtle character development, it features a brilliant performance from Charles Vanel and constantly rewards viewing. The Wages of Fear are high – but their price can be even higher.
Email ThisBlogThis!Share to TwitterShare to FacebookShare to Pinterest
Labels: 1953, Charles Vanel, Folco Lulli, French cinema, Henri-Georges Clouzot, Peter van Eyck, Thriller, Véra Clouzot, William Tubbs, Yves Montard