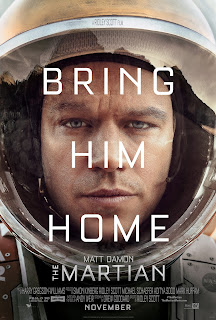 Imagine being abandoned somewhere really difficult to get out of. Now how about being abandoned somewhere where it’s literally impossible to escape? Well you can’t get much more impossible than Mars, a place so bloody difficult it doesn’t even supply you with such luxuries as oxygen, water or food. But that’s exactly what happens to astronaut Mark Watney.

Part of the first manned mission to Mars, Watney (Matt Damon) is struck by debris and presumed killed after a storm forces the crew to abandon their planet. With no one on Earth aware he is alive, Watney faces huge difficulties: the next Mars mission isn’t for four years, and will land over 2,000 miles away. He has only enough food for at best a couple of years, and his Mars Rover can only travel 70 miles before it needs to be recharged. Fortunately, Watney (as well as being incredibly inventive) is a botanist – and works out a complex improvised farm in the base to grow potatoes (the only potential crop he has) as well beginning to modify the Rover to drive to the next mission site in four years. But things change when NASA (after holding his funeral) spot his movements via satellite – and now the race is on to organise a rescue mission.

The Martian perfectly works out what we find appealing about survivor stories: a charming, easy to relate to, protagonist who inspires with his never-ending MacGyver-ish invention. The best sequences by far focus on this, as Watney uses whatever he has available, from radioactive waste to his own shit, to try and save his life. There is something hugely compelling about seeing such inspiration in the face of adversity – perhaps because you want to believe “heck that’s what I would do…”

The first half of the film is crammed with these moments, made even more enjoyable by Watney’s off-the-wall, amusing commentary on events via video diary. Watney never succumbs to despair but instead constantly puts as positive as possible a spin on his situation, aware that opening the door to despair is the road to the end. A lot of this works so well because of Matt Damon’s terrific performance in the lead role. It’s no easy thing basically holding the screen entirely by yourself, but Damon does an amazing job here. He’s not just funny and engaging, but he also subtly touches on deep inner feelings of isolation and loneliness.

Scott understands all this and shoots most of the sequences with Watney with a low-key, calm but technically assured simplicity. He lets the action here largely speak for itself, and shows a better ear for comedy than I think many people thought him capable of. He also uses Watney’s “suit cam” and the video diary format to constantly shake up the visuals and allow us to see Watney’s actions and decisions from different perspectives. His mastery of the sweeping epic comes into its own when the camera swoops over Martian panoramas, making the hostile red planet look unbelievably beautiful. 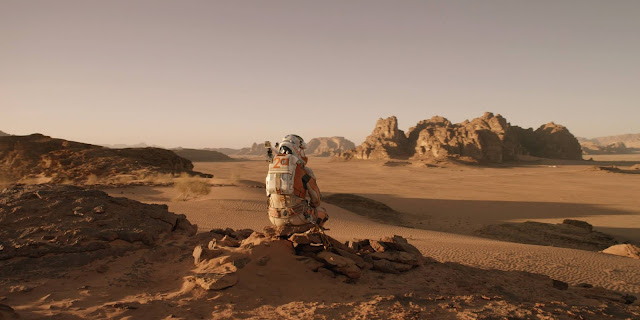 It’s easy to see why NASA supported this film so strongly, as the organisation comes out of this impossibly well. This is essentially a fictionalised retelling of Apollo 13, with the astronauts surviving above, while the ingenious techies below work miracles to first communicate with, and then devise a rescue mission, for Watney. The film is deeply in love with NASA – despite some personality clashes, the NASA characters are all shown to be highly intelligent, compassionate people. Even “the suit”, Director Sanders (played with a square jawed patience by Jeff Daniels), is basically a humanitarian who wants to preserve human life (and is cool enough to have a brilliant Lord of the Rings gag).

Despite this, the struggles of the various bigwigs at NASA to save Watney are slightly less interesting than the opening half of the film based around Watney’s struggles to survive. Perhaps because, well done as it is, we’ve seen this sort of stuff before, done better – not least in Apollo 13 – and partly because what NASA is trying to do is not quite clearly explained in layman’s terms. Think of the simple brilliance of Apollo 13 when the engineers need to create a filter using only what the astronauts have on the ship: it’s easy to understand, clear, brilliant and gripping. Comparative scenes in this film just don’t land as quickly.

The film also struggles as events and twists in the midway part of the movie lead to Watney losing a lot his agency. Since most of the film’s unique enjoyment is seeing Watney conquer his environment, and gain mastery of the rotten hand that fate has dealt him, as soon as that element is removed and Watney turns into more of a man in distress, the film struggles to maintain its unique interest. It makes the second half of the film more conventional (Damon is noticeably in this much less, considering how much he dominates the first half) and also ends up comparing unfavourably with other, better films (sorry I mean Apollo 13 again…)

But The Martian is crammed with good lines, fine jokes and some good performances – even if some of the characters seem a bit sketchily drawn. Benedict Wong is very good as NASA’s top techno bod. Chiwetel Ejiofor and Sean Bean do well as the most clearly sympathetic senior NASA bods. Up in space, the rest of the crew are very lightly sketched, but Jessica Chastain gives a fine sense of authority to the Mission Commander. But make no mistake this is Damon’s movie – and he dominates both the audience’s interest and the film’s.

The Martian is a very well made, intelligent crowd-pleaser. It’s not a classic – and it’s slightly in the shadow of better movies – but it’s brilliantly put together and hugely engaging. The second half of the story is less compelling and more conventional than the first, but there is more than enough invention and enjoyment there for you to want to come back and see it again.
Email ThisBlogThis!Share to TwitterShare to FacebookShare to Pinterest
Labels: 2015, Benedict Wong, Chiwetel Ejiofor, Donald Glover, Jeff Daniels, Jessica Chastain, Kate Mara, Kristen Wiig, Matt Damon, Michael Pena, Science fiction, Sean Bean, Sebastian Stan, Space programme